The Latest: McCaskill says she’ll vote no on Kavanaugh

WASHINGTON (AP) — The Latest on Supreme Court nominee Brett Kavanaugh and the woman who accuses him of sexually assaulting her decades ago (all times local):

Missouri’s Democratic Sen. Claire McCaskill says she will vote against the nomination of Brett Kavanaugh to the Supreme Court, depriving President Donald Trump’s nominee of a possible swing vote.

McCaskill calls the recent sexual assault allegations against Kavanaugh troubling, but says she based her decision on the judge’s views on issues like presidential power and “dark money” in campaigns.

McCaskill is the first of five undecided Senate Democrats in competitive re-election races to come out against Kavanaugh.

Her decision had been awaited by those watching her close re-election battle with Republican Missouri Attorney General Josh Hawley, who has urged Kavanaugh’s swift confirmation.

A vote on Kavanaugh has been delayed by the accusation from Christine Blasey Ford that he sexually assaulted her when they were teens. Kavanaugh says that accusation is false. 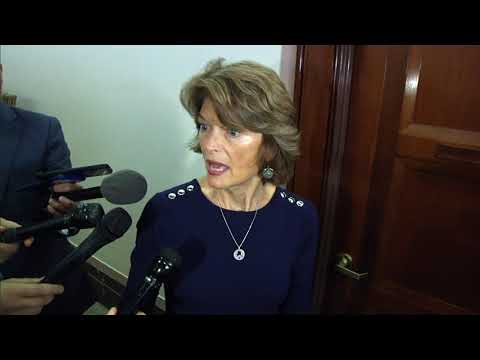 The lawyer for Christine Blasey Ford says there are “multiple witnesses” who should be included in a Judiciary Committee hearing about her client’s allegations of sexual assault by Supreme Court nominee Brett Kavanaugh.

Lisa Banks said Wednesday that Ford was “reluctantly thrust into the public spotlight only two days ago” and is unable to go home because she is receiving “ongoing threats to her and her family’s safety.”

Kavanaugh has denied sexually assaulting Ford when they were teens. Both had been asked to testify Monday at the Senate Judiciary Committee. But Ford wants “a full non-partisan investigation.”

A hearing with just Ford and Kavanaugh “is not a fair or good faith investigation,” Banks says. She says the rush is “unnecessary” and Ford should have “time to deal with this.”

Relatives of Christine Blasey Ford have signed a letter supporting her decision to come forward with an allegation that Supreme Court nominee Brett Kavanaugh sexually assaulted her three decades ago.

Ford’s mother-in-law, sisters-in-law and other members of her husband’s family released a letter Wednesday asking that her “private and difficult recollection be treated seriously and respectfully.”

Ford says Kavanaugh assaulted her at a party when the two were in high school, which Kavanaugh denies.

The letter signed by 11 of Ford’s in-laws describes her as a loyal, reliable, involved family member who “has acted bravely by voicing her experiences from the past, and we know how difficult this is for her.”

The Senate Judiciary Committee scheduled a public hearing on the allegations for Monday. Ford wants the FBI to investigate her claim.

The Republican chairman of the Judiciary Committee says he has sought interviews with “two other alleged witnesses” over Christine Blasey Ford’s accusation that Supreme Court nominee Brett Kavanaugh sexually assaulted her when they were teens.

Sen. Chuck Grassley did not name the witnesses in a letter Wednesday. He also rejected Democrats’ request for an FBI investigation.

Democrats are not participating in the Judiciary Committee’s interviews.

Ford and Kavanaugh have been asked to testify Monday. Ford wants an FBI review first.

Donald Trump Jr.’s post earlier this week shows a crumpled piece of notebook paper with a scribbled message: “Hi Cindy will you be my girlfriend, Love Bret.” It has boxes to check for “yes” or “no.”

Trump Jr. wrote: “Oh boy.... the Dems and their usual nonsense games really have him on the ropes now.”

Flake posted the photo on Twitter and wrote: “This is sickening. No one should make light of this situation.”

Christine Blasey Ford says Kavanaugh assaulted her at a party more than 30 years ago. Kavanaugh denies the allegation.

A Democratic senator who is undecided on whether to confirm Brett Kavanaugh says the process for handling Christine Blasey Ford’s sexual assault allegation against the Supreme Court nominee has “gone off the rails.”

Sen. Doug Jones of Alabama said Wednesday that “it’s unreasonable” for the Senate Judiciary Committee to “force her hand without doing the appropriate investigation.”

Kavanaugh denies Ford’s accusation that he assaulted her decades ago when they were teens. Both Kavanaugh and Ford were called to testify before the committee on Monday, but Ford says she wants an FBI investigation first.

But Jones says the FBI is well-equipped to conduct a quick investigation and interview potential witnesses.

The Republican chairman of the Senate Judiciary Committee is offering in a letter to lawyers for Brett Kavanaugh’s accuser to have his panel’s investigators interview her wherever she wants.

That includes having aides interview Christine Blasey Ford in California, where she lives, according to a person speaking anonymously because they weren’t authorized to discuss the plans publicly.

Chairman Chuck Grassley is also setting deadlines. His letter to Ford’s lawyers says his committee’s hearing on her allegations of sexual abuse will begin Monday morning. He says if she intends to testify, she must submit written testimony by Friday morning.

Ford has said she wants the FBI to investigate her accusation before she would testify.

Grassley writes that his panel “cannot commandeer an Executive Branch agency” and ask them to do more work.

Senate Judiciary Committee chairman Sen. Chuck Grassley says the FBI does not need to look into the sexual-assault allegation against Supreme Court nominee Brett Kavanaugh because Republicans are conducting their own investigation.

California college professor Christine Blasey Ford wants the FBI to investigate her claim Kavanaugh assaulted her when they were teenagers, something Kavanaugh denies. Ford says the investigation should happen before a Monday hearing at which she and Kavanaugh are invited to testify.

Grassley rejected that idea Wednesday. The Iowa senator says “no other outside investigation is necessary.”

President Donald Trump also has refused to get the FBI involved.

Republican staffers on the Judiciary panel have interviewed Kavanaugh and sought an interview with Ford. Grassley didn’t provide further details on their investigation.

Committee Democrats have not participated and want FBI involvement.

He said Wednesday it would be “very interesting.”

Trump calls Kavanaugh an “outstanding man” and says it’s “very hard” for him to imagine anything happened.

The Judiciary Committee has scheduled a public hearing for Monday and has invited Kavanaugh and California college professor Christine Blasey Ford to testify regarding her allegation against him.

Ford says a drunken Kavanaugh assaulted her decades ago when they were teenagers. Kavanaugh has denied Ford’s allegation and has said he’s willing to appear before the committee.

Ford’s attorneys say she wants the FBI to investigate her allegation before she testifies.

Hillary Clinton says the White House should request an FBI investigation of the sexual-assault accusation facing Supreme Court nominee Brett Kavanaugh and any refusal to do so by Republicans amounts to rushing to confirm him.

The former Democratic presidential nominee said on MSNBC on Tuesday the relevant precedent is the FBI’s investigation of Anita Hill’s sexual-harassment allegation against Clarence Thomas in 1991. Like Kavanaugh, Thomas strongly denied the accusation against him.

Clinton says that makes it difficult to “avoid the appearance of insult” against Ford. Clinton says she thinks Republicans are trying to put Ford “in the dock and try to rush this through.”

Anita Hill says the Senate Judiciary Committee could be holding a “sham” hearing next week without an FBI investigation of a woman’s sexual-assault accusation against Supreme Court nominee Brett Kavanaugh.

Kavanaugh strongly denies the allegation and has suggested California college professor Christine Blasey Ford’s account could be a case of mistaken identity.

But Hill told ABC she supports Ford’s demand for an FBI investigation before a hearing Senate Republicans have set for Monday. Hill questions whether the Senate hearing “is going to be anything more than just a sham proceeding.”

Hill’s allegation Clarence Thomas sexually harassed her — and the committee’s handling of his confirmation hearings — haunts Washington as a key event that alienated many women. Thomas denied Hill’s account and was confirmed to the Supreme Court.

Lawyers for Christine Blasey Ford say that before she testifies on Capitol Hill next week she wants the FBI to investigate her allegation that she was sexually assaulted by Supreme Court nominee Brett Kavanaugh.

But the chairman of the Senate Judiciary Committee, Iowa’s Chuck Grassley, says an FBI investigation wouldn’t have any bearing on Ford’s testimony so “there is no reason for further delay.” Other Republicans are suggesting that Ford will have only this one opportunity to testify.

On Tuesday, President Donald Trump showered sympathy on Kavanaugh. The president too has rejected the idea of bringing in the FBI to reopen its background check of the appeals court judge.

Ford’s lawyers say she has been the target of “vicious harassment and even death threats” since coming forward with her story.