LOS ANGELES (AP) — Awkwafina became a household name this summer, stealing scenes from the likes of Cate Blanchett and Sandra Bullock in the heist movie “Ocean’s 8” and then as a standout in the cultural phenomenon that was “Crazy Rich Asians.”

But even considering her blockbuster summer, the 29-year-old New York native, born Nora Lum, whose dad wanted her to be an air traffic controller, still feels pretty normal.

“Maybe when I open my phone there’s a couple more followers and a couple hateful comments, but my regular life is still the same. I’m Target pants and things like that,” Awkwafina said. “I love Target pants.”

She never even really planned to go into acting, but a viral rap YouTube video caught the attention of Seth Rogen and Nick Stoller, who cast her in a small part in “Neighbors 2: Sorority Rising,” then she got an independent film, “Dude,” from Olivia Milch, who would go on to co-write “Ocean’s 8,” and the pieces started falling into place. Her latest honor is being named among the Breakthrough Entertainers of 2018 by The Associated Press .

“If this ended tomorrow, I wouldn’t be mad. I’m so grateful. And all of this I never expected,” she said. “I just go along with the ride.” 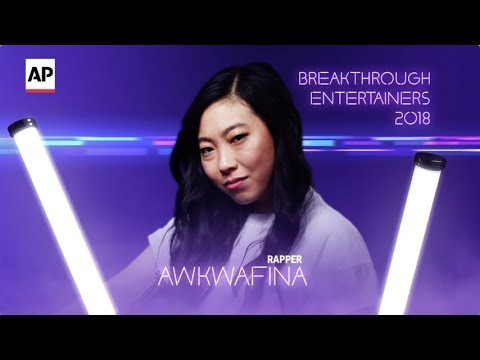 Still, it’s no doubt that Awkwafina is on the rise, with a Comedy Central show based on her life in the works, two films premiering at the Sundance Film Festival this January and, of course, the “Crazy Rich Asians” sequel. She’s gunning for her character, Peik Lin, to get a boyfriend and her own place.

“Peik Lin needs to move out of the house, man,” Awkwafina said. “She lives with the whole family. She’s got to move out.”

The overwhelmingly positive response to “Crazy Rich Asians” was perhaps the most significant moment of this breakthrough year for Awkwafina. The $30 million film has grossed over $237 million worldwide (even despite a lackluster performance in China), and was the first big studio Hollywood production to feature a primarily Asian American cast in 25 years, since “The Joy Luck Club.”

“As an Asian-American kid, growing up I was looking for that movie,” Awkwafina said. “It was very emotional. We were having fun, but there was this lingering collective idea that we were there doing something big. I don’t think we knew how big at the time”

She remembers seeing comedian Margaret Cho on television when she was 7-years-old and having an “ah-ha” moment.

“She was an Asian woman who was so bold, so unashamed and she was funny,” she said. “Seeing her made it possible. And my end goal in all of this is to inspire this next generation because we need more of it.”