Ash loggers race against time before beetles get them all

WALTON, N.Y. (AP) — Loggers in snowy forests are cutting down ash like there’s no tomorrow, seeking to stay one step ahead of a fast-spreading beetle killing the tree in dozens of states.

The emerald ash borer has been chewing its way through trees from Maine to Colorado for about two decades, devastating a species prized for yielding a light-grained hardwood attractive enough for furniture and resilient enough for baseball bats. Many hard-hit areas are east of the Mississippi River and north of the Mason-Dixon Line. Some fear areas in the invasion zone like upstate New York might have only five to seven years of ash logging left.

“Emerald ash borer is probably the most thorough killing machine that we’ve come across in my career over the last 35 years,” said Tom Gerow, general manager for The Wagner Companies, which specializes in furniture-grade lumber.

Wagner is sawing ash at its mills at about double the rate they used to. And out in the woods, there’s often no reason to follow the common practice of leaving trees behind to regenerate the forest.

“When we’re harvesting a stand that has ash in it and you know it’s imminent that the ash borer is going to be there, we tend to cut all of the ash,” Gerow said. 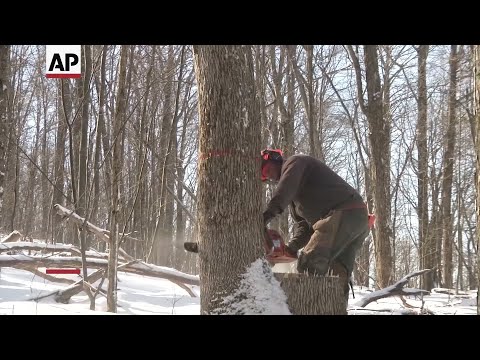 The beetle was first discovered stateside in 2002 in Michigan and has since destroyed tens of millions of ash trees in more than 30 states. It might have unwittingly been bought over from Asia in shipping pallets. No one knows for sure. But it’s clear that the emerald ash borer kills almost every tree it attacks, from thick-canopied suburban shade trees to tall pockets of ash in the woods.

Females lay eggs on ash bark and larval beetles bore looping tunnels just beneath, cutting the flow of trees’ nutrients and water. At the Wagner mill in Owego, New York, squiggly scars from a larval tunnel were partially exposed on a stacked log where the bark came off. The wood inside is still good for lumber, but the markings show the tree was on borrowed time.

Winter is a prime time for logging. The frozen ground and leaf-free trees can make it easier to get to and drag out the logs.

Ash trees being cut down by a crew recently on a snowy hillside in Walton, west of the Catskill Mountains, still looked good. The thick trees shot straight up for dozens of feet before branching out. One freshly felled tree almost knee-high in diameter revealed a roughly 80-ring cross section that looked blonde and healthy.

“Realistically, when you look at this stand here, it could be here,” LaClair said, looking at the towering trees. “We’re just not seeing evidence of it.”

Farther south, the situation is dire. In Maryland, hardwood exporter Mark Lipschitz said he can barely source ash anymore from the southern part of Pennsylvania and Maryland.

“I have a standing order with my sawmill guys,” said Lipschitz, owner of Nina Co. “I just tell them: I will take every stick of ash that you can supply.”

The decline has coincided with reduced demand for ash baseball bats as more sluggers are swinging with maple. But the beetle has been doing its work even as ash wood has caught on in China, which takes in more exported U.S. ash than any other country, according to the American Hardwood Export Council. Ash exports to China slowed last year amid trade tensions and higher tariffs, though the United States and China are working to reconcile their trade differences.

In contrast, there are no signs that the emerald ash borer will stop spreading anytime soon, with even states in the Northwest on guard.

Some see ash following the fate of the American chestnut, a once-prolific tree that was decimated by blight more than a century ago.

George Robinson, a University at Albany biology professor and a member of the state Invasive Species Advisory Committee, doesn’t think the ash will be entirely wiped out. But they’ll be greatly reduced.

“The hope,” he said, “is by collecting seeds and some specimens there will be a future for the ash.”