DENVER (AP) — Tens of thousands of people across the country marched in support of impeachment Tuesday evening, from a demonstration through a rainy Times Square to handfuls of activists standing vigil in small towns around the country.

Liberal groups organized more than 600 events from Alaska to Florida, following a familiar model of mass protest that has come to define the left during the Trump administration. Some of the demonstrators were veterans of other marches, while others were like Glenn Conway of Holly Springs, North Carolina, who was attending his first political rally in 30 years,

“I really believe that the Constitution is under assault. That is not an exaggeration. I think we have a president at this point who believes he’s above the law,” Conway, 62 said.

For all the passion among activists, the gatherings were notably smaller than many of the other recent mass protests that began with the millions-strong Women’s Marches the day after Trump’s inaugural and have ranged over subjects from climate change to gun control.

In San Francisco, Marti McKee, a commercial artist, has been distributing signs and placards to marchers ever since Trump won the 2016 election. She has been struck by how impeachment draws so many fewer people to the streets than other causes. 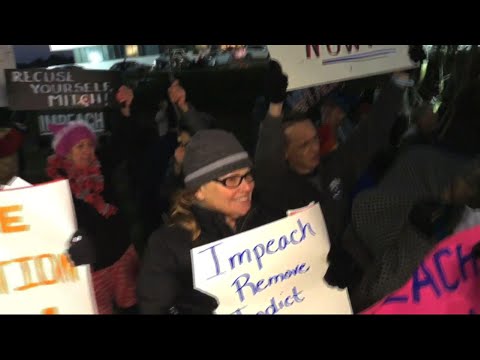 “It’s upsetting, considering that we’re talking about corruption that affects our democracy,” she said. “I don’t understand why everyone isn’t out in the streets.”

In Denver, Thaddeus Bruno, 41, lamented that only a few hundred people had turned out. A friend attributed it to people being “Trump-sick,” or worn out by the controversies surrounding the president.

“Everyone gets Trump-sick,” Bruno said. “You take your Tums and go to the next rally.”

Some activists acknowledge that impeachment doesn’t fire up people like life-and-death issues such as health care, guns or climate change. Recent public opinion polls show the country relatively divided over whether to remove Trump from office for pressuring Ukraine to investigate his political rivals, and the issue rarely comes up on the Democratic presidential campaign trail.

Jonah Minkoff-Zern of Public Citizen, one of the groups spearheading the demonstrations, cautioned against evaluating the impeachment marches purely on head count. He noted they were organized at the last-minute, on a weeknight, to coincide with the scheduled House vote on the two articles of impeachment Wednesday.

“This is a rapid-response mobilization,” he said.

Some were cheered by the turnout in often bitter winter weather.

“All of us have to turn out for this one,” said Joelle Brouner, 46, a disability-rights activist who has cerebral palsy, said in front of the Colorado state capitol in Denver. “If we can’t take action in this particular circumstance, I question whether we will have the separation of powers we need to be a Republic.”

In New York, Tim Harrod of Brooklyn said it was imperative to march and impeach.

“We’ve got an unqualified foreign stooge in the White House with severe, severe doubt that he was even legitimately elected,” he said. “And it’s gone on too long and too far.”

Outside the California state capitol in Sacramento, 10-year-old Everett Pan waved a hand-lettered sign reading “Impeach Liars.” He said he watched the House impeachment hearings as part of an elementary school civics class. “I was impressed. Everybody was very angry with him,” he said.

His mother, Audrey Pan of suburban Davis, said she couldn’t watch because the hearings made her too upset, but she felt it was important to join the rally because “we want to show the country and our representatives that what’s going on is not correct.”

But she didn’t believe the GOP-controlled Senate would remove the president from office even if he is impeached. “People are beholden to this small base of his supporters,” Pan said, “but the majority of the people want impeachment.”

“Activism is a long-term thing, and we need to smile and laugh and show people that we’re people like everybody else and we enjoy the seasons,” said Freeman, a retired research geophysicist. “We find joy in each other.”

Lee Churchill, 55, sat in a folding chair nearby, occasionally shouting out her support for the president. Though she wanted to show her pro-Trump position, she said the demonstration did not bother her.

“I think they have a right to speak out,” Churchill said.

This story has been corrected to show the last name of Tim Harrod, not Howard.