WASHINGTON (AP) — President Donald Trump expressed confidence Friday that a bilateral trade deal between the U.S. and Japan can be reached quickly despite ongoing differences over tariffs as he opened talks with Prime Minister Shinzo Abe at the White House.

Abe is the rare world leader who has managed to develop a personal relationship with Trump. They get along so well that Abe and his wife, Akie, joined Trump and his wife, Melania, for a couples’ dinner Friday in the White House residence to celebrate the U.S. first lady’s 49th birthday. The leaders planned to meet for a quick round of golf Saturday.

But all the friendliness they put on display in the Oval Office didn’t mask their differences over trade. Trump complained about Japan’s tariffs on U.S. agricultural products while Abe aired his frustrations with U.S. levies on Japanese automobiles. Trump has slapped tariffs on steel and aluminum imports from Japan and has held the threat of even steeper auto tariffs over Abe’s head.

Still, Trump sounded optimistic that an agreement will be struck.

“Ultimately, we have a chance to make a good and very long-term trade deal with Japan,” the president said. 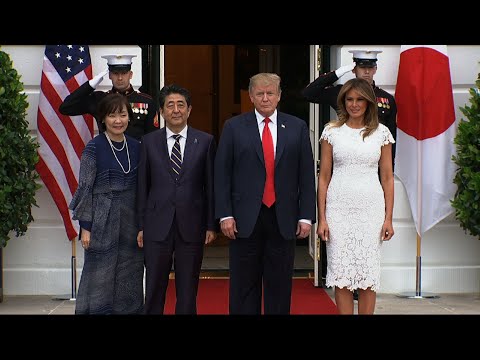 Trump plans to travel to Japan in late May with the first lady for a state visit to meet the country’s new emperor.

In their talks Friday, the two leaders were also expected to discuss North Korea’s nuclear program and efforts by the U.S. and other nations to achieve a denuclearized Korean Peninsula. Trump and Abe met on the heels of Thursday’s nuclear talks between North Korean leader Kim Jong Un and President Vladimir Putin of Russia. Trump’s second summit with Kim in Hanoi in February ended with no agreement, but Trump said earlier Friday that progress is being made.

“I have a great relationship with Kim Jong Un,” Trump told reporters. He said he appreciated help on the issue from Russia and China.

Abe has had more face time and telephone conversations with Trump than any other world leader, said Michael J. Green, senior vice president for Asia and Japan Chair at the Center for Strategic and International Studies.

Abe was the first foreign leader to personally court Trump after he won the 2016 presidential election, visiting the then-president-elect at his Trump Tower penthouse in New York and bringing a golf club as a gift. They share a love of golf and have teed off together both in Japan and the U.S.

The president said he and Abe would head out very early on Saturday to play a “quick round of golf at a very beautiful place on the Potomac River. I won’t name the place, but it’s beautiful.”

Trump said he asked his wife if she’d like the Abes to join them for her birthday dinner “and she said, ‘I can’t think of anybody I’d rather have.’” Abe told Trump: “I do look forward to celebrating this special day with you.”

Trump also discussed some of the details of his planned visit to Japan, including the possibility of attending a sumo wrestling match.

“I’ve always found that fascinating” and “something I’ll enjoy very much,” he said. He said a trophy is being made for him to present to the winner.

The United States and Japan announced in September 2018 that they would open trade negotiations. Talks opened last week.

U.S.-Japan friction over trade mounted after Trump took office and set out to reduce a chronic trade imbalance totaling $67.6 billion in Japan’s favor last year, according to U.S. figures.

Japan — the world’s third largest economy — only reluctantly agreed to the talks with the U.S. as a way to stave off tariffs that Trump has threatened to impose on imported autos. Last fall, Abe said at a news conference on the sidelines of the U.N. General Assembly that the U.S. had agreed not to impose tariffs that had been threatened on Japanese autos. The U.S., however, could still impose the so-called Section 232 tariffs on autos, which would escalate trade tensions.

The trade war is slowing the Japanese economy. Japan’s exports to China fell 9.4% from a year earlier, although exports to the United States rose 4.4%, exacerbating the politically sensitive trade surplus.

Japanese officials have said they made significant concessions on imports of dairy and other farm products in earlier trade negotiations and that’s as far as Japan is willing to go. Japan’s conservative ruling party has traditionally relied on strong support from rural voters and has sought to protect the country’s farm sector from foreign competition.