WASHINGTON (AP) — Americans’ support for mail-in voting has jumped amid concerns about the safety of polling places during the coronavirus pandemic, but a wide partisan divide suggests President Donald Trump’s public campaign against vote by mail may be resonating with his Republican backers.

A new poll from The Associated Press-NORC Center for Public Affairs Research finds Democrats are now much more likely than Republicans to support their state conducting elections exclusively by mail, 47% to 29%.

In 2018, about half as many Democrats were in favor, and there was little difference in the views of Democrats and Republicans on the question.

The survey also found a partisan divide on support for no-excuse absentee voting, the system in place in most states, including almost all the top presidential battlegrounds, even as a majority of Americans say they favor that practice.

The increased partisanship in the debate over how America votes comes just as that question has been thrust into the forefront of American politics. As health officials warn about the risk of spreading the coronavirus at polling places, some in the Republican Party have tried to limit the expansion of mail voting, with Trump and others openly fretting that it may enable too many people to cast their ballots for the GOP to win in November.

All states conduct elections differently, and only five states automatically mail ballots to every voter. But in response to the virus, some states — including Ohio on Tuesday — have shifted their primaries to virtually all-mail elections. On Monday, New York Democrats canceled their presidential primary, which had already been delayed until June 23.

The Republican National Committee has been fighting some of those moves. Republicans successfully petitioned a New Mexico court to block the state from holding its June primary exclusively by mail, forcing the state to open some polling places and only send applications for absentee ballots to voters.

The Republican Attorney General in Texas argued unsuccessfully in a legal case that the coronavirus should not be an automatically accepted excuse for people seeking absentee ballots in that state. 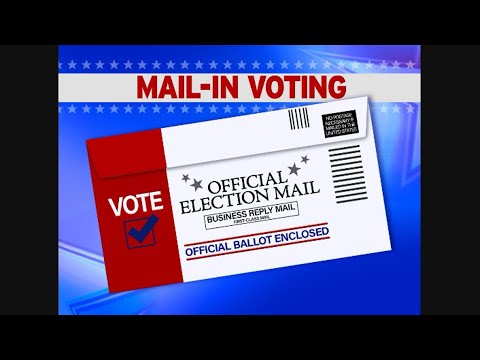 Most prominently, the Republican-controlled Wisconsin legislature rebuffed a last-minute request to hold that state’s April 7 primary and state court election by mail. Democrats won a contested Supreme Court race, but not before shuttered polling locations left voters in long lines at polling places in Green Bay and Milwaukee, where only five of 183 stations were open.

But the debates over the primaries may only be a preview of the partisan battles ahead if the virus is still forcing stay-at-home orders and social distancing in November.

The poll finds that 39% of Americans favor conducting all-mail elections, up from 19% in 2018. Another 40% are opposed. But even more, 48%, favor a move to voting only by mail if the coronavirus outbreak is ongoing in November.

The poll also shows 60% of Americans support allowing people to vote via absentee ballot without requiring them to give a reason if the outbreak is still happening. That includes 73% percent of Democrats and 46% of Republicans. Some 40% of Republicans are opposed.

The partisan differences could have a strong impact across the presidential battleground states. Five of the top seven swing states — Michigan, New Hampshire, North Carolina, Pennsylvania and Wisconsin — have divided government, and skirmishes over voting have already broken out in several. In some, there are signs that Democratic areas are moving faster than GOP ones to embrace mail voting.

In Wisconsin, Democrats have already started to bolster their mail voting operations for November. Reliably Democratic Milwaukee, the state’s largest city, will send every one of its 300,000 voters a request for an absentee ballot. Republicans, who have resisted a similar step statewide, acknowledge that Milwaukee’s move would put them at a disadvantage. “It makes winning Wisconsin harder,” said Andrew Hitt, chair of the state Republican Party, calling for intervention to “level the playing field.”

In Pennsylvania, Democratically-led areas are eager to expand absentee voting, but Republicans seem less so. The second-most populous county in the state, the Democratic bastion of Allegheny, which includes Pittsburgh, is sending absentee ballot requests to all its voters in its June primary.

Brynn Alexander, 36, who just moved with her husband to military housing in Alabama, is one of those who worries about security.

“How do you even identify that the mail got to the right person?” Alexander asked. She added that she favored exceptions for some, like her 70-year-old mother, but preferred votes at the polls.

“It’s going to be better to make everybody feel confident with the results,” she said of in-person voting in the presidential election. “You don’t want one party or the other saying the other side cheated.”

Meanwhile, only 29% of Democrats were worried about fraud being a major problem in an all-mail election, though another 41% described it as a minor problem. Rick Reinesch, a 59-year-old IT technician in Austin, Texas, said Republicans needlessly pump up worries about voter fraud. “It’s trying to kill a gnat with a sledgehammer,” he said.

Paul Miller, 81, of Carlisle, Pennsylvania, is wary of voting by mail. He’s accustomed to going to the polls on Election Day. “I’m just not sold on mail-in voting,” the Republican and retired factory worker said.

But Miller may bow to the reality that he shouldn’t be face-to-face with poll workers anytime soon and cast his vote by absentee.

“I’m not dead set against mail,” Miller said. “I could be persuaded.”

The AP-NORC poll of 1,057 adults was conducted April 16-20 using a sample drawn from NORC’s probability-based AmeriSpeak Panel, which is designed to be representative of the U.S. population. The margin of sampling error for all respondents is plus or minus 4 percentage points.