MILAN (AP) — Italy’s victorious right-wing leader, Matteo Salvini, says the European elections have created “a new geography” of anti-elite sentiment in the EU. But it is far from certain that he will be able to forge a bloc from parties who are united around a strict euroskeptic, anti-migrant, anti-Islam platform, but little else.

Salvini — who saw his once-regional League party surge to win 34% of the vote in Sunday’s European Parliament ballot in Italy from just 6% five years ago — is hoping for to unite 100 to 150 EU deputies into a bloc to fight deeper EU integration in the 751-seat legislature.

He is likely to have many fewer.

The Europe of Nations and Freedom parliamentary group — which includes Salvini’s League among its eight official members, along with the far-right leaders of France, Germany and the Netherlands — can claim 58 seats following the European vote. Far-right National Rally leader Marine Le Pen, who narrowly won France’s European vote, brings 22 seats to add to Salvini’s 28, making them the dominant players in the group.

Salvini is looking to the fiercely euroskeptic leaders in Poland, Hungary and Britain — all the top European vote-getters in their countries — to fill out the ranks of his bloc.

But so far, there is no evidence that leaders from other populist parties will respond to Salvini’s call.

Nigel Farage, the leader of the Brexit Party, won nearly a third of the votes in Britain’s European ballot, doesn’t appear to want any alliances in a parliament that he is planning on abandoning as soon as possible. Poland’s nationalist, conservative Law and Justice party has balked at Salvini’s and Le Pen’s sympathies for Russia, Warsaw’s old nemesis. And Hungarian leader Viktor Orban is showing no signs of abandoning the center-right European People’s Party parliamentary bloc that has been his Fidesz party’s home, despite being suspended from that group over concerns that he has made Hungary less democratic.

Analyst Peter Kreko said Orban risks losing influence in Europe if he steps out of the protective umbrella of the EPP.

“There was no breakthrough of the populist, right-wing, anti-immigration forces,” said Kreko, executive director of Political Capital, a Budapest research and consulting firm. “The big dreams of a huge euroskeptic group seem to have been rather idealistic.”

Salvini also wants to bring in populist parties from the Czech Republic, Sweden and Spain, after receiving pre-election pledges from the Finns party and the Danish People’s Party. But again, even among parties with lower European profiles, there have been no eager takers.

Whether he can overcome what he called these “jealousies, sympathies, antipathies” will be the real test of his leadership on the European stage.

“We have to create an alternative, and to do so, you have to get in the game. You don’t do it by turning up your noses,” Salvini said Monday.

Even when Salvini has cemented his bloc — be it 58, 100 or 150 lawmakers — it will still lack the power to make legislative change. Power in the European Parliament, which sits in both Brussels and Strasbourg, France, will still be concentrated in mainstream groups like the EEP and the center-left S&D, who will have to work with liberal parliament members to create a working majority. 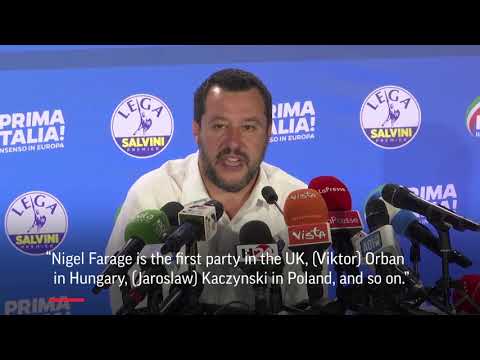 While Salvini is promising to restore sovereignty to EU nations in policy areas as diverse as agriculture, finance and commerce, the reality is those policies have been set by treaties and would require votes in each national parliament to undo, said Eleanor Spaventa, a professor of European law at Milan’s Bocconi University.

“The real impact will be to block any European legislation they don’t like,” she said. “What they can do is to be very destructive.”

Or, as Teneo analyst Wolfango Piccoli put it: “Populist parties will use their European Parliament representation to create noise.”

It’s a prospect welcomed by former White House strategist Steve Bannon, who has advised Europe’s populists. Bannon told The Associated Press that he expected a “super group” of euroskeptic parties would block any attempts to deepen the integration among EU member states.

“Every day will be like Stalingrad,” he said, in reference to one of the fiercest, bloodiest battles of World War II.