Boston cleans up from police protest after night of violence

BOSTON (AP) — Downtown Boston cleaned up Monday after mostly peaceful protests over the killing of a black man by a white police officer in Minneapolis evolved into violence across the nation.

Shop owners and city crews cleared trash and broken glass along Downtown Crossing, a mostly pedestrian shopping and commercial district, as well as the Common, the city’s central park, and the Back Bay, a nearby neighborhood of high-end shops and stately brick townhouses.

Vandals shattered the windows of Clarendon Wines, a Back Bay liquor store, and cleared out much of the alcohol at the front of the shop, said Kayla Levine, a manager. The family, which has owned the store since the 1940s, is tallying the damage.

Levine said she supported the demonstrations but felt others had taken advantage of the situation to cause destruction.

“We never thought this could happen,” she said. “It’s just really sad because the message gets skewed. It’s obvious that people took advantage of good people doing good things to do bad things.”

Thousands marched peacefully through Boston in several protests Sunday in response to the killing of George Floyd, who died June 25 after a white Minneapolis police officer pressed his knee on his neck for almost nine minutes as he was handcuffed and pleaded for air. 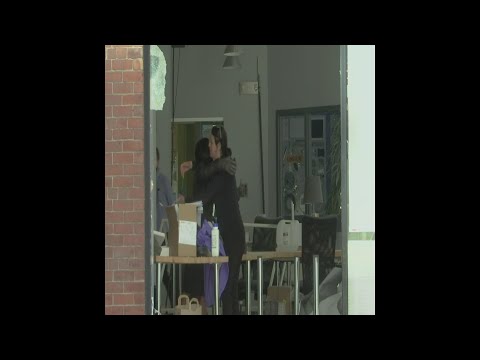 But as the march ended around 9 p.m., protesters and police clashed. People plundered stores, smashed windows, scrawled graffiti and set fire to a police cruiser. The National Guard was called in to help quell the unrest.

Fifty-three people were arrested, about half of them city residents. The rest mostly hailed from other communities in Massachusetts, Boston Police Commissioner William Gross said Monday.

Nine officers were also hospitalized after being pelted with rocks, glass bottles and even fireworks, he said. Dozens more officers and about 18 citizens were also treated for injuries, and 21 police cruisers sustained damage.

Gross, who is the city’s first black police commissioner, was among the state leaders who expressed support Monday for the mostly peaceful protests but frustration at the violence that followed.

“We know what’s going on in our great nation,” said Gross. “Voices have to be heard. Black lives do matter.”

Suffolk County District Attorney Rachael Rollins, who is the first black woman to lead her office, said she sympathized with the injured officers, but said black people are still being killed in the street “as if we’re animals.”

“This burning rage that you’re seeing is real. People are fed up,” she said. “We have been telling you this forever.”

Those arrested Sunday face charges ranging from assault and battery on a police officer and attempted murder to breaking and entering, larceny and disorderly conduct, according to police. Most were to be arraigned Monday.

Democratic Mayor Marty Walsh said the violence was an “attack on our city and its people” that exacted “untold” economic damage to businesses and “cherished” public spaces. Among those structures defaced was a memorial to Massachusetts’ 54th Regiment, a famed unit of black soldiers who fought during the Civil War, he said.

“This was the very last thing that our city quite honestly needed,” Walsh said, noting that the Boston-area is the epicenter of one of the deadliest outbreaks of COVID-19 in the nation.

The mayor pleaded for peace ahead of additional protests planned for Monday evening and Tuesday.

Faith and community leaders say they’ll kneel for nine minutes during a prayer service in the city’s diverse Dorchester neighborhood Monday evening, while the Boston chapter of the Black Lives Matter organization called for rallies Monday and Tuesday evening.

Republican Gov. Charlie Baker, meanwhile, had a sharp response for President Donald Trump, after the fellow Republican called for states to crack down on protesters and dismissed the nation’s governors as “weak” on Monday.

“I know I should be surprised when I hear incendiary words like this from him, but I’m not,” Baker said. “At so many times during these last several weeks, when the country needed compassion and leadership the most, it simply was nowhere to be found. Instead, we got bitterness, combativeness, and self-interest.”

Boston resident Sylvia Kurinsky was among those who came out to Downtown Crossing on Monday to see if she could volunteer to help with cleanup.

She took part in Sunday’s peaceful demonstrations and believed the violence that marred it and others across the country won’t diminish the call for police reform.

“Change is afoot. It will happen,” Kurinsky said. “We’re not going to settle for anything less.”