Accuracy at core of Supreme Court case over census question

Robert Kagan was initially wrongly listed as an “alien,” though he was a native-born New Yorker. The entry about his citizenship status appears to have been crossed out on the census form.

The justices are hearing arguments in the case on Tuesday, with a decision due by late June that will allow for printing forms in time for the count in April 2020.

The fight over the census question is the latest over immigration-related issues between Democratic-led states and advocates for immigrants, on one side, and the administration, on the other. The Supreme Court last year upheld President Donald Trump’s ban on visitors to the U.S. from several mostly Muslim countries. The court also has temporarily blocked administration plans to make it harder for people to claim asylum and is considering an administration appeal that would allow Trump to end protections for immigrants who were brought to this country as children. 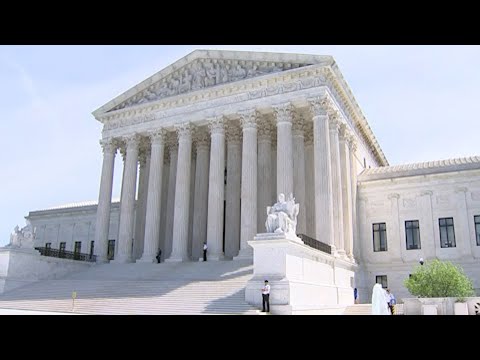 The Supreme Court heard arguments about the government's plan to include a citizenship question on the 2020 census, and their decision could affect federal spending decisions and how apportionment is divided in the House of Representatives. (April 23)

The citizenship question has not been asked on the census form sent to every American household since 1950, and the administration’s desire to add it is now rife with political implications and partisan division.

The three judges have rejected the administration’s arguments that asking about citizenship won’t harm accuracy and that the information is needed to help enforce provisions of the federal Voting Rights Act.

No population count is perfect, and census designers strive to create a questionnaire that is clear and easy to answer.

In older censuses, a government worker known as an enumerator would visit households and record information. In modern times, people fill in their own forms on paper or electronically.

But the potential for errant answers is ever-present, said Debbie Soren, the treasurer of the Illinois chapter of the Jewish Genealogical Society.

“Sometimes people didn’t always want to be forthcoming, including in their ages, for whatever reason. Sometimes there might be a language barrier. Or the person reporting the information might not be the best one to report it,” Soren said.

It seems likely that the census taker himself was responsible for the confusion in Robert Kagan’s citizenship status. Dozens of families who lived near the Kagans have similar crossed-out entries in the citizenship column.

While Kagan’s father was born in the United States, her grandfather, Irving Kagan, was a Russian immigrant who had submitted his paperwork to become an American citizen, the 1930 census shows. By 1940, Irving Kagan was a citizen. The old census forms, through 1940, can be searched on ancestry.com. The 1950 census will become public in 2022.

If past census reports leave a wide berth for error, they still hold a wealth of information, said Sharon DeBartolo Carmack of Salt Lake City, the author of “You Can Write Your Family History.”

Before 1960, the census often asked where people were born and, if abroad, whether they were U.S. citizens. “It’s wonderful to us as researchers, even though we don’t like the politics, don’t like the motivation,” Carmack said.

Kagan is among seven of the nine justices whose ancestors told census takers they were immigrants who had become American citizens. They came from England, Germany, Ireland, Italy and Russia, like so many others seeking a better life.

The fathers of Justices Ruth Bader Ginsburg and Samuel Alito were immigrants from Russia and Italy, respectively.

In the 1910 census, Patrick Kavanaugh, the great-grandfather of Justice Brett Kavanaugh, was living in New Haven, Connecticut, an iron worker who had become a citizen after leaving Ireland in the 1870s.

Two of Justice Neil Gorsuch’s great-great grandfathers, Alex Tiehen and Hugh O’Grady, lived in Nebraska, according to the 1900 census. Tiehen came from Germany in 1845 and O’Grady emigrated from Ireland two years later. By the turn of the last century, both reported they were U.S. citizens.

There are two justices with very different paths to American citizenship. Justice Clarence Thomas is the descendant of slaves and Justice Sonia Sotomayor’s Puerto Rican ancestors became American citizens under a 1917 federal law. Spain ceded the territory to the United States after the Spanish-American War.