Michigan eyed as bellwether for legal pot in Midwest

DETROIT (AP) — Michigan is aiming to build a potentially lucrative industry from the ground up with passage of a ballot initiative to legalize recreational marijuana.

It could do more by serving as a model for the rest of the Midwest — and possibly beyond.

Michigan is the first Midwestern state to legalize recreational marijuana, with voters Tuesday passing a ballot measure that will allow people 21 or older to buy and use the drug. Including Michigan, 10 states and the District of Columbia have legalized recreational marijuana; North Dakota voters decided this week that recreational pot wasn’t for them. 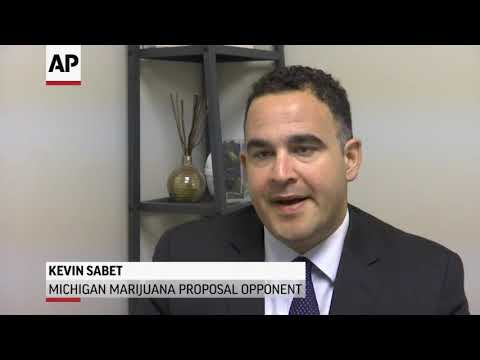 “Michigan is going to be a bit of a bellwether,” said Douglas Mains, a Michigan attorney with Honigman Miller Schwartz and Cohn LLP who, as a former policy and legal adviser for state House Republicans, helped draft the first bills to amend Michigan’s medical marijuana law passed a decade ago.

Mains said Michigan’s progress in building its marijuana sector will be closely watched, particularly by neighbors. He cited Ohio , which allows marijuana for medical uses but rejected a 2015 legalization measure, and Illinois, where the governor-elect supports legalizing pot.

“Those states are going to look to Michigan, see what problems it encounters and revenue it generates,” Mains said. “It would not surprise me if either or both has this on the ballot in 2020.”

The Michigan law takes effect in about a month, 10 days after the election is certified. People age 21 or older will then be allowed to have, use and grow the drug, but the process of establishing regulations for its retail sale and issuing licenses will go into 2020.

The measure, which was endorsed by a national organization of black-owned businesses and a group of retired Michigan law enforcement officers, will create a state licensing system for marijuana businesses and allow cities and townships to restrict them. Supporters say it will raise roughly $130 million in additional tax revenue each year that will go toward road repairs, schools and local governments. They also say it will allow for greater regulation of pot usage and for police to focus on more pressing problems.

Opponents, including many law enforcement agencies, prosecutors, chambers of commerce and religious groups, said legalizing marijuana would lead to increased use by children, drug abuse and car crashes. They also said Michigan’s proposal would be too permissive by allowing people to have up to 2.5 ounces (71 grams) of the drug on them and up to 10 ounces (284 grams) at home.

Mains said establishing the regulatory and retail framework for recreational pot should be easier because of the work that went into sharpening the skeletal, ambiguous medical marijuana law passed in 2008. For example, a 2016 law aimed to address confusion surrounding the legality of dispensary shops that opened after initial passage. He said Michigan policymakers also worked to create a regulated system for medical marijuana “that could be pretty easily replicated for a recreational system.”

Proponents of recreational marijuana laws find greater acceptance in states where medical use has been authorized and a market has developed, Mains said.

“I think it does change attitudes of the electorate,” he said. “Enough people had been familiar with the medical system and had seen that the sky wasn’t falling.”

Kevin Sabet, president of Smart Approaches to Marijuana, a group that opposed the initiatives in Michigan and North Dakota, said money is the driver of the growth.

“I think the marijuana industry is champing at the bit to really spread all across the country. This is about one thing and one thing only, and that’s money — for them,” he said. “They want to get rich. It’s just like the tobacco industry. It’s like pharma. Michigan is seen as a gateway to the Midwest. They failed in Ohio, so they came to Michigan and prevailed.”

Gretchen Whitmer , Michigan’s Democratic governor-elect, said Wednesday that “a lot of states have moved forward,” and she’s expecting to learn lessons from them.

Follow Jeff Karoub on Twitter at https://twitter.com/jeffkaroub and find more of his work at https://apnews.com/search/jeff%20karoub . Find complete AP marijuana coverage at http://apnews.com/tag/LegalMarijuana .