NEW YORK (AP) — Coronavirus deaths soared. New York City playgrounds were targeted for shutdown to help slow an outbreak projected to grow worse for another month. Overtaxed hospitals began transferring patients north of the city. And residents near one struggling hospital have become all too used to ambulance sirens.

“It’s very eerie. I think everyone’s just doing what they can, but at the same time it bothers you. Especially if you’re around Elmhurst because you can hear all the ambulances,” said Emma Sorza, near Elmhurst Hospital in Queens.

NUMBERS UP, NO RESPITE

One month after New York discovered its first infection — a health care worker returning from Iran — the state tallied more than 83,000 positive cases. The 1,941 deaths were up from 965 Sunday morning. New York logged its first virus-related death March 13, an 82-year-old woman with emphysema.

“What we’re looking at now is the apex — the top of the curve — roughly at the end of April, which means another month of this,” Cuomo told a state Capitol news briefing. 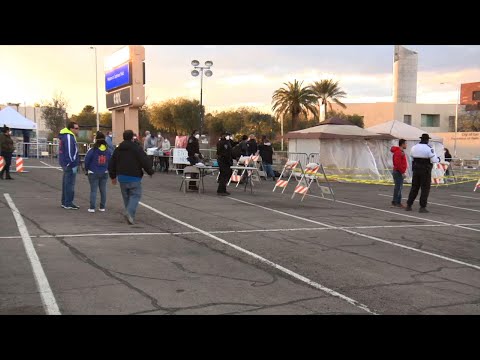 One model cited by Cuomo projected 16,000 deaths in New York once the outbreak runs its course in the coming months. Though the governor stressed it’s unclear how the pandemic will end.

“Nobody knows what’s going to happen. And I understand the need for closure, the need for control,” he said. “We’re at a place we’ve never been before.”

Upset that people were still packing into New York City playgrounds despite social-distancing rules, Cuomo said he is working with city officials to have them closed. Green spaces would be kept open.

“So use the open space in a park. Walk around, get some sun, great,” Cuomo said. “No density. No basketball games. No close contact. No violation of social distancing, period.”

City police have been patrolling the city’s parks, playgrounds and other public spaces, cautioning people to stay six feet apart and breaking up groups violating the rules. Police have even sent marked patrol cars through big city parks blaring recorded reminders about the importance of social distancing.

Mayor Bill de Blasio has said the rules were being followed at most playgrounds, but had closed a handful where violations were rampant. The mayor said Wednesday he respects that Cuomo is approaching the issue with “an abundance of caution” and will work with him.

A medical advisory council is telling paramedics in New York City they shouldn’t take fatal heart victims to hospitals to have them pronounced dead.

The temporary protocol issued this week by the Regional Emergency Medical Service is meant to ease the burden on city hospitals, some of which have begun transferring patients more than 100 miles (160 kilometers) north to the Albany area.

Data released by the city shows that the disease is having a disproportionate effect in certain neighborhoods, mainly in Brooklyn and Queens.

“I’m terrified to go outside and also to walk along this strip, because everyone that’s headed to the hospital, which we can see from here, is going through here,” said Nicholas Corsini, near Elmhurst Hospital.

An emergency field hospital with 68 beds opened Wednesday in Central Park near The Mount Sinai Hospital. A temporary hospital in the Jacob K. Javits Convention Center and a Navy hospital ship docked off Manhattan were also taking patients.

The virus, which causes the disease COVID-19, has spread rapidly across the globe. It causes mild symptoms in many of those infected, but it can cause severe symptoms or death for some, including older adults and those with underlying medical conditions such as respiratory ailments.

New York City is enlisting its recently retired police commissioner as a coronavirus supply czar, making sure hospitals on the front lines of the fight have sufficient supplies and equipment.

James O’Neill, who left the NYPD in November, is taking the role on a voluntary basis and will remain a senior vice president and global security chief at credit card giant Visa Inc.

O’Neill was with the police department for 36 years, the last three as commissioner.

At least 82,000 people have volunteered f or New York’s reserve force of medical workers — a group that includes recent retirees returning to work, health care professionals who can take a break from their regular jobs and people between gigs, according to health officials.