In migrant caravan, safety in numbers and no smuggling fees

ARRIAGA, Mexico (AP) — Kenia Yoselin Gutierrez had long thought about migrating from her native Honduras to the United States, but stories of others who made the trip scared her off: migrants being raped or disappearing, children stolen.

When she heard about the caravan that has now grown into several thousand people traveling through southern Mexico, she saw her chance. Her 5-year-old daughter, sister and niece joined her.

“It’s not so easy to walk this road alone and with children,” the 23-year-old said, sitting with her sister and their daughters under a tarp near the main square in the southern Mexican town of Pijijiapan. “But while we are accompanied like this, it’s not so dangerous.”

The tropical sun may be hot, the road long and Mexican authorities unhelpful and even harassing, but many in the caravan say traveling in a large group helps safeguard them from the dangers that plague the trail northward.

It’s also a relatively inexpensive way to make the trip, as intensified U.S. efforts to seal the border have driven the price smugglers charge as high as $12,000 — a sum those fleeing poverty and violence can ill afford.

At the same time, kidnapping and extorting money from migrants has become big business for Mexican criminal organizations, especially near the U.S. border, making it more difficult for people to attempt crossings on their own. 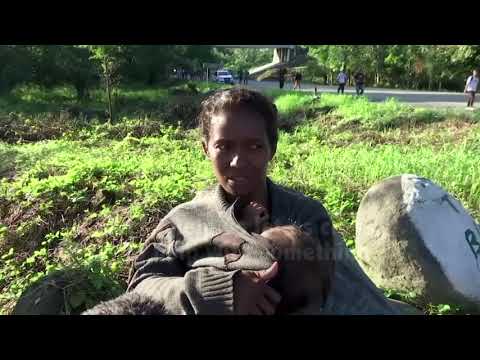 The result has been caravans like this one and the camaraderie that comes amid thousands of strangers who all share a common history and goal.

“We are from the same country,” said Harlin Sandoval, who was waiting with several hundred others on the highway outside Pijijiapan, hoping to hitch a ride from passing trucks. “And I feel more protected.”

On Friday, the caravan made its most ambitious single-day trek since the migrants crossed into the southern Mexican state of Chiapas a week ago, a 60-mile (100-kilometer) hike up the coast from Pijijiapan to the town of Arriaga.

The group has thinned considerably from exhaustion and illness, and was about 4,000-strong compared with its peak of more than 7,000. Still 1,000 miles from the nearest U.S. border crossing at McAllen, Texas, the journey could be twice as long if the group heads for the Tijuana-San Diego frontier, as another caravan did earlier this year. Only about 200 in that group made it to the border.

While such migrant caravans have taken place regularly over the years, passing largely unnoticed, they have received widespread attention this year after fierce opposition from U.S. President Donald Trump.

On Friday, the Pentagon approved a request for additional troops at the southern border, likely to total several hundred, to help the U.S. Border Patrol as Trump seeks to transform fears about immigration and the caravan into electoral gains in the Nov. 6 midterms.

Defense Secretary Jim Mattis signed off on the request for help from the Department of Homeland Security and authorized the military staff to work out details such as the size, composition and estimated cost of the deployments, according to a U.S. official who spoke on condition of anonymity to discuss planning that has not yet been publicly announced.

Stoking fears about the caravan and illegal immigration to rally his Republican base, the president has insinuated that gang members and “Middle Easterners” are mixed in the group, though he later acknowledged there was no proof of that.

On Friday, President Enrique Pena Nieto announced the launch of what he called the “You are at home” plan, offering shelter, medical attention, schooling and jobs to Central Americans in the southern states of Chiapas and Oaxaca if they apply for refuge. Pena Nieto said the plan “is only for those who fulfill Mexican laws” and is a first step toward permanent refuge status.

In the evening, in Arriaga’s central plaza after the walking was done, the migrants rejected the proposal in a show of hands and boisterous voice vote. “Gracias!” they yelled, but then “No, we’re heading north!”

A coordinator of the caravan said they would strike out again before dawn for Tapanatepec, about 29 miles (46 kilometers) away across the Oaxaca state line.

Even before the announcement, authorities said more than 1,700 of the migrants had applied for refugee status, while hundreds of others had accepted bus rides home.

Mexico’s government has allowed the migrants to make their way on foot, but has not provided them with food, shelter or bathrooms, reserving any aid for those who turn themselves in.

Police have also been ejecting paid migrant passengers off buses, enforcing an obscure road insurance regulation to make it tougher for them to travel that way.

Authorities were also cracking down on smaller groups trying to catch up with the main caravan, detaining about 300 Hondurans and Guatemalans as they walked along a highway after crossing the Mexico border illegally, said an official with the national immigration authority.

Migrants, who enter Mexico illegally every day, usually ride in smugglers’ trucks or buses, or walk at night to avoid detection. The fact that this group was walking in broad daylight suggests they were adopting the tactics of the caravan, which is large enough to be out in the open without fear of mass detentions.

However, it now appears such smaller groups will be picked off by immigration authorities, keeping them from swelling the caravan’s ranks.

For Jenifer Ramirez, traveling with her 5-month-old daughter in her arms as her husband and two other children, 3 and 5, trudged alongside them, the caravan was a stroke of good fortune.

Forced to leave Honduras in a hurry after her husband, a bus driver, was warned by gang members he would be killed if he didn’t agree to transport drugs on his vehicle, the family had no money to pay a smuggler.

“In a group we receive help,” said Ramirez, 24, referring to the food and donations provided by local communities at every stop along the way. “If you don’t have money you get food, clothing ... to be able to continue.”

Gutierrez, the young woman traveling with her daughter, sister and niece, said she had never before slept in a park or on a sidewalk. She hopes that all the hardship may someday become “a pretty memory” for herself and her daughter, if they make it to the U.S.

“I would like her to remember that I am doing this to give her a better life, to give good schooling, to give her what I never had in my childhood,” Gutierrez said. “And may she never end up like me, having to emigrate far away.”

This story corrects town to Tapanatepec.