CHICAGO (AP) — Chicago Police Superintendent Eddie Johnson took it personally when detectives determined that “Empire” actor Jussie Smollett allegedly lied about being the victim of a racist and homophobic attack .

Speaking Thursday at a news conference, Johnson said he was angry and offended that another black man would exploit racial divisions for his own gain — and smear the reputation of a city Johnson has worked his entire career to protect.

“I know the racial divide that exists here. I know how hard it’s been for our city and our nation to come together. And I also know the disparities and I know the history,” Johnson said. ”‘Empire’ actor Jussie Smollett took advantage of the pain and anger of racism to promote his career.”

Johnson, a lifelong Chicagoan, grew up in some of the city’s toughest and most segregated neighborhoods. He lived in Chicago’s notorious Cabrini-Green housing project until he was 9, and then in the South Side neighborhood of Washington Heights.

After nearly 30 years as a police officer, Johnson was asked to lead the department in 2016 after former Superintendent Garry McCarthy was fired following the release of dashcam footage showing a white police officer fatally shooting an unarmed black teenager 16 times. Mayor Rahm Emanuel hoped to repair the trust between the police and residents, and Johnson promised to do his best. 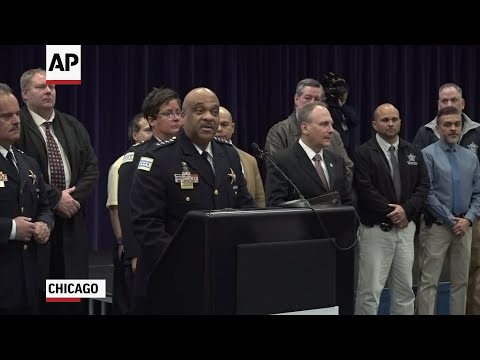 His son, who gave Johnson a kidney in 2017 after the superintendent battled a potentially life-threatening condition, recently joined the police force.

Smollett’s claims thrust the city back into an international spotlight it didn’t want.

Smollett, who is black and gay, told police he was physically attacked by two men who shouted homophobic and racial slurs at him before beating him up and throwing some kind of chemical on him the early morning of Jan. 29. He also said his attackers shouted, “This is MAGA country,” an apparent reference to President Donald Trump’s campaign slogan, “Make America Great Again,” and looped a rope around his neck.

But his story fell apart when brothers Abimbola Osundairo and Olabinjo Osundairo — bodybuilders and aspiring actors who Smollett knew from the “Empire” set and the gym — told police that Smollett paid them $3,500 to stage the attack because he was unhappy about his salary and wanted to promote his career.

Smollett was arrested Thursday morning and appeared in court later that day. A judge set his bond at $100,000.

“Why would anyone, especially an African-American man, use the symbolism of a noose to make false accusations?” Johnson said. “How could someone look at the hatred and suffering associated with that symbol and see an opportunity to manipulate that symbol to further his own public profile? How can an individual who’s been embraced by the city of Chicago turn around and slap everyone in this city in the face by making these false claims?”

Johnson has led the police department as violence in some neighborhoods spiked. He recently pointed to double-digit decreases in gun violence over the past two years as proof of progress. On Thursday, he began his remarks by saying that the families of gun violence deserved more attention than Smollett.

He also noted that the city hosts one of the world’s largest gay pride parades every year, and said police take all hate crimes seriously.

“I love the city of Chicago and the Chicago Police Department, warts and all,” Johnson said. “But this publicity stunt was a scar that Chicago didn’t earn and certainly didn’t deserve.”

Check out the AP’s complete coverage  of the Jussie Smollett case.