SACRAMENTO, Calif. (AP) — With hundreds of thousands of Californians again in the dark amid high wildfire danger Thursday, Democratic Gov. Gavin Newsom had a message: “I own this.”

Newsom again blasted California’s utilities — most notably Pacific Gas & Electric — for failures to modernize electrical systems. He said shutting off power shouldn’t have to be the alternative in a state that is the most technologically advanced.

But he also personalized the crisis.

“It’s on me to make sure this doesn’t happen again,” he said at a Los Angeles news conference as a wildfire raged in Northern California’s wine country . Hours later, two wildfires were burning in Los Angeles County, where temperatures soared into the 90s and extreme winds were forecast through Friday.

Newsom’s pronouncement was either perilous or savvy for a first-year governor who many see as a future presidential candidate.

Former Democratic Gov. Gray Davis was recalled in 2003 largely because of his handling of rolling blackouts that struck the state following deregulation of the energy sector and market manipulation by Enron and other companies.

If Newsom fails to hold the state’s unpopular investor-owned utilities accountable and stabilize power delivery, he will pay a price. If successful, he may reap tremendous political benefits. 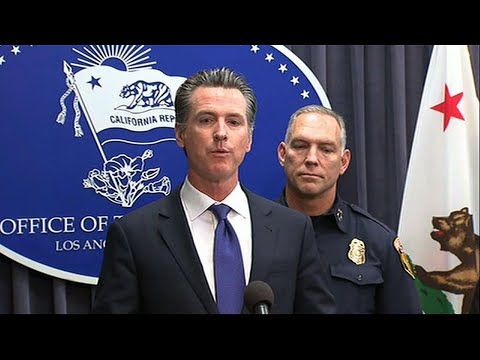 If things fall somewhere in between, voters may appreciate Newsom for not running from the issue, said Sherry Bebitch Jeffe, a political scientist at the University of Southern California.

“There’s a risk involved in either but I think probably that the risk is more harmful if he didn’t go out and take control of the responsibility for the solving this problem,” she said.

The shutoffs are an effort to prevent downed power lines or other damage to equipment from sparking wildfires. PG&E is under immense pressure after investigators found its equipment started the deadliest wildfire in state history last year, which killed 85 people and nearly destroyed the town of Paradise. The utility filed for bankruptcy in January, just weeks after Newsom took office.

He quickly made wildfire prevention a priority, visiting the Sierra Nevada foothills to tout planned investments in fire detection technology and firefighting equipment. His budget included $75 million to help counties with blackouts, and he redirected National Guard troops from work on the border with Mexico to assist with fire prevention efforts.

He also appointed a new head of the California Public Utilities Commission, the state’s regulatory agency that has for years been criticized for lax regulation of the energy sector.

But in early October, the biggest planned blackout in state history occurred, with PG&E shutting off power for roughly 2 million people in their Northern California coverage area, angering and frustrating customers.

Some Republicans were quick to point fingers at Newsom, who even while taking ownership of the latest power outages continued touting the state’s economic successes, including record low unemployment, and bashing the power companies.

That utilities “can’t keep the damn lights on” is “fundamentally unacceptable and people should be outraged by that,” he said.

Facing blackouts in 2001, California voters directed their outrage at Davis. He still won re-election in 2002 but anger grew and so did a state budget deficit and he was recalled the following year and replaced by Arnold Schwarzenegger, a Republican.

The situations are “apples and oranges,” Davis said, but he praised Newsom for taking charge.

“It’s clearly the right thing to do,” Davis said, adding he’s been informally in touch with Newsom on the state’s wildfire issues. “I give him a lot of credit for taking ownership of a challenging issue.”

Larry Gerston, a professor emeritus of political science at San Jose State University, said the scenarios faced by Newsom and Davis were different, and so were their reactions. Davis tried to place blame for the troubles elsewhere, he said.

“Newsom’s owning it, and Gray Davis was giving it away,” he said.

A big question for Newsom, Gerston said, is whether he’ll move for a public takeover of PG&E. He hasn’t done that but has indicated the country’s largest utility may need to be broken up. He also has urged the utility to compensate customers for the blackouts with credits or rebates of $100 to $250.

PG&E has said they do not reimburse for losses from power outages, but Newsom said Thursday the state’s utility regulator is assessing costs and may have authority to force PG&E to do more.

He then reminded voters that the buck stops with him.

“No one cares who’s to blame, they want to know what the hell we’re going to do,” he said. “And you know the person that’s accountable for doing that? The person that took the oath of office nine months ago.”