ATLANTA (AP) — Atlanta’s new archbishop was installed Wednesday in a Mass that tweaked Catholic traditions with social distancing among priests and video messages from church leaders who could not attend during the coronavirus pandemic.

The Mass began with Archbishop Gregory J. Hartmayer knocking three times on the large wooden doors of Christ the King Cathedral in Atlanta. He was welcomed inside by priests who kept their distance as they walked toward the altar to begin the service.

Only a handful of people attended in person, with some of them seated strategically across the main nave while others watched from the choir loft. They applauded rather than hugged as Hartmayer became the new leader of the diocese.

Typically, the cathedral would be packed for such an occasion, but the ceremony was livestreamed for the faithful to follow.

“One of the challenges was just keeping the tradition but figuring out how to do that without having all the people there who are typically there,” said Maureen Smith, a spokeswoman for the Archdiocese of Atlanta.

Guests would typically include Pope Francis’ representative, the papal nuncio who presents the new archbishop with the papal bull, a document inscribed in Latin appointing him to his post.

Rather than traveling to Atlanta, the nuncio appeared by video toward the beginning of Wednesday’s service. 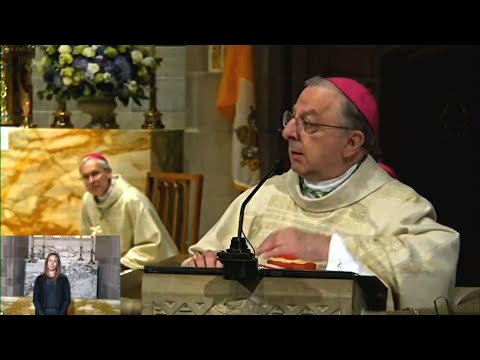 “I regret that during these extraordinary times, I cannot join you in person,” the Most Rev. Christophe Pierre, Apostolic Nuncio to the United States, said in a video message played during the Mass.

“You are being installed with few people physically present but with many, many joining from afar not only here in Atlanta but also from your beloved Savannah and from all over the country,” Pierre said.

In an interview before the Mass, Deacon Dennis Dorner noted that in normal times, the cathedral would be filled with 200 priests or more, all of whom would go to the altar to greet the new archbishop.

But in the midst of the coronavirus outbreak, “that’s just not going to happen,” he said.

Hartmeyer had served as bishop of the diocese in Savannah, Georgia, since 2011. Pope Francis appointed him in March to head the Atlanta diocese.

As a Conventual Franciscan, Hartmayer, 68, pledged to serve his vows of chastity, poverty and obedience in service to society. The Buffalo, New York, native worked as a guidance counselor, school director and teacher in Catholic schools in Baltimore, New York and Florida.

He replaces Archbishop Wilton Gregory, who took over in Washington, D.C., amid leadership changes in response to the global church’s sex abuse and cover-up scandals.

“My heart is in Atlanta today while I rejoice with you as you welcome Archbishop Gregory Hartmeyer as your new shepherd,” Gregory said from Washington, in another video played during the Mass. “I know that he will be for you a gentle and dedicated minister of the gospel.”

Hartmayer has held video calls with some of the priests and others he will be working with, and he’s been able to have some one-on-one, personal meetings.

“Fortunately he has a large conference room with a very long table, and they can separate from one another,” Dorner said.