WASHINGTON (AP) — In a surprise move, the Federal Reserve cut its benchmark interest rate by a sizable half-percentage point Tuesday in an effort to support the economy in the face of the spreading coronavirus.

Chairman Jerome Powell said at a news conference that the virus “will surely weigh on economic activity both here and abroad for some time.”

It was the Fed’s first move since last year, when it reduced its key short-term rate three times. It’s also the first time it’s cut rates between policy meetings since the 2008 financial crisis, and it is the largest rate cut since then.

The Dow Jones Industrial Average, which had been down as much as 356 points shortly before the Fed’s announcement, initially jumped on the news. The surge was short-lived. By late afternoon, the Dow had tumbled more than 600 points in a sign of nagging worries about economic damage from the virus. Still, on Monday, the Dow had rocketed up nearly 1,300 points — its largest percentage gain since 2009.

The yield on the 10-year Treasury note briefly fell below 1% for the first time ever. Investors around the world bid up bond prices — which move in the opposite direction of yields — as they sought safety from the stock market’s turmoil.

The fear that coursed through financial markets after the Fed’s announcement underscored the worry that there are limitations to what the Fed and other central banks can do to resolve a crisis of this kind. Powell acknowledged as much when he observed that the “ultimate solution to this challenge will come from others, most notably health professionals.”

Indeed, the Fed’s announcement of a steep rate cut signaled its concern that the coronavirus, which is depressing economic activity across the world, poses an escalating threat and could trigger a recession. Rising uncertainty about how and when the threat will be resolved is pressuring markets. Powell said that since last week, when several Fed officials had said they saw no urgent need to cut rates, “we have seen a broader spread of the virus.”

More on the virus outbreak

At the same time, Powell sought to balance those concerns by noting that U.S. economy remained sturdy, with unemployment low and consumer spending solid.

“The economy continues to perform well,” he said. “We will get to the other side of this.”

The Fed’s statement announcing its rate cut said it would “act as appropriate to support the economy,” which economists saw as a sign it’s leaning toward an additional rate cut, perhaps at its next policy meeting in two weeks. Emergency cuts like Tuesday’s have typically been followed by further reductions soon afterward. Tuesday’s move, which the Fed’s policy committee backed unanimously, lowered its benchmark rate to a range of 1% to 1.25%.

On Tuesday, Australia’s central bank announced that it was cutting its official rate by a quarter-point to a record low of 0.5% and cited the coronavirus’ “significant effect” on the economy as the reason. Just as in Australia, central banks in Japan and Europe have almost no more room to provide stimulus through rate cuts because their benchmark rates are at or near zero — or even below.

The result is that pressure is rising on governments across the world to supply economic help through tax or spending policies.

China has taken action on several fronts to ease credit and stabilize the world’s second-largest economy in the face of the coronavirus.

Members of the U.S. Congress are finalizing a $7.5 billion emergency bill to fund the government’s response to the coronavirus outbreak in a rare act of bipartisan cooperation. The legislation would speed development of a coronavirus vaccine, pay for preparedness by states and localities, help other countries fight the outbreak and seek to ensure that the vaccine is affordable when it’s ready, though that could take a year.

Powell acknowledged that there are limits to the Fed’s influence to deal with the economic repercussions of the virus — from closed factories to canceled business travel to disrupted company supply chains. But he said lower rates can help keep credit flowing, particularly to struggling businesses already laden with debt that would otherwise face higher borrowing costs. And he suggested that the Fed’s intervention would boost consumer and business confidence and provide “a meaningful boost to the economy.”

Many economists do see some benefit from the Fed’s move.

“The Fed obviously cannot address the virus itself by cutting rates, but they can hope to short-circuit the potential for a negative response in financial markets that could make the economic impact of the virus even worse,” said Eric Winograd, senior economist at AB.

Across the world, business is slowing and in some places stopping altogether as a consequence of the virus. Factories in China have been struggling to grind slowly back to life. Many European vacation destinations have been all but deserted as leisure and corporate travel has diminished. And major companies around the world bracing for the risk that the economic landscape could worsen before it improves.

Indeed, Powell noted that “you are hearing concerns from people in the travel business, the hotel business and things like that.”

“We expect that will continue and probably will grow,” he said.

Google told its 8,000 full-time staffers and contractors at its European headquarters in Dublin to work from home Tuesday. Irish news reports have said that a Google staffer is being tested for coronavirus. But the company issued only a brief statement that said it was continuing to take precautionary measures to protect the health and safety of its workforce.

President Donald Trump, who has repeatedly attacked the Fed and Powell in particular for not cutting rates more aggressively, doubled down in a new tweet after the Fed’s announcement, saying, “More easing and cutting!”

Powell said the central bank is focused on its goal of supporting the economy and said, “We’re never going to consider any political considerations whatsoever.”

Earlier Tuesday, seven major economies had pledged to use “all appropriate tools” to deal with the spreading coronavirus but announced no immediate actions. 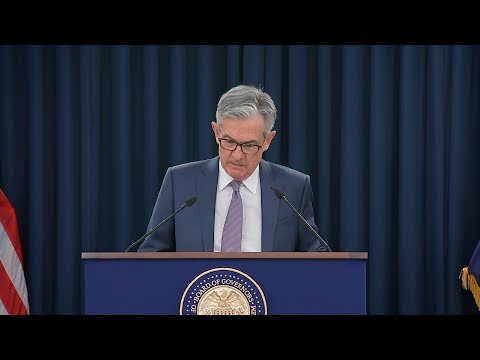 The group of major industrial countries, referred to as the G-7, said it was “ready to take actions, including fiscal measures where appropriate, to aid in the response to the virus and support the economy.” The joint statement from the United States, Japan, Germany, Britain, France, Italy and Canada followed an emergency conference call among the finance ministers and central bank presidents, led by Powell and U.S. Treasury Secretary Steven Mnuchin.

The G-7 has issued similar joint statements during periods of extreme market turmoil, such as the Sept. 11, 2001, terrorist attacks and the 2008 financial crisis.

Last week, the Dow plunged 14% from recent highs, its worst week since the 2008 global financial crisis.

Global agencies have indicated this week that there will be a significant economic impact as the virus spreads.

On Monday, the Organization for Economic Cooperation and Development said that the coronavirus, which was first detected in China but has now spread to 60 nations in Europe, the U.S., Latin America and other parts of Asia, could cause the world economy to shrink this quarter for the first time since the international financial crisis more than a decade ago.

The OECD lowered its forecasts for global growth in 2020 by half a percentage point, to 2.4% — and said the figure could go as low as 1.5% if the outbreak is sustained and widespread. There are signs that the outbreak has begun to ebb in China.