Trial starts in case of fatal shooting over parking spot

CLEARWATER, Fla. (AP) — A prosecutor told jurors Wednesday that a white Florida man who fatally shot an unarmed black man during a dispute over a parking space had initiated a similar confrontation just months before, while his defense attorney said the shooting was in self-defense.

Prosecutor Fred Schaub said during opening statements of Michael Drejka’s manslaughter trial in Clearwater that five months before he fatally shot Markeis McGlockton in July 2018, the defendant had threatened another driver about parking in a handicapped parking spot at the same convenience store. That encounter, while heated, didn’t result in a physical altercation.

Five months later, Drejka confronted McGlockton’s girlfriend for parking in a handicapped space. Convenience store video recorded McGlockton leaving the store and shoving Drejka to the ground. Seconds later, Drejka pulled out a handgun and shot the 28-year-old McGlockton as he backed away. McGlockton ran inside the store, where he collapsed and died.

“He took the life of another human being unlawfully without any legal justification and that’s what we’re going to prove to you during the course of this trial,” Schaub said.

Defense attorney Bryant Camareno called the death of McGlockton, a father of three children, unfortunate. But the shooting was excusable because Drejka felt threatened by McGlockton’s size and the shove took him by surprise, the defense attorney said. 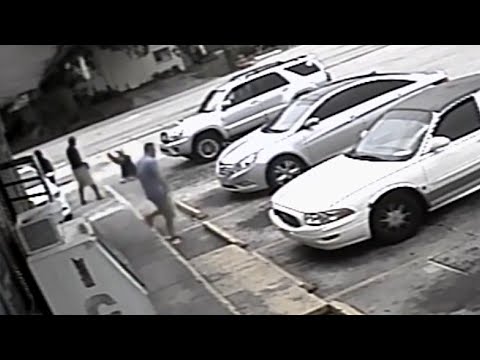 “Shock, confusion ... there was confusion on the part of Mr. Drejka. He had no idea what happened to him,” Camareno said. “The danger may not have been actual. In his state of mind, it’s the appearance of danger that caused him to act.”

McGlockton’s girlfriend, Brittany Jacobs, testified that the family had stopped by the store for snacks and pulled into a handicapped spot. The car was still running as Jacobs and two children waited for McGlocton and his older son to return from the store.

She said Drejka started walking around her car, stopped in the front, and then started pointing and yelling at her for parking in a handicapped spot. She said she eventually cracked the window to hear what he was saying and a screaming match ensued.

Another customer, Robert Castelli, testified that he heard the back-and-forth argument between Drejka and Jacobs, and that the screaming had intensified as he entered the store. Castelli said he was concerned for the woman’s safety. “I told the clerk there’s an altercation outside. You might want to get involved.”

Jacobs and Castelli testified that McGlockton was backing up after shoving Drejka. Both said McGlockton didn’t take a step forward, toward Drejka as he was on the ground after being shoved.

McGlockton’s autopsy showed he had the drug ecstasy in his system, and the defense attorney suggested that could have led him to act impulsively.

Both the prosecutor and defense attorney promised jurors they would watch the surveillance video many times during the trial, and Camareno played it for them twice during opening statements.

The first witness prosecutors called was the man Drejka had confronted about parking in a handicapped spot at the same convenience store in February 2018. Richard Kelly, who works at a septic company, testified that Drejka threatened him, but he didn’t brandish any weapon. Drejka told him a relative is handicapped. The argument de-escalated when the convenience store owner came outside and Kelly left.

It’s a personal issue for Mr. Drejka when someone parks in a handicap spot if they’re not handicapped, Camareno told jurors.

Drejka’s trial is expected to last two to three weeks.