AP FACT CHECK: O’Rourke on climate, Trump on ‘no collusion’

WASHINGTON (AP) — Beto O’Rourke opened his Democratic presidential campaign this past week with a call to action on global warming that misrepresented the science. From Iowa, he claimed scientists are united in believing the planet only has a dozen years to turn the tide on climate change, which is not quite their view.

In Washington, an exasperated federal judge fact-checked the “no collusion mantra” recited by President Donald Trump and his associates as they try to dispel suspicions that people from his 2016 campaign and Russia worked together to tilt that election. Judge Amy Berman Jackson, while sentencing former campaign chairman Paul Manafort, reminded her courtroom — and indirectly the president — that Manafort’s trial was unrelated to questions of collusion with Russia.

“Court is one of those places where facts still matter,” Jackson said. “The ‘no collusion’ mantra is simply a non sequitur.”

That didn’t stop the refrain. “Again that was proven today, no collusion,” Trump tweeted.

A look at some of the political rhetoric of the past week:

O’ROURKE, on global warming: “This is our final chance. The scientists are absolutely unanimous on this. That we have no more than 12 years to take incredibly bold action on this crisis.” — remarks in Keokuk, Iowa, on Thursday. 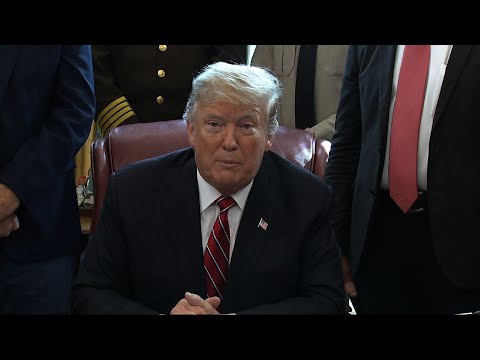 THE FACTS: There is no scientific consensus, much less unanimity, that the planet only has 12 years to fix the problem.

A report by the United Nations Intergovernmental Panel on Climate Change, drawn from the work of hundreds of scientists, uses 2030 as a prominent benchmark because signatories to the Paris agreement have pledged emission cuts by then. But it’s not a last chance, hard deadline for action, as it has been interpreted in some quarters.

“Glad to clear this up,” James Skea, co-chairman of the report and professor of sustainable energy at Imperial College London, told The Associated Press. The panel “did not say we have 12 years left to save the world.”

He added: “The hotter it gets, the worse it gets, but there is no cliff edge.”

“This has been a persistent source of confusion,” agreed Kristie L. Ebi, director of the Center for Health and the Global Environment at the University of Washington in Seattle. “The report never said we only have 12 years left.”

The report forecasts that global warming is likely to increase by 0.5 degrees Celsius or 0.9 degrees Fahrenheit between 2030 and 2052 “if it continues to increase at the current rate.” The climate has already warmed by 1 degree C or 1.8 degrees F since the pre-Industrial Age.

Even holding warming to that level brings harmful effects to the environment, the report said, but the impact increases greatly if the increase in the global average temperature approaches 2 degrees C or 3.6 degrees F.

“The earth does not reach a cliff at 2030 or 2052,” Ebi told AP. But “keep adding greenhouse gases to the atmosphere and temperatures will continue to rise.”

As much as climate scientists see the necessity for broad and immediate action to address global warming, they do not agree on an imminent point of no return.

Cornell University climate scientist Natalie M. Mahowald told the AP that a 12-year time frame is a “robust number for trying to cut emissions” and to keep the increase in warming under current levels.

But she said sketching out unduly dire consequences is not “helpful to solving the problem.”

TRUMP, on Manafort’s sentencing to a second federal prison term: “I can only tell you one thing: Again that was proven today, no collusion.” — remarks Wednesday to reporters at the White House.

THE FACTS: There was no such proof in that trial or in Manafort’s other trial. Whether collusion happened was not a subject of the charges against Manafort. It’s one of the central issues in a separate and continuing investigation by special counsel Robert Mueller.

In the case that produced Manafort’s first prison sentence, he was convicted of tax and bank fraud related to his work advising Ukrainian politicians. Judge T.S. Ellis III neither cleared nor implicated the president, instead emphasizing that Manafort was “not before this court for anything having to do with collusion with the Russian government.”

Trump ignored that point afterward, tweeting: “Both the Judge and the lawyer in the Paul Manafort case stated loudly and for the world to hear that there was NO COLLUSION with Russia.” Trump misquoted the lawyer as well as the judge.

On Wednesday, Jackson sentenced Manafort for misleading the government about his foreign lobbying work and for encouraging witnesses to lie on his behalf. Again, the case did not turn on his leadership of Trump’s campaign. “The investigation is still ongoing,” she noted, scolding Manafort’s lawyers for bringing up the “no collusion” refrain during the trial.

As with other Americans who were close to Trump and have been charged in the Mueller probe, Manafort hasn’t been accused of involvement in Russian election interference. Nor has he been cleared of that suspicion. The same is true of Trump.

TRUMP: “Since 1976, presidents have declared 59 national emergencies. ... The only emergency Congress voted to revoke was the one to protect our own country. So, think of that: With all of the national emergencies, this was the one they don’t want to do. And this is the one, perhaps, they should most do.” — Oval Office remarks Friday after vetoing the congressional resolution seeking to strike down his declaration of a border emergency.

THE FACTS: His declaration was not the only one designed to protect the country.

President Barack Obama declared an emergency in 2009 to protect the nation from the swine flu, which had killed more than 1,000 people and spread to 46 states before he took that step. The H1N1 flu strain was linked to more than 274,000 hospitalizations and 12,000 deaths in the U.S. between April 2009 and April 2010.

It enabled the activation of emergency plans, such as moving emergency rooms offsite to keep those infected with the virus away from other emergency room patients, and it had Republican support. Unlike Trump’s order, it was not designed to free up money that Congress had already refused to spend.

Most national emergencies declared by presidents have been narrowly drawn, designed to protect U.S. interests in foreign countries, often in response to crises breaking abroad.

THE FACTS: One major record has been broken — the number of migrant families arrested for crossing into the U.S. illegally. Other records have not.

More than 76,000 migrants crossed the U.S.-Mexico border last month, more than double the number from the same period last year. Most were families coming in increasingly large groups.

Overall numbers of Border Patrol arrests were the highest in 12 years, but not the highest ever.

The annual numbers are far from a record. About 400,000 people were arrested for crossing the border illegally in the last budget year, just one-quarter of the 1.6 million in 2000. That is the record.

TRUMP: “The Fake News photoshopped pictures of Melania, then propelled conspiracy theories that it’s actually not her by my side in Alabama and other places. They are only getting more deranged with time!” — tweet Wednesday.

THE FACTS: No, there’s no evidence that the news organizations Trump likes to call the “Fake News” doctored pictures of Melania Trump to peddle the falsehood that a stand-in took the first lady’s place in Alabama last week or other places at other times. Some wrote about the fakery, spread by a mix of satirical, gullible and anti-Trump people online, and Trump’s tweet gives them more visibility than they would have had otherwise.

Among them, The Guardian columnist Marina Hyde tweeted in October 2017 that she was “absolutely convinced Melania is being played by a Melania impersonator these days.” She followed up with an admission that she had indulged in a “parallel fake universe” in which she fantasized that the first lady had escaped to small-town Missouri and was volunteering at a shelter for refugees.

TRANSPORTATION SECRETARY ELAINE CHAO, on positive train control: “Nothing happened on this until we came into office. And I would like some credit for that.” — remarks Monday to reporters.

THE FACTS: Her comment that nothing was done on positive train control before she took control of the Transportation Department is not true.

The Federal Railroad Administration took an aggressive posture on the braking technology under the Obama administration. After an Amtrak train derailed in Philadelphia in 2015, the agency’s administrator, Sarah Feinberg, pushed railroads to move faster on installing positive train control, which has been available for years. The GPS-based technology is designed to automatically slow or stop trains that are going too fast and can take over control of a train when an engineer is distracted or incapacitated.

Congress had mandated that railroad companies install the braking technology by 2015, after a 2008 Metrolink crash in California killed 25 people. But the rail industry persuaded Congress to push back the installation deadline to 2018, while allowing railroads to apply for an extension until 2020 in some circumstances.

Feinberg said she wouldn’t accept further delays and had her agency post quarterly updates about each railroad’s progress on her agency’s website.

She warned railroads that any extensions beyond the 2018 deadline would only be considered if the railroads could prove they made a good-faith effort to meet the mandate. She also told railroads to submit plans that spelled out their detailed schedules for the braking systems and warned that the agency could fine them up to $5,000 per day if they didn’t file the required plans.

In contrast, Chao was noncommittal on the deadline at her confirmation hearing, saying she needed to be briefed on the technology.

The miles completed under the Trump administration built on the foundation that had been set out under Obama.

THE FACTS: Nothing in Page’s testimony to the House Judiciary Committee last year indicates that former FBI Director James Comey lied about his investigative team’s decision not to recommend charges against 2016 Democratic presidential nominee Clinton in her handling of an email server while secretary of state. A transcript of Page’s testimony was released by the panel’s top Republican this past week.

Trump is correct that Comey did testify to the House Oversight and Government Reform Committee in July 2016 that the decision on no charges was unanimous among his investigative team.

In the newly released transcript, Page said the investigative team determined it did not have “sufficient evidence” against Clinton to bring a charge of “gross negligence” in her handling of emails.

Page did note there was some “smack talk” by higher-level FBI officials expressing a desire to “get” Clinton. “So I am aware of senior FBI officials talking to subordinate FBI officials on the Hillary Clinton investigative team who unquestionably had anti-Hillary sentiment, but who also said: You have to get her or — again, I don’t have an exact quote — but like we’re counting on you, you know,” Page said.

But Page also noted that none of those officials was in a position of authority over the investigation any longer.

TRUMP, on how he stood at his Scottish golf resort, Turnberry, on the eve of the Brexit referendum and predicted that the British would vote to leave the European Union: “I predicted it was going to happen and I was right and people laughed when I predicted it and they won by about two points. And I was standing out on Turnberry and we had a press conference and people were screaming. That was the day before, if you remember. I think you were there. And people were screaming and I said, ‘No, I think it’s going to happen.’ And people were surprised I made the prediction ...because President Obama made the opposite prediction. And I was right.” — remarks Thursday at White House.

THE FACTS: As when he has told this story before, Trump is mixing up his predictions and his days. A month before the vote, he did predict accurately that Britain would vote to leave the EU. The day after the 2016 vote — not the day before — he predicted from his Scottish resort that the EU would collapse because of Britain’s withdrawal. That remains to be seen.