The Latest: Trump asks China to investigate Biden and son

WASHINGTON (AP) — The Latest on President Donald Trump and the impeachment inquiry (all times local):

The president is already ensnarled in an impeachment investigation over his request for Ukraine to investigate Biden and his son Hunter.

Trump and Vice President Mike Pence say Americans have a right to know about the wrongdoing the president alleges. There is no evidence of any wrongdoing by the Bidens.

House intelligence committee chairman Adam Schiff, who has a leading role in Congress’ impeachment inquiry, says Trump’s comments show “he feels he can do anything with impunity.”

And Pence is echoing Trump’s private and public urging of Ukraine’s president to investigate former Vice President Joe Biden and Biden’s family. Earlier Thursday, Trump said China should investigate Biden. There’s been no evidence of wrongdoing by either Biden.

Pence tells reporters at an event in Arizona that he thinks “the American people have a right to know if the vice president of the United States or his family profited from his position as vice president during the last administration.” 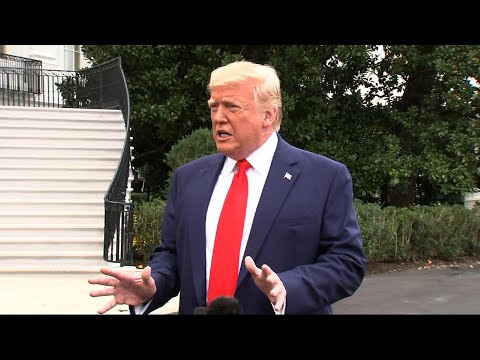 Trump’s actions have ensnarled the White House in an impeachment investigation by the Democratic-controlled House.

Trump has sought, without evidence, to implicate Biden and his son Hunter in the kind of corruption that has long plagued Ukraine. Hunter Biden served on the board of a Ukrainian gas company at the same time his father was leading the Obama administration’s diplomatic dealings with Kyiv.

Pentagon spokesman Jonathan Hoffman says he believes no one else from the Defense Department was listening on the July 25 call. Hoffman says he doesn’t know whether Esper or others got notes describing the call.

Hoffman says the Pentagon’s general counsel is asking senior department officials to turn in any documents and records related to the Ukraine issue so they can be reviewed and catalogued.

Trump tells reporters he hasn’t directly asked Chinese President Xi Jinping (shee jihn-peeng) to investigate Biden and Biden’s son Hunter, but that it’s “certainly something we could start thinking about.”

It’s Trump’s requests for Ukraine’s president to dig up dirt on Joe Biden, and as well Trump lawyer Rudy Giuliani’s conduct, that are at the center of an intelligence community whistleblower complaint that’s led to the House impeachment probe.

Trump has acknowledged his message to Ukraine’s president and other officials was to investigate Biden, who’s a 2020 Democratic presidential contender. Trump’s accusations of impropriety by Biden are unsupported by evidence.

Trump and Giuliani have also tried to raise suspicions about Hunter Biden’s business dealings in China. But there’s no evidence Joe Biden benefited financially from his son’s business relationships.