Icy blast reminds of 2014 ‘polar vortex,’ with worst to come

FARGO, N.D. (AP) — An arctic blast spread painful cold across the Midwest on Friday, closing schools, opening warming centers and even intimidating ice fishermen in a taste of the even more dangerous weather expected next week.

Forecasters called it a replay of the “polar vortex” that bludgeoned the U.S. in 2014 — and maybe even colder, with wind chills by midweek as much as 45 below in Chicago.

“We’re going to be feeling it big time,” Jeff Masters, meteorology director at the private Weather Underground, said. “It’s going to be the coldest air in five years.”

For much of middle America, the leading edge was bad enough. Cold weather advisories were in effect Friday from North Dakota to Ohio, with dangerously cold wind chills that could dip to as low as 45 below zero (negative 42 Celsius) in northern Wisconsin and Minnesota and to 35 below (negative 37 Celsius) in parts of northern Illinois and Iowa.

When the polar vortex plunges into the U.S., it will be warmer in parts of the Arctic — Greenland, northern Canada and Alaska — than in Chicago and Minneapolis, meteorologists said. 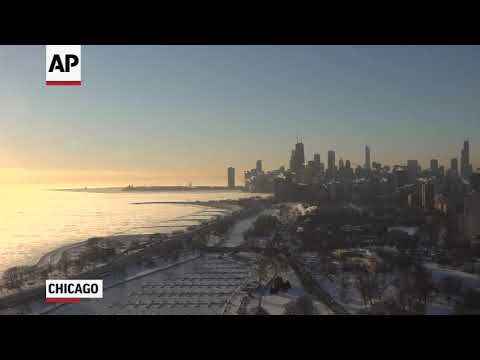 Schools in Milwaukee canceled classes Friday, when the expected high was just 2 (minus 16.7 Celsius). So did schools in western Michigan, eastern Iowa and northern Illinois. In northern Michigan, residents of islands in the river connecting Lake Superior and Lake Huron were warned to stock up on supplies in case ferry service was cut off. In Chicago, warming centers opened.

Kenny Blackwell and his son, Corey, moved from Virginia to North Dakota to help build low-income housing projects. Outside their current project on Friday, they chuckled at a cellphone showing the temperature at minus-10 and said it felt more like Alaska.

“The money here is great but the weather here is so nasty it made my dad’s hair freeze,” Corey Blackwell said. “We had to go out and buy some North Dakota clothes!”

Masters said the cold snap is due to the polar vortex, the gigantic circular upper air weather pattern in the Arctic region enveloping the North Pole, splitting into three pieces in late December because of an occasional weather condition called “sudden stratospheric warming.”

One chunk of that trapped cold air went to Siberia, another to Scandinavia, and the third piece is heading through Canada. On Wednesday, it will be over northern Michigan somewhere, he said.

The polar vortex rarely plunges as far south as the U.S., maybe every few years or more, Maue said. The last big plunge was Jan. 6, 2014, when Chicago’s temperature dipped to minus-16.

Ice fishing guide Bryan Lang acknowledged that extreme cold was part of his job in northern North Dakota, but he said he felt lucky to have taken Friday off work: the morning temperature was negative 21 degrees (negative 29 Celsius) with a wind chill of minus 42 (negative 41 Celsius).

“I’m glad to be in the house drinking coffee,” he laughed.

The deep freeze caused organizers of the Winter Carnival in Minnesota to cancel several events, including Thursday night’s parade through downtown St. Paul.

The low temperatures also forced the cancellation of events in the Fargo Frostival, a celebration of winter activities in North Dakota’s largest city. Organizer Charley Johnson joked that the Undie Run will go on Saturday as scheduled, but that long underwear was encouraged.

“We’re going to persevere no matter what with most of these events,” Johnson said. “We know they’ll be smart about it. The people will bundle up and not stay outside too long.”

For the latest developments on this story: https://bit.ly/2Wk7CzO