LAS VEGAS (AP) — The parents of a Las Vegas man who died months after winning “Jeopardy!” are creating a scholarship program in his honor.

LOS ANGELES (AP) — Katie Couric, Mayim Bialik, Aaron Rodgers and journalist Bill Whitaker are among the future guest hosts who will fill in for the late Alex Trebek on “Jeopardy!”

Packers QB Rodgers says he will guest-host on ‘Jeopardy!’

GREEN BAY, Wis. (AP) — Green Bay Packers quarterback Aaron Rodgers says he will be a guest host on “Jeopardy!” during the offseason.

The show is currently using a series of interim hosts to...

More than two months after Alex Trebek’s death, fans of “Jeopardy!” finally got the chance to say goodbye.

A video tribute to the host closed Friday’s episode of the quiz show, the final one...

NEW YORK (AP) — In a message taped for what turned out to be his final week as “Jeopardy!” host, Alex Trebek urged the game show's viewers to honor the season of giving by helping victims of the...

In a year defined by a devastating pandemic, the world lost iconic defenders of civil rights, great athletes and entertainers who helped define their genres.

LOS ANGELES (AP) — The final new “Jeopardy!” episodes hosted by Alex Trebek will air next week, with highlights that promise to be memorable.

By The Associated PressNovember 28, 2020 GMT

NEW YORK (AP) — “Jeopardy!” record-holder Ken Jennings will be the first in a series of interim hosts replacing Alex Trebek when the show resumes production next Monday.

The top 10 audiobooks on Audible.com

By The Associated PressNovember 17, 2020 GMT

2. The Math of Life and Death by Kit Yates, narrated by the author (Simon & Schuster...

Trebek brought consensus, class to a nation in need of both

LOS ANGELES (AP) — In a politically torn, culturally divided and socially splintered America, there was one thing nearly everyone could agree on: Alex Trebek was awesome.

Trebek remembered for grace that elevated him above TV host

LOS ANGELES (AP) — Alex Trebek never pretended to have all the answers, but the “Jeopardy!" host became an inspiration and solace to Americans who otherwise are at odds with each other.

LOS ANGELES (AP) — Alex Trebek, who presided over the beloved quiz show “Jeopardy!” for more than 30 years with dapper charm and a touch of schoolmaster strictness, died Sunday. He was 80....

By The Associated PressNovember 8, 2020 GMT

Notable reactions to the death of “Jeopardy!” host Alex Trebek:

“Alex wasn’t just the best ever at what he did. He was also a lovely and deeply decent man, and I’m grateful for every minute...

‘Jeopardy!’ returns with new setup and new role for Jennings

LOS ANGELES (AP) — "Jeopardy!" is returning for its 37th season, with greater social distance between Alex Trebek and the contestants, and a new role for all-time great contestant Ken Jennings....

Alex Trebek is the one providing the answers and questions in a new memoir that should reinforce...

Alex Trebek memoir to debut July 21, just before he turns 80

Simon & Schuster announced Tuesday that “The Answer Is…: Reflections on My Life”...

LOS ANGELES (AP) — Alex Trebek marked his one-year battle against pancreatic cancer with candor about how hard it’s been and a vow to keep going.

NEW YORK (AP) — Producers of the game show “Jeopardy!” have apologized for a clue that waded into political hot water involving Israeli control of the West Bank, saying an incorrect version of the...

PASADENA, Calif. (AP) — The brief farewell that Alex Trebek says will close his final “Jeopardy!” episode isn't on the horizon.

“I don't foresee that 30-second moment coming up in the near...

NEW YORK (AP) — If you judge by viewer interest in ABC's interview with Alex Trebek, the upcoming “World Series” of “Jeopardy!” is shaping up as a winner for the network.

LOS ANGELES (AP) — Alex Trebek has a message of support for Congressman John Lewis as both fight pancreatic cancer.

“We’re starting a new year, and let’s see if we can’t both complete the...

LOS ANGELES (AP) — The Super Bowl is weeks away, but for “Jeopardy!” addicts the big game is here: All-time top money winners Brad Rutter, Ken Jennings and James Holzhauer are facing off for...

Trebek says he needs 30 seconds for exit on final ‘Jeopardy’

NEW YORK (AP) — “Jeopardy!" host Alex Trebek says he's already rehearsed what he's going to say to the audience on his final show, whenever that may be.

All-time ‘Jeopardy!’ champs to vie for share of $1.5 million

LOS ANGELES (AP) — The three top money winners in “Jeopardy!” history will vie for a share of $1.5 million in January.

‘We love you, Alex!’ Contestant on ‘Jeopardy!’ moves Trebek

PROVIDENCE, R.I. (AP) — "Jeopardy!" host Alex Trebek got choked up when he read the final response from a Brown University student who wanted to show support as he battles pancreatic...

PHILADELPHIA (AP) — Allen Iverson is The Answer that finally became the question.

Take it away, Alex Trebek!

NEW YORK (AP) — "Jeopardy!" host Alex Trebek says he's had a setback in his battle with pancreatic cancer and is undergoing chemotherapy again.

Alex Trebek, saying he’s on the mend, back at ‘Jeopardy!’

The game show posted a video Thursday on Twitter...

The game show's 32-time champion lost for the first time in an episode...

LOS ANGELES (AP) — "Jeopardy!" host Alex Trebek says his doctors say he's in "near remission" of advanced pancreatic cancer and his response to the treatment is "kind of mind-boggling."

LOS ANGELES (AP) — Alex Trebek got a standing ovation as he accepted an Emmy Award as host of "Jeopardy!" — and immediately set the audience at ease, even as he alluded to his cancer...

LOS ANGELES (AP) — A professional sports gambler from Las Vegas has broken his own single-episode winnings record on "Jeopardy!"

CULVER CITY, Calif. (AP) — A 34-year-old professional sports gambler from Las Vegas won more than $110,000 on "Jeopardy!" on Tuesday, breaking the record for single-day cash winnings on the trivia...

LOS ANGELES (AP) — "Jeopardy!" host Alex Trebek said he has been diagnosed with advanced pancreatic cancer but intends to fight the disease and keep on working.

LOS ANGELES (AP) — The first-ever "Jeopardy!" team championship came down to a clash of the titans, Ken Jennings vs. Brad Rutter.

With $1 million at stake, a big Daily Double bet by Rutter... 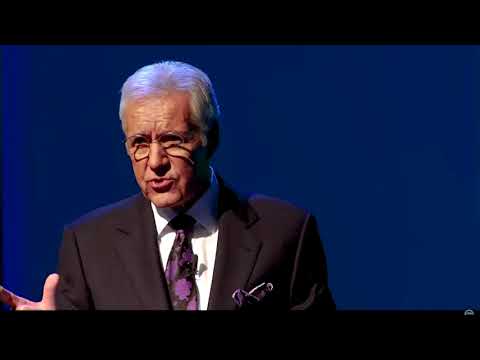 HERSHEY, Pa. (AP) — Pennsylvania's Democratic governor and his Republican challenger met in their only formal appearance together in the fall campaign, in which moderator Alex Trebek of "Jeopardy!" fame needled the candidates on their mudslinging and pressed them on their perceived exaggerations.

The event, billed by Trebek as conversational and not a debate, showed that Trebek had read up on Pennsylvania's issues and politics in drafting questions for Gov. Tom Wolf and GOP nominee Scott Wagner.

LOS ANGELES (AP) — Alex Trebek sported a beard as he launched the 35th season of "Jeopardy!" and the look has led to a poll.

The bearded host appeared in a video on Instagram under the caption, "It's time to embark upon a magical journey." He opened the first show of the season by saying, "No need to inquire how I spent my summer vacation."

HARRISBURG, Pa. (AP) — Democratic Gov. Tom Wolf is agreeing to participate in just one debate before the Nov. 6 election with his Republican rival Scott Wagner, an event to be moderated by "Jeopardy!" host Alex Trebek.

Wolf's campaign said this week that will be his only debate, and gave no explanation as to why. That prompted Wagner's campaign to accuse Wolf of being "afraid to defend himself in front of Pennsylvanians."

Celebrity birthdays for the week of July 22-28

LOS ANGELES (AP) — He played a boy who does nothing but watch TV and wears cowboy clothing in the 1971 movie "Willy Wonka and the Chocolate Factory."

Who is "Jeopardy" contestant Paris Themmen?

Themmen appeared on the game show on Tuesday. But he didn't tell Alex Trebek about his role as Mike Teevee when the host asked him about himself. Themmen said he was an "avid backpacker."

Trebek will keynote Pennsylvania Chamber of Business and Industry's annual dinner in October, which is scheduled to include the 45-minute debate.

Democratic Gov. Tom Wolf will face off in November against the winner of May's Republican primary.

‘Jeopardy’ host Trebek has surgery for blood clots on brain

Trebek appeared in a video on the "Jeopardy" Facebook page Thursday to announce that he'd had the surgery during the show's holiday break.

LOS ANGELES (AP) — A woman who competed on "Jeopardy!" while battling terminal colon cancer has died the week before her episode was set to air but prize money has gone to cancer research as she wished.