KYIV, Ukraine (AP) — The longtime leader of Belarus vowed Thursday to continue a crackdown on civil society activists he regards as “bandits and foreign agents.”

President Alexander Lukashenko chided officials in his administration for allowing the operation of non-governmental organizations that he called “harmful to the state.” 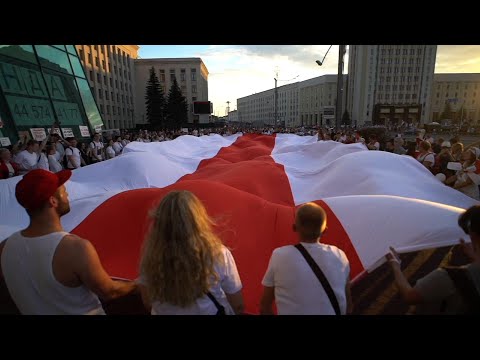 WASHINGTON (AP) — Secretary of State Antony Blinken met on Monday with Belarus’ main opposition leader as the United States steps up criticism of the government in Minsk for a widening crackdown on dissent following disputed elections last year.

KYIV, Ukraine (AP) — Authorities in Belarus raided offices of an independent newspaper and detained three of its journalists Monday as part of a relentless crackdown on media outlets and civil society activists.

KYIV, Ukraine (AP) — Authorities in Belarus raided the homes and offices of independent media outlets and civil society activists Friday, widening a crackdown on opposition in the ex-Soviet nation.

On Lithuania’s plea, Iraq to probe human smuggling to Europe

LONDON (AP) — Here’s some of what happened while the world was distracted by the coronavirus: Hungary banned the public depiction of homosexuality. China shut Hong Kong’s last pro-democracy newspaper.

KYIV, Ukraine (AP) — Authorities in Belarus raided the offices and homes of dozens of human rights activists and journalists Wednesday in a sweeping crackdown a day after the country's authoritarian president promised to “deal with” non-governmental organizations that he accuses of fomenting unrest.

VEREBIEJAI, Lithuania (AP) — Mustafa Hussein Hamad kicked a dirty ball between two old tires in the schoolyard where he spends most of his time. He and dozens of other migrants are fenced in at an old school after walking at night through the thick woods into Lithuania from neighboring Belarus.

Putin hosts leader of Belarus for talks on closer ties

MOSCOW (AP) — The authoritarian leader of Belarus visited Russia on Tuesday for talks with President Vladimir Putin as soaring tensions with the West have boosted his reliance on Moscow’s support.

Belarusian President Alexander Lukashenko thanked Putin for the “very serious support" Belarus has received from Russia and pledged that the country would duly repay its loans.

In an 84-1 vote with 58 abstentions, the 141-seat Seimas passed the amendments that include a fast-track procedure enabling the speedier deportation of migrants and slashing the processing time of asylum applications from as many as several months to 10 days.

The Russian Direct Investment Fund, or RDIF, said its deal with the Serum Institute of India, the world’s largest vaccine manufacturer by volume, envisions annual production of more than 300 million doses of the vaccine in India starting in September.

HELSINKI (AP) — The European Union’s border agency is pledging to “significantly” step up its support to Lithuania in the coming days “due to the growing migratory pressure at Lithuania’s border with Belarus” that the Baltic nation is trying to contain.

VILNIUS, Lithuania (AP) — Belarusian authorities have raided the offices of several media outlets and the homes of scores of journalists under a multi-pronged crackdown on dissent and free speech in the ex-Soviet nation, a media watchdog said Friday.

VILNIUS, Lithuania (AP) — Lithuania began Friday to erect a fence along its border with Belarus to deter third country migrants from entering, a week after Vilnius declared a state of emergency to address a sharp rise in migratory flows — which it says Belarusian authorities are encouraging.

KYIV, Ukraine (AP) — Belarusian authorities blocked the website of a leading online media outlet and detained some of its journalists and several reporters from other news organizations Thursday, the latest moves in a sweeping crackdown on dissent and independent media in the ex-Soviet nation.

US finalizes ban on Belarus travel over forced landing

WASHINGTON (AP) — The Transportation Department issued a final order Tuesday that blocks most travel between the United States and Belarus, underscoring Washington's concern about the recent forced landing of a passenger jet to arrest a dissident Belarussian journalist.

EU vows to help Lithuania amid flow of migrants from Belarus

VILNIUS, Lithuania (AP) — The European Union promised Tuesday to help bloc member Lithuania handle an influx of migrants from the Middle East and Africa, which the Baltic nation says is encouraged by authorities in neighboring Belarus as part of their standoff with the West.

KYIV, Ukraine (AP) — The highest court in Belarus convicted an aspiring rival to the nation's authoritarian president on corruption charges that he rejects as politically motivated and sentenced him Tuesday to 14 years in prison.

Lithuania declares emergency due to migration from Belarus

HELSINKI (AP) — Lithuania has declared a state of emergency due to an influx of migrants in the last few days from neighboring Belarus, as tensions between the European Union and Belarus escalate.

Lithuania's Interior Minister Agle Bilotaite said late Friday that the decision, proposed by the State Border Guard Service, was necessary not because of an increased threat to the country of 2.8 million people but to put a more robust system into place to handle migrants coming in.

BERLIN (AP) — Belarus has ordered two German educational organizations to close, part of its retaliation against EU sanctions imposed over a diversion of a passenger jet by the ex-Soviet nation's authorities in order to seize a dissident passenger.

WARSAW, Poland (AP) — An official in Poland said Wednesday that the health of a Polish minority leader being held in a Belarus prison has deteriorated and that authorities are not allowing her to leave for Poland.

US proposes to ban air travel between US and Belarus

WASHINGTON (AP) — The United States on Tuesday proposed sharp restrictions on travel between the U.S. and Belarus, the latest fallout from the forced landing of a passenger jet to arrest a dissident Belarussian journalist.

Belarus cuts cooperation on migration with EU over sanctions

The EU on Thursday slapped new bruising economic sanctions on Belarus over last month's diversion of a passenger jet to arrest a dissident journalist.

KYIV, Ukraine (AP) — The dissident Belarusian journalist and his Russian girlfriend who were arrested after being pulled off a flight that was diverted to Minsk have been transferred from jail to house arrest — a move the country’s exiled opposition leader said Friday was positive but still left them “hostages.”

KYIV, Ukraine (AP) — A closed trial for the husband of Belarus’ opposition leader began Thursday at a jail in the city of Gomel. Siarhei Tsikhanouski faces a sentence of up to 15 years on charges that include organizing mass unrest and inciting hatred.

BRUSSELS (AP) — The European Union slapped economic sanctions on Belarus on Thursday in response to what the bloc called the “escalation of serious human rights violations” including the detention of journalist Raman Pratasevich.

Belarus leader: We won’t stop migrants from heading to EU

KYIV, Ukraine (AP) — Belarus' authoritarian President Alexander Lukashenko has warned that his country will not try to stem a flow of illegal migrants to the European Union, a move that comes after the EU tightened its sanctions on the country.

BRUSSELS (AP) — When authorities in Belarus diverted a Ryanair passenger jet to Minsk last month to arrest a dissident journalist who was aboard, their goal may have been to silence a troublesome government critic and send a message to others like him.

KYIV, Ukraine (AP) — Belarus said Tuesday that the new prospective Western sanctions over its diversion of a passenger plane amount to the declaration of an “economic war,” and threatened to retaliate.

BRUSSELS (AP) — The United States, the European Union, Britain and Canada joined forces Monday to impose sanctions on several senior officials in Belarus over the forced diversion to Minsk of a passenger plane travelling between two EU countries last month.

UNITED NATIONS (AP) — In a rare move, the U.N. General Assembly on Friday condemned Myanmar’s military coup and called for an arm embargo against the country in a resolution that demonstrated widespread global opposition to the junta and demanded the restoration of the country’s democratic transition.

Ryanair CEO says diverted flight had to land in Belarus

LONDON (AP) — The pilot of a Ryanair flight that was diverted to Belarus last month, leading to the arrest of a dissident Belarusian journalist, had no alternative but to land the plane in Minsk, the head of the budget airline said Tuesday.

KYIV, Ukraine (AP) — The dissident Belarusian journalist who was arrested when his airliner was diverted to Minsk was brought to a Foreign Ministry news conference on Monday, prompting a journalist to walk out in protest.

VILNIUS, Lithuania (AP) — Lithuania will set up a border tent village to shelter increasing numbers of asylum-seekers from third countries who are entering through neighboring Belarus, officials said Thursday.

PRAGUE (AP) — A Belarusian opposition leader called Wednesday for the creation of an international tribunal to investigate and prosecute crimes reportedly committed by her country's government and its longtime authoritarian leader, President Alexander Lukashenko.

GENEVA (AP) — The daughter of jailed Russian opposition leader Alexei Navalny accepted a human rights award on her father's behalf on Tuesday for his courage in facing down President Vladimir Putin’s government.

KYIV, Ukraine (AP) — The authoritarian president of Belarus signed a law Tuesday that allows prison sentences of up to three years for participating in an unsanctioned demonstration, the latest move in a relentless crackdown on protests against his rule after nearly 27 years in power.

ZURICH (AP) — The only team from Belarus in the Europe-wide Champions Hockey League was removed from next season’s competition on Tuesday because of travel restrictions following the country's decision to divert a flight to arrest a passenger in Minsk.

WARSAW, Poland (AP) — Poland's prime minister vowed Monday that the government would always support the Belarusian people struggling for democracy, weighing in after a senior member of his ruling party suggested Polish solidarity could be conditional.

Lithuania says Belarus could be behind recent migrant influx

VILNIUS, Lithuania (AP) — Lithuania has detained nine Iraqi asylum-seekers who had entered the Baltic country from Belarus, officials said Monday, pointing a finger at Belarus for allegedly being involved in sending repeated groups of immigrants into Lithuania.

WARSAW, Poland (AP) — The Belarusian opposition said Friday a dissident journalist was coerced to appear in a video on state TV in which he wept and praised the country's authoritarian ruler, a broadcast sharply criticized by Western officials.

EU bans overflight of its territory by Belarus airlines

BRUSSELS (AP) — The European Union has slapped a ban on the overflight of the 27-nation bloc’s airspace and the use of its airports by Belarus airlines, in the wake of Minsk’s decision to divert a Ryanair passenger plane to arrest a dissident journalist last month.

WARSAW, Poland (AP) — A Belarusian opposition leader on Friday helped unveil a new monument commemorating Solidarity, the Polish trade union and freedom movement that played a historic role in the collapse of communism in eastern Europe.

KYIV, Ukraine (AP) — While visiting her son in a Belarusian prison, Natallia Makavetskaya saw deep scars on his wrists left by tight handcuffs. She also noticed the yellow tag sewn onto his clothes.