NEW YORK (AP) — A former banker at Goldman Sachs pleaded guilty to an insider trading charge Tuesday, admitting that he stole secrets from the investment bank and gave them to a securities trader...

The disgraced Hollywood mogul was in a Manhattan courtroom — along with new lawyers Jose Baez, Ronald Sullivan and Duncan Levin, and ex-lawyer Benjamin Brafman — as Judge James Burke signed off on the switch. 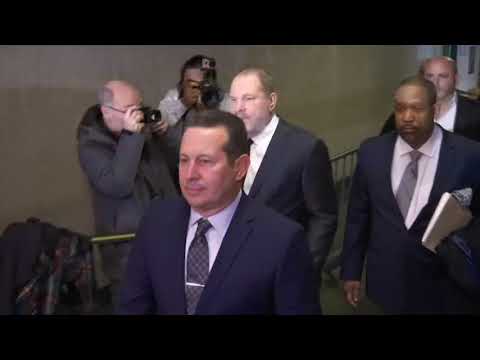 NEW YORK (AP) — Harvey Weinstein is recasting his legal team a month after losing a hard-fought bid to get his sexual assault case thrown out.

Weinstein and high-profile defense attorney Benjamin Brafman said in a statement Thursday that they "have agreed to part ways" and that new lawyers would be introduced next week.

The disgraced movie mogul's trial is tentatively scheduled for May 6.

Lawyer Benjamin Brafman mentioned the date in a court filing Monday in a civil case against Weinstein. He wants actress Ashley Judd's lawsuit put on hold until Weinstein's criminal case is resolved.

The Latest: Weinstein judge: No merit in misconduct claims

The judge overseeing Harvey Weinstein's sexual assault case has found there's no merit in defense claims of misconduct by prosecutors and police.

NEW YORK (AP) — In the latest push to have Harvey Weinstein's sexual assault case thrown out, the movie producer's lawyer said Thursday that a woman accusing him of a 2013 rape pressured a friend to corroborate her account, but that the friend wouldn't "make up a story."

NEW YORK (AP) — The sexual assault case against Harvey Weinstein was roiled Wednesday for the second time in a week by what New York City prosecutors said was a police detective's improper conduct.

Det. Nicholas DiGaudio, whose alleged witness coaching prompted the dismissal of part of the case last week, is now accused of urging one of Weinstein's accusers to delete material from her cellphones before she handed them over to prosecutors.

NEW YORK (AP) — Prosecutors in New York City abandoned part of their sexual assault case against Harvey Weinstein on Thursday after evidence surfaced that a lead police detective coached a witness to keep quiet when she raised doubts about the veracity of one of the allegations.

Weinstein due in court as judge mulls motion to dismiss case

NEW YORK (AP) — Harvey Weinstein is due in court as a New York judge weighs his bid to have some or all of his sexual assault case thrown out.

A court spokesman says Judge James Burke will deliver a partial ruling on defense motions at Thursday's hearing. The disgraced movie mogul's next court date had been scheduled for Nov. 8.

Weinstein faces a six-count indictment covering allegations from three women. He has pleaded not guilty to rape and sexual assault.

NEW YORK (AP) — Harvey Weinstein was indicted on rape and criminal sex act charges, furthering the first criminal case to arise from a slate of sexual misconduct allegations against the former movie mogul.

Harvey Weinstein's lawyer says the former film producer will "vigorously defend" himself after being indicted on rape and other sex crime charges, which he strongly denies.

A grand jury handed it up Wednesday, hours after Brafman said Weinstein had decided not to testify before the secret panel.

NEW YORK (AP) — The woman who has accused Harvey Weinstein of rape in his criminal case was in a decade-long relationship with him that continued after the alleged attack in a Manhattan hotel room in 2013, a lawyer for the film producer said Tuesday.

Attorney Benjamin Brafman made the remark after meeting behind closed doors with prosecutors and a New York judge Tuesday over defense concerns about whether Weinstein can get a fair trial.

WASHINGTON (AP) — Harvey Weinstein's lawyer said in a court filing that federal prosecutors in New York have launched a criminal investigation into the film producer, in addition to a previously disclosed probe by the Manhattan District Attorney.

Attorney Benjamin Brafman said in a declaration filed on May 3 in the Weinstein Co.'s bankruptcy proceedings that he had been advised that Weinstein was a "principal target" of an investigation being conducted by the U.S. attorney's office in Manhattan.

NEW YORK (AP) — A Turkish lawyer was alleged in court papers to have provided thousands of dollars to corrupt a prison guard into smuggling cellphones and alcohol to a wealthy Turkish gold trader who was awaiting trial, according to charges brought Thursday against the guard and comments by a lawyer who represented the trader.

NEW YORK (AP) — A judge postponed jury selection in the trial surrounding a conspiracy to help Iran evade economic sanctions after the star defendant, an international gold trader who had been trying to broker a diplomatic solution to the case, was a no-show Monday.

‘Stealth’ Turkish businessman a no-show for trial this month

NEW YORK (AP) — A Turkish businessman whose criminal case became a controversy at the highest levels of U.S. and Turkish government looks like he'll never make it to trial.

Landlord Steven Croman was sentenced Tuesday to a year in jail. The owner of over 140 Manhattan apartment buildings, Croman pleaded guilty in June to grand larceny after being charged with overstating rent revenue to snag millions of dollars in loans.

NEW YORK (AP) — "Pharma Bro" Martin Shkreli is either a con man who scammed hedge fund investors of millions or a nerdy genius who made them even richer.

The conflicting portraits were offered Wednesday at opening statements of Shkreli's securities fraud trial, a case colored by the ex-pharmaceutical CEO's antics on social media that, despite the urging of his lawyers to lay low, have never subsided

US citizen surrenders to face cyberattack charges in NYC

NEW YORK (AP) — A U.S. citizen living in Moscow was arrested Wednesday after he flew to the United States to surrender to face charges he stole contact information for over 100 million customers of U.S. financial institutions, brokerage firms and financial news publishers, authorities said.