NASHVILLE, Tenn. (AP) — Freshman Republican U.S. Sen. Bill Hagerty has picked more than a dozen former members of the Trump administration to join his Washington office, including a chief of staff...

NASHVILLE, Tenn. (AP) — Ex-Tennessee Gov. Bill Haslam isn't ruling out a future run for office, though he says he isn't currently planning on it.

NASHVILLE, Tenn. (AP) — Top Tennessee Republicans are predicting economic harm if workers at Volkswagen's car assembly plant in Chattanooga vote to unionize, and they are following a blueprint...

The Idaho Republican says he's glad to have the confidence of his colleagues to lead the committee. Risch fills the seat being vacated by the retirement of Sen. Bob Corker, a Republican from Tennessee.

Departure of Trump’s GOP critics in Senate leaves a void

WASHINGTON (AP) — President Donald Trump's most prominent GOP critics on Capitol Hill are close to completing their Senate careers, raising the question of who — if anyone — will take their place as willing to publicly criticize a president who remains popular with nearly 9 in 10 Republican voters.

WASHINGTON (AP) — President Donald Trump is recycling familiar fictions concerning the Iran nuclear deal as he lashes out at a Republican senator who criticized him and a U.S. official who resigned in protest against Trump's plan to pull troops from Syria.

GOP Sen. Corker, a Trump foil, has no idea what’s next

NASHVILLE, Tenn. (AP) — U.S. Sen. Bob Corker of Tennessee, who has delivered some of the most stinging criticism of President Donald Trump from within his own party, says he'll jump in his car next month once his term is over and drive home from Washington.

Beyond that, he insists he has no idea what's in store once he retires.

NASHVILLE, Tenn. (AP) — Republican Sen. Bob Corker of Tennessee says he'll jump in his car next month when his term is finished and drive home from Washington.

He insists he's got no idea what's next after that. That's despite lingering questions about whether the retiring senator will challenge President Donald Trump for the 2020 GOP nomination.

Corker hasn't ruled out running, but says he shouldn't be listed as "strongly considering."

Tennessee gov to decide on Senate bid after leaving office

The two-term governor told The Associated Press late Tuesday that he's planning a short vacation with his wife after leaving office Jan. 19 to consider his decision. Haslam said he doesn't have a deadline but won't take six months.

Alexander said in a news release that he was deeply grateful for being elected to more combined years as governor and senator than anyone else in Tennessee. But the 78-year-old politician said it's now time for someone else to have that privilege. He will serve out his final two years.

According to federal campaign finance reports due Thursday, Blackburn's campaign spent about $16 million throughout the election cycle, while Democrat Phil Bredesen's campaign shelled out around $19 million.

Senators wrestle with rebuke of Saudis for Khashoggi killing

WASHINGTON (AP) — Senators are considering multiple pieces of legislation to formally rebuke Saudi Arabia for the slaying of journalist Jamal Khashoggi, with momentum building for a resolution to call Saudi Crown Prince Mohammed bin Salman complicit in the killing.

Senate Foreign Relations Committee Chairman Bob Corker, R-Tenn., said he believes if the crown prince were put on trial, a jury would find him guilty in "about 30 minutes."

NASHVILLE, Tenn. (AP) — The Senate has confirmed a Tennessee attorney to become the U.S. Department of Agriculture's general counsel.

WASHINGTON (AP) — President Donald Trump's embrace of Saudi Arabia has exposed a foreign policy rift in the Republican Party, as some of his GOP colleagues warn that not punishing the kingdom for its role in killing a U.S.-based columnist will have dangerous consequences. 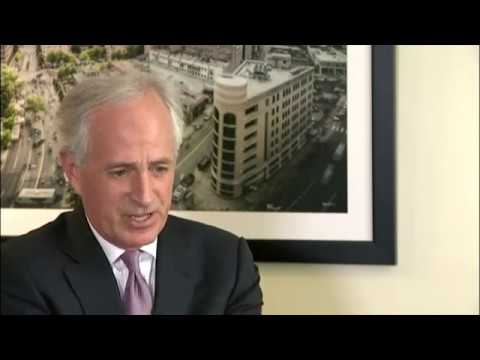 The chairman and ranking member of the Senate Foreign Relations Committee have written to the president demanding that his administration "make a determination" about whether Saudi Crown Prince Mohammed bin Salman was responsible for the killing Jamal Khashoggi.

NASHVILLE, Tenn. (AP) — Women voters were split on electing Republican Marsha Blackburn as Tennessee's first female U.S. senator, and their age often shaped their preference, according to a wide-ranging survey of voters in Tennessee.

Eley served on Lee's business advisory campaign coalition. Before that, he was the chief growth officer of DBI Services and founder of Infrastructure Corporation of America. He also served in former Nashville Mayor Bill Boner's administration as director of economic and community development.

NASHVILLE, Tenn. (AP) — Tennessee Democrats began Election Day feeling like they had their best chance in years to regain some political clout in their conservative state.

Those aspirations quickly disappeared, as voters turned out in droves largely to give President Donald Trump a stamp of approval and echo much of what Republicans touted on the campaign trail.

NASHVILLE, Tenn. (AP) — Republican candidates maintained control in Tennessee in Tuesday's election with the help of high voter turnout throughout the state.

NASHVILLE, Tenn. (AP) — With open seats for governor and U.S. senator, Tennessee Democrats believe they have their best chance in years to gain ground in Tuesday's general election.

The votes of women could be key.

NASHVILLE, Tenn. (AP) — In Tennessee's U.S. Senate race, Democrat Phil Bredesen and Republican Marsha Blackburn say it would be unconstitutional for President Donald Trump to use an executive order to end so-called birthright citizenship for children born in the U.S. of non-citizen parents.

Bredesen said Tuesday what Trump has proposed is "clearly contrary to the Constitution" and is more about "midterm politics."

NASHVILLE, Tenn. (AP) — Early voting is underway for the Nov. 6 general election in Tennessee, with contested, open races for governor and U.S. Senate at the top of the ballot.

The two statewide contests have brought a surge in midterm turnout so far, with 720,600 early and absentee ballots cast through Wednesday.

Voters will also make their picks for the U.S. House and the Republican-led General Assembly.

Shut out for years, Tennessee Democrats are now optimistic

MEMPHIS, Tenn. (AP) — Tennessee Democrats know something about disappointment. The last time voters chose a governor, the party pinned its hopes on a longshot punchline named Charlie Brown, who was trounced by 30 percentage points.

Two years before that, the Democrat who unexpectedly bested a weak primary field for a U.S. Senate seat was promptly disavowed by party leaders for his anti-gay views. Republican Bob Corker won re-election in a blowout.

WASHINGTON (AP) — The Latest on President Donald Trump's decision to pull the U.S. from an arms control agreement with Russia (all times local):

There doesn't seem to be a consensus in Congress about whether President Donald Trump is making the right move when he says he will withdraw the United States from an arms control agreement with Russia.

NASHVILLE, Tenn. (AP) — Tennesseans are voting in record numbers with close to 350,000 ballots cast in the first three days of early voting.

Tennesseans are voting in record numbers with close to 350,000 ballots cast in the first three days of early voting.

Tennessee's Republican nominees for governor and Senate rallied in front of supporters at an event in Franklin, in the home county of both of the candidates.

WASHINGTON (AP) — The Latest on the U.S. and the missing Saudi writer Turkish authorities say was slain inside his country's consulate in Istanbul (all times local):

The Washington Post reports that U.S. intelligence intercepts outlined a Saudi plan to detain a prominent journalist and critic who disappeared a week ago.

2nd US Senate debate in Tennessee set for Wednesday

The debate Wednesday will take place at the University of Tennessee's Howard H. Baker Jr. Center for Public Policy.

NASHVILLE, Tenn. (AP) — Democrat Senate candidate Phil Bredesen on Monday faced some backlash from a Tennessee crowd for once again declining to say how he would vote on Supreme Court nominee Brett Kavanaugh.

The Latest: Trump declares Blackburn would be ‘true fighter’

President Donald Trump is barnstorming for the Republican Senate candidate locked in a tight race in Tennessee.

The president appeared at a rally in Johnson City to support U.S. Rep. Marsha Blackburn, who is facing Democratic former Gov. Phil Bredesen (BRED'-uh-sen). They are competing for the seat currently held by retiring Republican Sen. Bob Corker.

Bredesen supports FBI probe, still mum on how he would vote

NASHVILLE, Tenn. (AP) — Tennessee Democrat Phil Bredesen says an FBI investigation of a sexual assault allegation against Supreme Court nominee Brett Kavanaugh is a chance to restore "self-respect" in the Senate, but the Senate candidate stopped short of saying how he would vote on the nomination.

Bredesen says if the claims have substance, senators should take that into consideration before voting.

Rubio: Bredesen tries to ‘pull a fast one’ in Dem Senate bid

BRENTWOOD, Tenn. (AP) — Republican U.S. Sen. Marco Rubio said Friday that Democratic former Tennessee Gov. Phil Bredesen is "trying to pull a fast one" on voters by promising to be moderate if he's elected to the Senate in a critical race.

Trump backs down, says he misspoke on Russia meddling

WASHINGTON (AP) — Blistered by bipartisan condemnation of his embrace of a longtime U.S. enemy, President Donald Trump on Tuesday backed away from his public undermining of American intelligence agencies, saying he simply misspoke when he said he saw no reason to believe Russia had interfered in the 2016 U.S. election.

HELSINKI (AP) — In an extraordinary embrace of a longtime U.S. enemy, President Donald Trump on Monday openly questioned his own intelligence agencies' firm finding that Russia meddled in the 2016 U.S. election to his benefit, seeming to accept Russian President Vladimir Putin's insistence that Moscow's hands were clean.

Trump questions US intel, not Putin, on Russia 2016 meddling

HELSINKI (AP) — Standing next to Russia's Vladimir Putin, President Donald Trump openly questioned his own intelligence agencies' conclusions that Moscow was to blame for meddling in the 2016 U.S. election to Trump's benefit and seemed to accept Putin's insistence that Russia's hands were clean.

AP FACT CHECK: Trump and Corker are going at it again

WASHINGTON (AP) — President Donald Trump and Republican Sen. Bob Corker are lobbing insults at each other again. The slings and arrows are largely a matter of opinion — is Trump "debasing" the nation as Corker says? Is the senator "incompetent" and a "lightweight," as the president tweeted?

But aside from those negative reviews of each other, Trump, in particular, got a couple of facts wrong.

A look at the matter:

SANDERS: "Senator Corker worked with Nancy Pelosi and the Obama administration to pave the way for that legislation and basically rolled out the red carpet for the Iran deal."