DENVER (AP) — A convicted Colorado man has agreed to pay $6 million to the parents of Shanann Watts, his pregnant wife he killed last year.

DENVER (AP) — The Colorado house of a man who killed his family is set to go up for sale at auction next month.

The Denver Post reported Tuesday that the five-bedroom, four-bathroom house in...

DENVER (AP) — A Colorado man strangled his pregnant wife in their bed before driving her body and their two daughters to a worksite where he smothered the girls with a blanket, according to...

Colorado killer Watts appears to be in Wisconsin custody

MILWAUKEE (AP) — A Colorado man sentenced to life behind bars for killing his pregnant wife and two young daughters appears to have been moved to a Wisconsin prison.

The Colorado Department of Corrections said earlier this week that 33-year-old Christopher Watts was transferred out of state for safety reasons, but didn't say where.

DENVER (AP) — A Colorado man who was sentenced to life in prison for killing his pregnant wife and two young daughters has been transferred to an out-of-state prison.

Department of Corrections spokesman Mark Fairbairn tells The Denver Post that 33-year-old Christopher Watts was moved to an undisclosed prison for "safety and security" reasons.

DENVER (AP) — The parents of a Colorado woman murdered by her husband are seeking financial damages in a lawsuit filed on the same day he was sentenced to life in prison.

Christopher Watts was sentenced Nov. 19 to three consecutive life sentences for killing his pregnant wife, Shanann, and the couple's daughters, 4-year-old Bella and 3-year-old Celeste. He had previously pleaded guilty to charges of murder, unlawful termination of a pregnancy and tampering with a deceased human body.

Convicted murderer quiet on why he killed wife, daughters

GREELEY, Colo. (AP) — Christopher Watts cried, shook and stared into his lap as a judge told him he would spend the rest of his life in prison for the murders of his pregnant wife and their two young daughters.

But he spoke only once at his sentencing hearing and that was to decline the opportunity to give a statement and perhaps answer the question gnawing at his relatives, his suburban Denver neighbors, and others: Why? 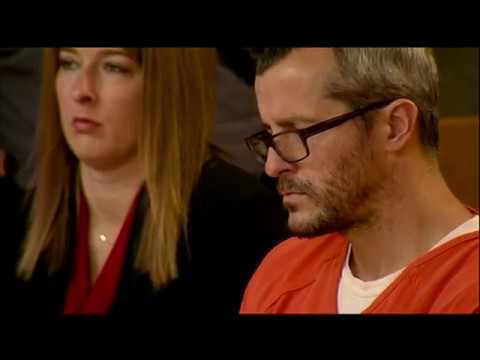 DENVER (AP) — The Latest on sentencing of man who pleaded guilty to killing his pregnant wife and two young daughters (all times local):

GREELEY, Colo. (AP) — A Colorado man charged with killing his pregnant wife and two daughters pleaded guilty Tuesday under a plea deal allowing him to avoid the death penalty but putting him in jail for life without a chance of parole.

Christopher Watts entered his plea Tuesday during a court hearing, replying "guilty" nine times in response to Judge Marcelo Kopcow's reading of each charge against him in the deaths of Shanann Watts, 34, and their children, Bella, 4, and Celeste, 3.

LONGMONT, Colo. (AP) — Attorneys for a Colorado man accused of killing his wife and two daughters have asked for a hearing in open court on whether to keep the autopsy reports secret.

LONGMONT, Colo. (AP) — A northern Colorado coroner is asking a judge to seal the autopsy results in the deaths of a pregnant woman and her two young daughters.

The Weld County coroner made the motion Monday after Judge Marcelo Kopcow ruled Friday that county prosecutors did not have the standing to make the request.

DENVER (AP) — A judge has denied prosecutors' request to block release of the autopsy reports of a Colorado woman and her two young daughters who were found dead at an oil work site, temporarily siding with media organizations.

Prosecutors have charged 33-year-old Christopher Watts with killing his pregnant wife, Shanann, and their children, Bella and Celeste.

The Weld County district attorney's office argued that the cause of their deaths will be critical evidence during Watts' trial.

GREELEY, Colo. (AP) — The Greeley Tribune and other Colorado news media are fighting an attempt by prosecutors to seal autopsies reports on a woman and her two children ahead of the trial of their husband and father, who is charged with first-degree murder.

BOULDER, Colo. (AP) — A judge has denied a request to investigate if prosecutors or police leaked information to the media in the case of a Colorado man charged with killing his family and dumping their bodies at an oil worksite.

DENVER (AP) — Attorneys for a Colorado man charged with killing his family and dumping their bodies at an oil worksite want an investigation into whether prosecutors or police leaked information about the case to the media.

PINEHURST, N.C. (AP) — Shanann Watts will be remembered as a "woman of love" and her two young two daughters as being filled with life and joy, a priest said Saturday during a funeral service for the slain Colorado family found at an oil work site.

The hour-long service in Pinehurst, North Carolina, included no reference to 33-year-old Christopher Watts, the husband and father charged in the killings.