TOKYO (AP) — Japanese author Haruki Murakami has a remedy for those who need relaxation from stress and worries in a pandemic — bossa nova.

BERLIN (AP) — A German classical music foundation says it has found the rightful heirs of a Jewish woman who was forced by the Nazis to sell two scores by composer Franz Liszt before being...

NEW YORK (AP) — Claude Bolling, the French pianist, composer and arranger who attained a worldwide following through his melodic blend of jazz and classical influences and stayed on the Billboard...

Ivry Gitlis, a violinist who spanned genres, dies at 98

PARIS (AP) — Ivry Gitlis, an acclaimed violinist who played with famed conductors, rock stars and jazz bands around the world and worked to make classical music accessible to the masses, has died...

Salzburg Festival forges ahead with full program for 2021

The Salzburg Festival in Austria is forging ahead with a full program for 2021 after becoming one of the few classical music organizations to manage a limited program last summer.

With much of the classical music industry shuttered by the novel coronavirus pandemic, one of the leading management agencies has been acquired by an unusual buyer in an unconventional...

BEIJING (AP) — China is holding its first classical music festival since the start of the coronavirus pandemic, featuring musicians from the outbreak's initial epicenter in an attempt to aid in...

SEOUL, South Korea (AP) — A film about a classical musician’s struggle to balance his career dreams and life in contemporary Mumbai will this week return India to the main competition at the...

Classical agency Columbia Artists says it will shut down

From Italy, Muti looks to reopen US classical music scene

The success of the first album from this string band in 2011 showed there's...

Salzburg Festival will go on this year but in shortened form

The Salzburg Festival will be one of classical music’s few offerings in the summer of the coronavirus pandemic, staging a reduced 100th anniversary celebration with capacities limited to about...

VIRUS DIARY: A cancer survivor takes comfort in her piano

NEW YORK (AP) — Since mid-March, when my NYC friends and I began sheltering at home, my piano has been a big source of comfort. I pound out the keys to Broadway tunes ("On My Own" from “Les...

SOAVE, Italy (AP) — Riccardo Muti will conduct a youth orchestra in an open-air concert launching the annual Ravenna Festival next month in what organizers billed Friday as Italy’s first live...

Devastated after her graduate recital was canceled due to coronavirus concerns, Brooke Mead nearly gave up. Faced with recording the concert alone, at home, the 23-year-old viola student stopped...

NEW YORK (AP) — Javier Camarena was at his home in Zurich singing an aria from Bellini’s “Il Pirata” when the screen for the video feed split, and he was joined by Metropolitan Opera music... 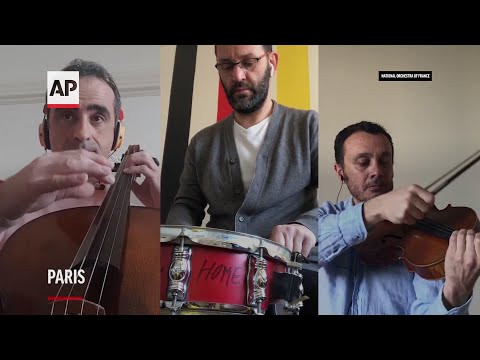 WARSAW, Poland (AP) — Krzysztof Penderecki, an award-winning conductor and one of the world’s most popular contemporary classical music composers whose works have featured in Hollywood films like...

The “Da Vinci Code” author is working on a picture story, “Wild Symphony," scheduled to be published Sept. 1....

PRAGUE (AP) — The Czech capital, Prague, on Monday signed a partnership agreement with the capital of Taiwan, Taipei - three months after canceling a similar deal with Beijing and angering the...

Prague to ink partnership with Taipei after snubbing Beijing

PRAGUE (AP) — The city of Prague, the Czech capital, approved Thursday a partnership agreement with the capital of Taiwan, Taipei.

The move comes two months after Prague revoked a similar...

WASHINGTON (AP) — The Supreme Court says Justice Ruth Bader Ginsburg has returned to the court after a two-night stay in a hospital.

The court says the 86-year-old Ginsburg is attending an...

PRAGUE (AP) — Prague's City Hall has made a step to revoke its partnership agreement with the Chinese capital, a move that has angered China.

‘Wow child’ is special guest of orchestra that inspired him

BOSTON (AP) — A boy who charmed the world by exclaiming "Wow!" at the end of a classical music performance was a special guest of the orchestra that inspired his delight.

Organizers: Plácido Domingo to be absent from Batuta Prizes

LIMA, Peru (AP) — Holding a violin, saxophone or clarinet with handcuffed hands, some two-dozen prisoners were transported in an armored bus to learn music alongside the symphony orchestra in the...

TEHRAN, Iran (AP) — Aficionados of Western classical music have carved out a niche for themselves in Iran, where cultural expression remains tightly controlled by strict rules imposed after the...

BOSTON (AP) — A performing arts group has found the child who was literally wowed by a recent classical music concert.

The Handel & Haydn Society had just finished a rendition of Mozart's...

Orchestra searching for child who charmed crowd with ‘wow!’

BOSTON (AP) — America's oldest performing arts group is looking for a child who was literally wowed by a recent classical music concert.

The Handel & Haydn Society had just finished its...

PHILADELPHIA (AP) — The Philadelphia Orchestra's music director has gone to the dogs. And the cats.

BOSTON (AP) — The Boston Symphony Orchestra is gearing up for an ambitious new season that will include its first joint concert with Germany's acclaimed Gewandhaus Orchestra.

CHICAGO (AP) — A line of classical musicians marching with picket signs in front of the Chicago Symphony Orchestra's historic downtown building is fast becoming one of the city's must-see...

Igor Levit not content to be heard only through piano

NEW YORK (AP) — Igor Levit arrived at John F. Kennedy International Airport's Terminal 1 ahead of his first concert at Carnegie Hall's main Stern Auditorium. It was the last day of February and...

CAMBRIDGE, Mass. (AP) — Benjamin Zander's eyes are shining, and he'd very much appreciate it if yours were, too.

The internationally acclaimed conductor has spent half his life leading the...

Andre Previn, the pianist, composer and conductor whose broad reach took in the worlds of Hollywood, jazz and classical music, always rejecting suggestions that his bop 'n' blues moonlighting...

WARSAW, Poland (AP) — The winner of the world's 1st Chopin competition on historic pianos says the search for the original sound restores the appeal of classical music and helps artists understand the composer's intentions.

Tomasz Ritter of Poland was named the best of 30 young pianists at the 1st International Chopin Competition on Period Instruments this month.

ST. PAUL, Minn. (AP) — The Minnesota Orchestra's two-week tour of South Africa is taking its performances to audiences that may have never heard classical music before.

CLEVELAND (AP) — The Cleveland Orchestra has suspended its longtime concertmaster following the publication of two accounts detailing sexual misconduct allegations against him.

The Plain Dealer reports the orchestra said Friday that William Preucil, concertmaster since 1995, had been suspended until "further notice."

BERLIN (AP) — Five female musicians accuse organizers of an Austrian classical music festival of not acting on sexual abuse complaints they made for years against its artistic director, according to an open letter published Wednesday.

The artists alleged that Austrian conductor Gustav Kuhn subjected them to unwanted kisses, groping, bullying and public humiliation during their time at the Tyrolean Festival Erl between 1998 and 2017.

US first lady welcomed in Belgium with music and fashion

BRUSSELS (AP) — U.S. first lady Melania Trump returned to the international stage Wednesday as she mingled with the spouses of America's closest allies over classical music, fashion and chocolate.

As President Donald Trump harangued Germany and other allies at a NATO summit in Brussels, his wife chatted amiably with some of their spouses at a music conservatory in a wooded park in Waterloo, near the Belgian capital.

Petrenko will be the orchestra's music director — a broad role that incorporates Dutoit's former position.

It’s OK to clap between movements at the symphony

PITTSBURGH (AP) — Imagine this: You're at your local symphony hall and the orchestra has just delivered a spectacular performance of the first movement of Brahms' Symphony No. 4.

As the notes fade away, you close your eyes, basking for a moment in that majestically solemn aftermath — but then, a small smattering of applause breaks out and quickly dies away.

WINDSOR, England (AP) — Nothing quite captured the trans-Atlantic nature of Saturday's royal wedding as much as the guest preacher whose sermon brought American flair to a very English church service.

The Most Rev. Michael Bruce Curry, the first black leader of the Episcopal Church in the United States, was hand-picked by Prince Harry and Meghan Markle to address their 600 wedding guests.

MODESTO, Calif. (AP) — A 7-Eleven in California has found a way to keep people from panhandling and loitering outside the store: crank up classical music.

Sukhi Sandhu, who owns the franchise in Modesto, said his customers tell him they feel safer since he started blasting symphonies and occasional operas over outdoor speakers.

The BSO announced Thursday that John Oliver died at a Great Barrington hospital on Wednesday after a long illness. He was 78.

Oliver founded the entirely volunteer chorus in 1970 and was its only conductor until his retirement in 2015. The chorus maintains a roster of more than 300 singers.

NEW YORK (AP) — J.D. McClatchy, a revered and versatile man of letters praised as a poet, librettist, educator, editor and translator, died Tuesday night at his home in Manhattan. He was 72.

Publisher Alfred A. Knopf announced that McClatchy, known as "Sandy" to his friends, had been battling cancer and died at his home in Manhattan.