Conor McGregor has announced his retirement for the third time in four years.

Conor McGregor holds all the UFC cards after comeback win

LAS VEGAS (AP) — After three years without a victory, Conor McGregor needed only 40 seconds to reclaim his place at the center of the mixed martial arts world.

LAS VEGAS (AP) — Conor McGregor's opening flurry — a punch that missed, followed by shoulder and elbow shots to the face — bloodied Donald Cerrone's nose. He then floored Cerrone only 20 seconds...

LAS VEGAS (AP) — Conor McGregor became a two-division UFC champion because he was a tremendous fighter. He became the biggest mixed martial artist in the world only because he talked an even...

LAS VEGAS (AP) — Conor McGregor used to train whenever he felt like it, and he stayed up late every night. He would sleep deep into the daylight hours, and he perpetually showed up late for almost...

Donald Cerrone posted a booze-fueled photo to hype his anticipated fight against Conor McGregor: A bottle of Cerrone's preferred cheap American-style beer vs. the Irish fighter's own...

MOSCOW (AP) — Khabib Nurmagomedov said Friday that Conor McGregor would need to win 10 straight fights to earn a rematch for his UFC title.

The retired mixed martial arts fighter from Ireland pleaded guilty to a charge of assault...

MOSCOW (AP) — Conor McGregor will return to mixed martial arts in January with a UFC fight in Las Vegas.

The Irish fighter said Thursday he will return "fully focused" on Jan. 18 at the...

The last time Khabib Nurmagomedov was in an octagon, he didn't leave through the door.

He's hoping to make an exit more befitting a champion this weekend.

Return of the Mac-killer: Nate Diaz ends hiatus at UFC 241

ANAHEIM, Calif. (AP) — The mostly empty arena rumbled with outsized excitement when Nate Diaz stepped onto the stage. The fans erupted into cheers while Diaz lit a joint and took a big drag before...

CHICAGO (AP) — Two overlooked UFC stars face off Saturday in a three-round lightweight fight that could bring some clarity to a chaotic division.

MIAMI (AP) — Prosecutors have dropped charges against star fighter Conor McGregor after he allegedly smashed a fan's phone outside a Miami hotel.

ATLANTA (AP) — Max Holloway believes the path to recognition as the best pound-for-pound fighter in UFC goes through the lightweight division.

McGregor said last week he was quitting mixed martial arts but Nurmagomedov, who beat the Irish...

Alvarez, Johnson aiming to dominate in One Championship

MIAMI (AP) — Mixed martial artist and boxer Conor McGregor is facing a civil lawsuit after being charged in South Florida with stealing the cellphone of someone who was trying to take his... 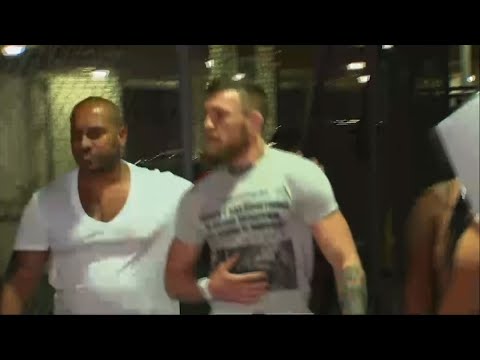 MIAMI (AP) — Mixed martial artist and boxer Conor McGregor has been arrested in South Florida for stealing the cellphone of someone who was trying to take his photo, authorities...

NEW YORK (AP) — Years before UFC was worth billions, Dana White used to plead his case with ESPN for air time.

This was no negotiation for a big-money rights package — the UFC president simply wanted highlights on "SportsCenter."

"I was out there all the time," White said of his trips to ESPN's Connecticut headquarters. "For most of the time, the last 18 years, I was battling just to get coverage. We used to fight just to try and get covered by them."

LAS VEGAS (AP) — Nevada fight regulators have postponed hearings on the suspensions of Conor McGregor and Khabib Nurmagomedov for a brawl after UFC 229 in Las Vegas.

Nurmagomedov says he could reconcile with McGregor

The two fighters traded verbal blows before the Oct. 6 fight and Nurmagomedov sparked a brawl with McGregor's team after winning by submission.

"Everything is possible. Just as McGregor and I feuded, so we could reconcile," Nurmagomedov said.

When a National Guardsman was killed while apparently trying to break up a fight outside an establishment variously described as a cafe and nightclub early Sunday morning, Nurmagomedov called for a crackdown on the local nightlife in his mostly-Muslim home region of Dagestan.

ANN ARBOR, Mich. (AP) — Chase Winovich chose to stay in college to pursue championships and improve his standing for the NFL draft.

No. 5 Michigan seems to have a clear path to a Big Ten title and perhaps the College Football Playoff. And the defensive end appears to be improving his stock among pro scouts.

The fifth-year senior also is having a lot of fun along the way, trying to live his life like UFC superstar Conor McGregor, whom he has befriended.

LAS VEGAS (AP) — Khabib Nurmagomedov and Conor McGregor will remain suspended at least until December because of a brawl inside and outside the octagon after their UFC match in Las Vegas, but the Nevada Athletic Commission on Wednesday allowed some prize money to be released to Nurmagomedov.

Neither the Russian from Dagestan nor the Irishman attended a brief hearing in Las Vegas at which Nurmagomedov was called the catalyst for the Oct. 6 "chaos."

Column: How about some other sports for Conor McGregor?

Conor McGregor couldn't win his fight, though he seemed to help the Dallas Cowboys win theirs.

Just ask Jerry Jones, who had reason to be smitten with the UFC star after the team Jones owns blew out Jacksonville on Sunday with the fighter/whiskey salesman providing the emotional spark.

"He just energized every place he went in the stadium," Jones said. "You'd like to say we're going to have to get him in here for every game in order to have a good first half, at least."

So did his Dallas teammates with the UFC star watching after some pregame pumping up.

Prescott threw two touchdown passes to Cole Beasley for a big halftime lead and rushed for a career-high 82 yards with another score in the Cowboys' 40-7 victory over the Jacksonville Jaguars on Sunday.

LAS VEGAS (AP) — UFC fighters Khabib Nurmagomedov and Conor McGregor are being suspended by the Nevada Athletic Commission for a brawl that erupted inside and outside the octagon after their lightweight title fight last weekend in Las Vegas, an official said.

LAS VEGAS (AP) — UFC fighters Khabib Nurmagomedov and Conor McGregor are being suspended by the Nevada Athletic Commission for a brawl that erupted inside and outside the octagon after their lightweight title fight last weekend in Las Vegas, an official said.

MOSCOW (AP) — Russia's President Vladimir Putin has met with Khabib Nurmagomedov to congratulate him on winning the UFC lightweight title, and defended the fighter's actions in the brawl that followed his victory over Conor McGregor.

Putin hailed Nurmagomedov's "convincing" victory in the highly anticipated mixed martial arts bout in Las Vegas on Saturday, and said the champion's decision to then climb over the cage and fight with members of McGregor's corner had been provoked by insults.

By The Associated PressOctober 8, 2018 GMT

DENVER (AP) — Wade Miley pitched masterfully into the fifth inning before turning it over to a lights-out Milwaukee bullpen, 38-year-old catcher Erik Kratz kept up his torrid hitting and the Brewers beat the Colorado Rockies 6-0 in Game 3 on a cool, misty Sunday to sweep their NL Division Series.

Column: Fight poses a question: Is this UFC or WWE?

LAS VEGAS (AP) — Khabib Nurmagomedov apologized, though it was clear he wasn't sorry about much.

Not after putting a beating on Conor McGregor in their highly anticipated fight. Not after leaping out of the octagon to settle another score while a couple of his thugs jumped in to deliver a few more blows to McGregor's head.

And certainly not after getting a call from Vladimir Putin offering congratulations for a job well done.

LAS VEGAS (AP) — Khabib Nurmagomedov was the calm, glowering foil to Conor McGregor's antics for six months while the loquacious Irishman built a frenzy of hype around their UFC lightweight title fight.

Melee at UFC 229 after Nurmagomedov chokes out McGregor

LAS VEGAS (AP) — A few seconds after Conor McGregor tapped Khabib Nurmagomedov's arm and submitted to the champion's choke, Nurmagomedov climbed the cage and leaped at the men in McGregor's corner, setting off a prolonged brawl inside and outside the octagon.

A seminal moment in mixed martial arts was immediately overshadowed by a tawdry ending Saturday night when the UFC's infuriated lightweight champion took his conflict with McGregor beyond their bout.

LAS VEGAS (AP) — The last time Conor McGregor was in a UFC cage, he was merely the biggest star in the history of mixed martial arts.

In the 23 months since, the loquacious Irishman has become exponentially richer and much more famous. With his boxing loss to Floyd Mayweather as the catalyst, McGregor has ascended to a new level of stardom and success outside MMA and outside sports.

Even UFC President Dana White wondered whether McGregor (21-3) would decide to fight on, but he did.

McGregor late, Nurmagomedov not in a mood to wait

LAS VEGAS (AP) — Khabib Nurmagomedov wasn't about to wait around for a tardy Conor McGregor, who arrived at what was supposed to be their final prefight press conference together to find the UFC lightweight champion already gone.

No worries, they'll meet soon enough when it really matters for both men.

NEW YORK (AP) — Conor McGregor bellied up to his makeshift bar, plopped his dress shoes on the table and took a swig of his own Irish whiskey.

Take a shot for every profanity belched out by the returning star?

Column: Pay to watch golf? Tiger and Phil in a money grab

It's probably pure coincidence that the Tiger Woods-Phil Mickelson match on Thanksgiving weekend was announced the same week as the first anniversary of one of the biggest con jobs in pay-per-view history.

You might remember a year ago when Conor McGregor went from mixed martial arts into boxing to challenge Floyd Mayweather Jr., and the gullible fans of UFC couldn't wait to plunk down $100 to see all the action unfold on their TV screens at home.

Conor is back: UFC says McGregor will fight Oct. 6 in Vegas

The UFC dramatically announced the matchup Friday with a promotional video to close a news conference promoting its slate of fight cards for the rest of 2018.

The mixed martial arts star pleaded guilty on Thursday to disorderly conduct and will perform five days of community service to resolve charges stemming from a backstage melee at a New York City arena in which he was caught on camera hurling a hand truck at a bus full of fighters.

NEW YORK (AP) — Mixed martial arts star Conor McGregor expressed regret Thursday for a backstage melee at a Brooklyn arena that saw him caught on camera hurling a hand truck at a bus full of fighters, and he is negotiating a plea deal to resolve criminal charges in the case.

Boxer Floyd Mayweather is the champ on Forbes money list

Forbes magazine reported Tuesday that the boxer is again the highest paid athlete and for the fourth time in seven years. His estimated earnings, including endorsements, for 2017 were $285 million. That stems largely from his bout last August with UFC's Conor McGregor.