PARKLAND, Fla. (AP) — A group of survivors from the 2018 Florida high school massacre is hitting the road to help register young voters across the country before the November election, seeking to...

AUGUSTA, Maine (AP) — A Florida school shooting survivor and gun control advocate is urging Maine lawmakers to act now to end gun violence instead of waiting for a mass shooting.

PARKLAND, Fla. (AP) — A documentary of the deadly shooting at a Florida high school is premiering at the Tribeca Film Festival in New York this weekend.

PARKLAND, Fla. (AP) — The massacre that left 17 dead at Marjory Stoneman Douglas High School pushed students, parents, officials and others into the national limelight, something most never sought. A look at where some of the most prominent are today: 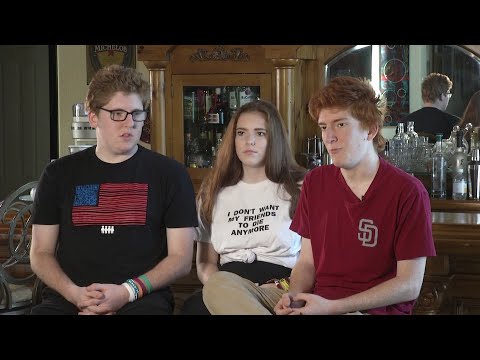 PARKLAND, Fla. (AP) — Nine months after 17 classmates and teachers were gunned down at their Florida school, Parkland students are finally facing the moment they've been leading up to with marches, school walkouts and voter-registration events throughout the country: their first Election Day.

PARKLAND, Fla. (AP) — Nine months after 17 classmates and teachers were gunned down at their Florida school, Parkland students are finally facing the moment they've been leading up to with marches, school walkouts and voter-registration events throughout the country: their first Election Day.

CAMBRIDGE, Mass. (AP) — Youth activists including Parkland shooting survivor David Hogg will be speaking at Harvard University about how to engage young voters.

Harvard's Kennedy School is slated to host the panel Monday as part of a series of forums at its Institute of Politics.

Youths participating in Monday's mock fashion show on Boston City Hall plaza donned helmets and gas masks as they walked down a catwalk to call for stricter gun laws.

SPRINGFIELD, Mass. (AP) — Gun control advocates and one of the survivors of the Parkland, Florida school shooting are finishing a 50-mile, four-day march in Massachusetts to the headquarters of gun manufacturer Smith & Wesson.

The student-led group is gathering outside company headquarters Sunday in Springfield.

WORCESTER, Mass. (AP) — Gun control advocates, including one of the survivors of the Parkland, Florida, school shooting and the parents of one of the victims, are marching 50 miles (80 kilometers) across Massachusetts this week to the headquarters of gun manufacturer Smith & Wesson as part of a youth-led push for stricter gun laws.

BOSTON (AP) — A survivor of the Florida school shooting and a parent of one of the victims are planning to join students in Massachusetts this week for a 50-mile march calling for gun law reforms.

The march is scheduled to start Wednesday in Worcester and end Sunday in Springfield at the headquarters of gun manufacturer Smith & Wesson .

‘The Bachelorette’ and new fiancé ready to move forward

Shortly after the season premiere, it was discovered that Yrigoyen had liked Instagram posts that mocked transgender people, feminists and Parkland, Florida, shooting survivor David Hogg. He responded quickly by deleting the account and apologizing, describing the likes as "mindless taps."

Yrigoyen, 29, said the hardest part was criticism that Kufrin received.

LAS VEGAS (AP) — Survivors of a high school shooting in Florida joined with teenagers affected by the Las Vegas Strip massacre during a town hall in Nevada addressing school safety and gun laws.

FORT LAUDERDALE, Fla. (AP) — The polarizing survivor of the Parkland mass shooting has been falsely labeled a crisis actor, vilified by the NRA and called names by TV hosts. And David Hogg isn't avoiding self-criticism in his new book. In fact, he calls himself "arrogant," ''skinny" and details his rejection by girls.

ST. LOUIS (AP) — A survivor of the deadly shooting at Florida's Marjory Stoneman Douglas High School has told a St. Louis gathering that political pressure is the only way to change gun laws.

WATERVILLE, Maine (AP) — A Maine mayor who narrowly survived a recall effort in the wake of a tweet making fun of a Parkland, Florida, high school shooting survivor says he deserves an apology from his critics.

The attempt to recall Waterville Mayor Nick Isgro failed on Tuesday. He has been a source of controversy in Maine since April, when he posted a tweet that said "Eat it, Hogg" in reference to outspoken shooting survivor David Hogg.

MEMPHIS, Tenn. (AP) — One of the Parkland, Florida, school shooting survivors campaigning for gun controls has suggested he plans a protest against FedEx.

Activist David Hogg tweeted Wednesday, "See you this summer," with a smiley face emoji, "1000 Ridgeway Loop Memphis, Tennessee." The teenager is among the Marjory Stoneman Douglas High School students who have helped lead the movement after the shooting there Feb. 14.

PARKLAND, Fla. (AP) — The Latest on the aftermath of the shooting at a Parkland, Florida, high school that killed 17 people. (all times local):

Survivors of the Parkland, Florida, school shooting are asking the media not to glorify the alleged shooter by covering chilling cellphone videos, urging instead to focus on the victims.

Marjory Stoneman Douglas senior David Hogg tweeted a plea to a local newspaper, saying, "Please do not post his name you are giving him what he wants, fame."

PARKLAND, Fla. (AP) — Students at more than 1,000 schools across the country are registering young voters in lunchrooms, hallways and even at upcoming graduation ceremonies in a week of activism aimed at electing lawmakers who support gun reforms in response to school shootings in Florida and Texas.

COCONUT CREEK, Fla. (AP) — A Florida police department has suspended an officer for writing on Facebook that a student activist who survived a shooting massacre should be run over by a car.

Mayor who tweeted “Eat it, Hogg” faces recall on June 12

WATERVILLE, Maine (AP) — Voters in a Maine city will decide next month whether to keep their mayor in office in the wake of the Republican's use of Twitter to mock a school shooting survivor.

The #NeverAgain leader and high school senior says he's postponing college for a year to engage in gun-reform activism, focusing mostly on getting students and others registered to vote for the elections and raising awareness about gun lobbies.

WATERVILLE, Maine (AP) — A Republican mayor of a Maine city now faces a vote that could remove him from office over his tweets mocking a survivor of the Parkland, Florida, school shooting.

Nick Isgro now must face a recall vote in Waterville, where he was elected to a second term last November. Isgro's tweet in early April was directed at David Hogg, who gained prominence as a gun control advocate after the shooting that left 17 people dead.

MIAMI (AP) — A survivor of a mass shooting that killed 17 at a Florida high school in February is calling for a boycott of two of what he says are the biggest investors in gun manufacturers: BlackRock and The Vanguard Group.

Both companies said in statements Wednesday that they offer clients opportunities to select funds that do not include gun manufacturers.

WATERVILLE, Maine (AP) — A Maine Republican mayor who was ousted from his position at a bank for tweets criticizing a Parkland, Florida, high school shooting survivor has lashed out at reporters during his first public appearance since the incident.

The Morning Sentinel reports some Waterville officials are calling for Republican Mayor Nick Isgro to resign. Isgro wrote in a tweet this week that Parkland student David Hogg should "eat it."