Holder: Expect more NC lawsuits in next redistricting round

IOWA CITY, Iowa (AP) — Tyson Foods has fired seven top managers at its largest pork plant after an independent investigation confirmed allegations that they bet on how many workers would test...

IOWA CITY, Iowa (AP) — Tyson Foods suspended top officials at its largest pork plant on Thursday and launched an investigation into allegations that they bet on how many workers would get infected...

How a chance reunion led to Nipsey Hussle’s death

LOS ANGELES (AP) — Ermias Asghedom and Eric Holder both grew up in the same Los Angeles neighborhood, were both part of the gang known as the Rollin' 60s, and were both aspiring rappers. Asghedom,...

Microsoft said Friday it is pulling its investments from a facial-recognition startup that scans faces at Israeli military checkpoints, even though the tech giant couldn't substantiate claims that...

By The Associated PressNovember 16, 2019 GMT

MONTGOMERY, Ala. (AP) — African Americans make up more than a quarter of Alabama's voting age population.

But only one of the state's seven congressional districts is majority black.

Mississippi: Election lawsuit is not about voting rights

JACKSON, Miss. (AP) — Attorneys defending Mississippi say a lawsuit that challenges the state's system of choosing a governor is about "partisan politics," not about protecting African Americans'...

NEW YORK (AP) — When Najibullah Zazi pleaded guilty to being the ringleader in a foiled plot to bomb New York City's subway system, U.S. Attorney General Eric Holder said he was responsible for...

MADISON, Wis. (AP) — Former Wisconsin Gov. Scott Walker is joining a Republican group to be the lead fundraiser for its work preparing for the next round of redistricting.

Holder, a Democrat, said in a Monday opinion piece in The Washington Post that he'll focus...

DES MOINES, Iowa (AP) — Former Attorney Gen. Eric Holder said Tuesday he is in the final stages of deciding whether to seek the 2020 Democratic nomination for president and plans to decide in about a month.

"I'm going to sit down with my family very soon and decide whether this is something we're going to seek," Holder told reporters after headlining a voting rights forum at Drake University in Des Moines, Iowa.

RICHMOND, Va. (AP) — When Sharyl Attkisson first began hearing clicking sounds on her phone and her computers started turning on and off in the middle of the night, she thought it was a technical glitch that could be easily fixed.

Attkisson, then a longtime investigative reporter for CBS News, didn't suspect anything more until her sources in the intelligence community suggested that the government might be spying on her because of critical stories she had done.

Assembly Speaker Craig Coughlin and Senate President Steve Sweeney canceled Monday's vote on the proposed constitutional amendment, which if approved by voters next year, would have overhauled how New Jersey draws its 40 legislative districts.

The fight over restricting early voting in Wisconsin is back in federal court.

Attorneys for a coalition of liberal groups asked a federal judge Monday to block enforcement of a law change signed by Gov. Scott Walker on Friday that would limit early voting to no more than two weeks before an election.

MADISON, Wis. (AP) — Wisconsin Gov. Scott Walker signed a sweeping package of Republican legislation Friday that restricts early voting and weakens the incoming Democratic governor and attorney general, brushing aside complaints that he is enabling a brazen power grab and ignoring the will of voters.

The Republican governor signed it Friday after the Legislature passed it in a lame-duck session last week.

COLUMBUS, Ohio (AP) — President Donald Trump tried to provide a late boost to Republicans in Ohio Monday on the last full day of campaigning before voters select a new governor as well as decide a U.S. Senate race and some closely contested congressional seats.

Voters also will decide a constitutional amendment Tuesday that proposes reducing sentences for possession of certain drugs, among other measures.

LAS VEGAS (AP) — Battleground races for U.S. Senate, U.S. House and governor will make Nevada voters Tuesday a key decider of power in Congress and the state's political landscape for a decade.

LAS VEGAS (AP) — A Republican from a political dynasty and a powerful Las Vegas-area politician hoping to become Nevada's first Democratic governor in two decades are in a tight race for the state's top office Tuesday.

Like many races in the battleground state of 3 million people, the contest between Republican Adam Laxalt and Democrat Steve Sisolak is close, and the stakes are high. 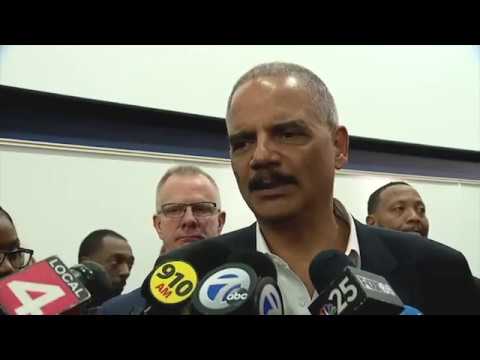 Obama to campaign for Michigan Democrats on Friday

Obama will headline a rally in Detroit Friday for Sen. Debbie Stabenow, gubernatorial candidate Gretchen Whitmer, U.S. House candidates and others 11 days before the election.

Former U.S. Attorney General Eric Holder will also attend. He leads a national Democratic group that is backing Michigan's anti-gerrymandering ballot proposal to put redistricting in the hands of a commission instead of lawmakers.

Sisolak's campaign announced the endorsement Wednesday with a statement from Biden calling the candidate "my kind of candidate."

Biden says Sisolak came from a blue-collar background, knows the challenges of raising a family as a single father and will protect families.

Control of Congress also at stake in state legislative races

JEFFERSON CITY, Mo. (AP) — Democrats looking to regain a foothold in state capitols largely led by Republicans had anticipated flipping control of up to a dozen legislative chambers during the last presidential election. It didn't work out that way.

MADISON, Wis. (AP) — Gov. Scott Walker is attacking his Democratic opponent over his support from labor unions, the day after a poll showed Tony Evers is slightly ahead in the race.

The Walker tweets against Evers comes as former Virginia Gov. Terry McAuliffe was to campaign with Evers in Madison on Wednesday. On Tuesday, Evers was joined in Milwaukee by former U.S. Attorney General Eric Holder.

LANSING, Mich. (AP) — A national Democratic redistricting group led by former U.S. Attorney General Eric Holder on Wednesday announced a $250,000 donation to bolster a Michigan ballot proposal that would empower a commission to draw congressional and legislative maps instead of the Legislature.

LAS VEGAS (AP) — An anonymous New York Times opinion piece criticizing President Donald Trump is "alarming" but "consistent with what we have seen in previous books, in previous stories about the dysfunction of this administration," former U.S. Attorney General Eric Holder said in Las Vegas on Thursday.

Holder is visiting as chairman of the National Democratic Redistricting Committee. The committee backed by former President Barack Obama is investing millions of dollars in state-level elections in 11 states. Its heaviest focus is on Ohio.

Holder at MLK event: Age of bullies, bigots not fully over

MEMPHIS, Tenn. (AP) — Despite advances the country has made since the Rev. Martin Luther King. Jr. was slain while fighting poverty and racism, "the age of bullies and bigots is not fully behind us," former U.S. Attorney General Eric Holder said Monday.

The remark was one of two thinly veiled references to President Donald Trump that Holder made during his appearance at a symposium on the first of three days of events commemorating the 50th anniversary of King's assassination.