Q&A: Clooney on ‘Midnight Sky’ and his twilight as an actor

NEW YORK (AP) — How has George Clooney been handling isolation? Aside from spending time with his wife, Amal Clooney, and their 3-year-old twins, and editing his new film “The Midnight Sky,” he's...

Netflix is on a roll this year, with “Mank,”“Ma Rainey’s Black Bottom,”“Da 5 Bloods” and “The Trial of the Chicago 7” all garnering Oscar buzz. Well, hold onto your spacesuits for the latest —...

Clooney honored by MoMA as actor, director and humanitarian

George Clooney’s co-stars, friends and collaborators gathered virtually to share anecdotes and praise his contributions as actor, director, humanitarian and colleague -- not to mention Sexiest Man...

People magazine reveals its ’2020 People of the Year’

George Clooney’s secret to cutting his hair, as seen on TV

LOS ANGELES (AP) — George Clooney is just like us, maybe. The star said he does his own haircuts with a device famously touted in infomercials.

The organization said Friday that Andrews will receive the award at the Gala Tribute...

JUBA, South Sudan (AP) — The largest multinational oil consortium in South Sudan is "proactively participating in the destruction" of the country, the actor George Clooney and co-founder of The...

Brad Pitt asks astronaut: Who was better? Clooney or me?

The legacy of Denzel: Key moments from Washington AFI honors

LOS ANGELES (AP) — A night dedicated to an artist as prolific as Denzel Washington is bound to be an emotional one. The Oscar-winning actor, director, and producer is the face of some of the...

BANGKOK (AP) — Thai police said they have arrested an Italian man wanted in his home country after he fled a jail sentence handed down for fraudulently using the name of actor George Clooney to...

Clooney hopes media will be ‘kinder’ to Meghan the mom

LOS ANGELES (AP) — George Clooney is hoping the media will be gentler to Meghan, the Duchess of Sussex, after she gave birth to a baby boy.

"I think people should be a little kinder. She's a...

LONDON (AP) — The Latest on the royal baby (all times local):

Prince Harry and Meghan have named their son Archie.

KUALA LUMPUR, Malaysia (AP) — Brunei's sultan has said a moratorium on capital punishment is in effect for new Shariah criminal laws including stoning people for gay sex and adultery that sparked...

UNITED NATIONS (AP) — Human rights lawyer Amal Clooney said Tuesday she is requesting the transfer of a female member of the Islamic State extremist group to face justice for crimes against women...

UNITED NATIONS (AP) — Human rights lawyer Amal Clooney on Tuesday demanded justice for victims of an "epidemic of sexual violence" in conflicts, especially rapes and other abuses perpetrated by...

LONDON (AP) — Dozens of people protested in London on Saturday against new Islamic laws in Brunei that punish gay sex and adultery by stoning offenders to death, while the University of Oxford...

George Clooney calls for boycott of hotels over anti-gay law

LOS ANGELES (AP) — George Clooney is calling for the boycott of nine hotels in the U.S. and Europe with ties to the sultan of Brunei, which next month will implement Islamic criminal laws to... 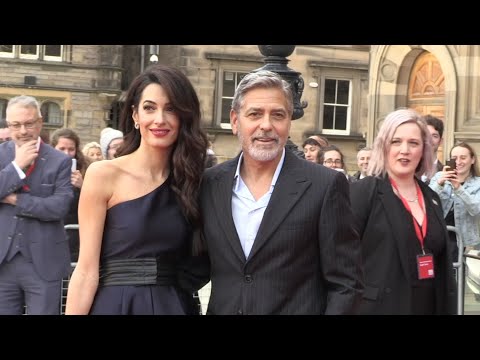 LOS ANGELES (AP) — George Clooney is frustrated by the way the media is treating Meghan, the Duchess of Sussex, comparing it to how the media covered Princess Diana.

Clooney told reporters the Meghan is "a woman who is seven months pregnant and she has been pursued and vilified and chased in the same way that Diana was and it's history repeating itself."

Diana died in a car crash while being pursued by paparazzi in 1997.

PASADENA, Calif. (AP) — George Clooney says he never expected his next project to be a miniseries based on a novel he read in high school.

But against his initial inclination, he's directing and starring in Hulu's series "Catch-22," drawn from Joseph Heller's classic work about the insanity of war. The streaming service Hulu will release it this spring.

FORT LAUDERDALE, Fla. (AP) — They rallied hundreds of thousands to march for gun reform, landed on the cover of Time magazine and raised millions of dollars from celebrities like Oprah and George Clooney. But could the teenage survivors of the Parkland school shooting actually motivate unpredictable young voters to cast their ballots?

"I'm not sure if you've heard, but I've been on this hope kick for a while now. Even ran a couple of campaigns on it. Thank you for officially validating my hope credentials," Obama said during his remarks.

LOS ANGELES (AP) — The American Film Institute is honoring Denzel Washington with a Life Achievement Award. The organization said Friday that Washington will receive the award at a Gala Tribute on June 6 in Los Angeles. It will be broadcast on TNT.

Actress in ‘ER,’ ‘Stand and Deliver’ fatally shot by police

LOS ANGELES (AP) — An actress who appeared on the TV medical drama "ER" and starred in the film "Stand and Deliver" was fatally shot by police officers in Southern California after they say she pointed a replica handgun at them.

Vanessa Marquez, who gained attention last year when she said George Clooney helped blacklist her from Hollywood, died at a hospital following Thursday's shooting at her apartment in South Pasadena, just outside Los Angeles.

LOS ANGELES (AP) — George Clooney can raise a glass, even if he's not starring in any hit movies.

Feds: Man posed as a prince to get explicit photos from boys

PHILADELPHIA (AP) — A Philadelphia man pretended to be a prince in an elaborate catfishing scheme to get young boys to send him explicit photographs of themselves, according to federal authorities.

ROME (AP) — The driver of a station wagon hit by George Clooney's scooter in Italy says he was waiting to turn when a scooter whizzed by, then the actor's slammed into him.

Italian news agency ANSA, reporting Wednesday from Sardinia, quoted Antonello Viglino as saying he was "stationary on the roadway," ready to turn left when two motorcycles came from the other direction Tuesday morning.

Viglino, 67, says the first "avoided collision" but the second "slammed into me."

OLBIA, Sardinia (AP) — Actor George Clooney slammed his motorbike into an oncoming car that turned suddenly into his lane Tuesday and was thrown several meters (yards) in the air on the Italian island of Sardinia, according to video of the crash.

"He is recovering at his home and will be fine," Clooney spokesman Stan Rosenfield told The Associated Press in an email.

LOS ANGELES (AP) — George Clooney, this is your life.

The American Film Institute hosted a star-studded gala earlier this month to honor the Oscar-winner's achievements as an actor, director and activist. The evening kicked off with a video message from former President Barack Obama, and featured speeches from Julianna Margulies reflecting on their days together on "ER," Bill Murray recounting pranks on the set of "Monuments Men" and Miley Cyrus performing a song from "O Brother, Where Art Thou?"

LOS ANGELES (AP) — George Clooney's Hollywood career spans more than three decades, with memorable roles including fighting vampires, playing Batman and drifting through space in "Gravity." But Clooney's other accomplishments, including directing, screenwriting and activism, led to him becoming the latest recipient of the American Film Institute's Life Achievement Award.

Clooney: Twins are my greatest achievement

Clooney’s royal wedding: ‘There was no beer pong’

LOS ANGELES (AP) — Julia Roberts is stepping out to present her longtime friend and frequent co-star George Clooney with one of the highest honors in film.

The American Film Institute says Wednesday that Roberts will be on hand to give Clooney the 46th AFI Life Achievement Award at a gala to be held at the Dolby Theatre on June 7.

Like every good royal wedding, it was all about the hats, the dresses and the posh tails, with some fashion standouts among the guests at Windsor Castle.

Amal Clooney was undeniably regal in a mustard yellow Stella McCartney dress with cap sleeves and a long tie in back that bordered on a train as she glided into St. George's Chapel on Saturday for the wedding of Prince Harry and Meghan Markle. Her actor husband, George Clooney, was at her side in subtle grey and a pale yellow stripe tie.

PHILADELPHIA (AP) — Jay Wright had some time to chat before he met with Michelle Obama. The former first lady was in Philadelphia for an education event and Wright was invited to give a speech. Wright and the Obamas go way back — to at least 2016 when President Barack Obama teased Villanova's coach as "the George Clooney of coaches" for his GQ style while winning a national title.

JUBA, South Sudan (AP) — South Sudan's state-owned oil company has been "captured by predatory elites" and is being used to fund the country's civil war, including a government-aligned militia accused of human rights abuses, according reports by two investigative organizations.

Millions of dollars in oil revenue are being funneled from Nile Petroleum into the nation's national security service, footing the bill for the war, now in its fifth year, says Global Witness, in a report released Tuesday.

George and Amal Clooney donate $500k to march against guns

PASADENA, Calif. (AP) — George Clooney is directing and starring in a TV series version of the novel "Catch-22."

Streaming service Hulu said Sunday that the six-part series based on Joseph Heller's anti-war satire will go into production in 2018. A debut date and other cast members weren't announced.

Clooney will play Col. Cathcart in the drama he's directing with his Smokehouse Pictures partner, Grant Heslov. Smokehouse is producing it with Paramount Television and Anonymous Content.