PROVO, Utah (AP) — A woman is suing a Utah youth treatment facility that she said punished her after she accused a male staff member of a sexual assault while she was a minor.

BOSTON (AP) — A former Boston firefighter who said she was sexually harassed by male colleagues while on the job, then denied a better position as retaliation for reporting the harassment, has...

LONDON (AP) — A yellow school bus with a banner depicting the face of Britain's Prince Andrew drove past Buckingham Palace on Friday, urging him to testify in the investigation of the late sex...

LOS ANGELES (AP) — Four teachers from a Los Angeles-area school sued Delta Air Lines on Friday, saying they were exposed to jet fuel when a plane with engine trouble dumped its fuel over a densely...

LOS ANGELES (AP) — Billionaire Alki David was hit with more than $58 million in damages after a jury found him liable for battery, sexual battery and sexual harassment against a former employee in...

Another woman accuses Epstein of abuse, sues his estate

NEW YORK (AP) — A woman who says she suffered lasting damage from sexual abuse by Jeffrey Epstein when she was 17 years old sued his estate on Thursday, joining other women who are speaking...

The Latest: Allred: Prince should speak to FBI about Epstein

LOS ANGELES (AP) — The Latest on Prince Andrew’s efforts to distance himself from Jeffrey Epstein sex scandal (all times local):

North Dakota man involved in gruesome killing back in court

FARGO, N.D. (AP) — A man originally sent to prison for life for helping to cover up the death of a North Dakota woman whose baby was cut from her womb is set to receive a new...

U.S. Supreme Court Justice Sonia Sotomayor, actress Jane Fonda and attorney Gloria Allred were among the inductees at the National Women's Hall of Fame on Saturday.

PARIS (AP) — Lawyers have issued very different takes on a formal meeting in Paris that was supposed to take place Tuesday between an alleged rape victim and American singer-songwriter Chris...

NEW YORK (AP) — A man who said he was cleaning out an old videotape collection found what he thought was a recording of R&B singer R. Kelly in concert, but instead turned out to show a man who...

The Latest: Lawyer: R. Kelly denies being on tape with girls

An attorney representing R. Kelly says the R&B artist denies being on yet another videotape that allegedly...

NEW YORK (AP) — Supreme Court Justice Sonia Sotomayor, actress Jane Fonda and attorney Gloria Allred are being inducted into the National Women's Hall of Fame. They are among 10 members of the...

NEW YORK (AP) — Two women said Thursday that singer R. Kelly picked them out of a crowd at a Baltimore after-party in the mid-1990s when they were underage and had sex with one of the teens...

CHICAGO (AP) — Attorney Gloria Allred told The Associated Press Friday she has contacted law enforcement about concerns one of her clients may be the person in a VHS tape recently given to Chicago prosecutors that purportedly shows R&B star R. Kelly having sex with an underage girl.

Bill would drop time limits for prosecuting, suing over rape

COLUMBUS, Ohio (AP) — Some Democratic state lawmakers want Ohio to eliminate time limits on when people can be charged with or sued over rape or attempted rape.

Sen. Joe Schiavoni (shuh-VOHN'-ee), of Boardman, announced a bill Wednesday that would lift the statute of limitations that currently allows for charges within 25 years of a rape or civil litigation within two years.

Schiavoni says there shouldn't be a clock on survivors seeking justice in such cases.

NEW YORK (AP) — Four contestants in this year's Mrs. America pageant on Monday called for the pageant's CEO to apologize over accusations he used racial slurs and stereotypes in a conversation at a contest-related event.

The four women, three African-American and one white, spoke at a news conference in Manhattan with lawyer Gloria Allred, accusing David Marmel of using racially biased language in Las Vegas in August. 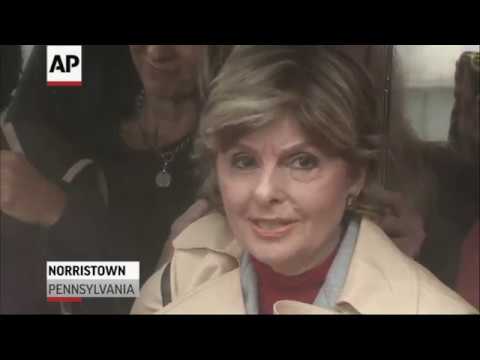 Cosby accusers say they hope he is sentenced to jail time

PHILADELPHIA (AP) — Two of the women who have accused Bill Cosby of sexual assault decades ago said Sunday they hope he will be sentenced to prison time this week.

Lise-Lotte Lublin and Chelan Lasha, who appeared with attorney Gloria Allred, also said they hoped they would be allowed to read victim impact statements before Cosby is sentenced on three felony counts of aggravated indecent assault .

NEW YORK (AP) — The Latest on the arraignment for Harvey Weinstein on charges that he committed a sex crime against a third woman (all times local):

A lawyer for the third alleged sex crime victim in the prosecution against Harvey Weinstein says her client will testify if the case goes to trial.

Gloria Allred said outside court Monday that she doubts Weinstein's lawyer would allow him to do the same because it would subject him to cross-examination by prosecutors.

NEW YORK (AP) — A former NFL cheerleader for the Houston Texans accused the team on Friday of abusing her by forcing her to wear duct-tape on the sides of her waist to make her look thinner in a case of what she called "body shaming."

Angelina Rosa made the claim while joining a lawsuit filed earlier this month by five other former Texans cheerleaders. The suit alleges they were underpaid and subjected to a hostile work environment.

LAS VEGAS (AP) — A former Nevada political consultant who worked on Republican campaigns in several states has pleaded not guilty to a misdemeanor domestic battery charge.

Benjamin Sparks did not appear in a Las Vegas courtroom Tuesday for his arraignment but his attorney Josh Tomsheck entered a plea on his behalf.

Prosecutors say Sparks grabbed or pushed his ex-girlfriend in March at their home.

LAS VEGAS (AP) — The ex-girlfriend of a former Nevada political consultant facing allegations of domestic violence says she has permanent vision damage after he struck her in the eye.

Former GOP consultant Benjamin Sparks is due in a Las Vegas courtroom Tuesday to answer to a misdemeanor battery charge after prosecutors say he grabbed or pushed the woman in March.

Sparks does not yet have a listed attorney and did not answer a phone call seeking comment Monday.

A Bill Cosby accuser's lawyer says the defense is trying to smear the woman by bringing up her criminal past.

Attorney Gloria Allred said Monday that Chelan Lasha's 2007 guilty plea for a false report to law enforcement is irrelevant to Cosby's case and has nothing to do with the comedian, who's on trial in suburban Philadelphia and denies drugging and molesting another woman.

The Sundance Film Festival has always been a place for boundary-pushing programming, but from the Me Too movement, to diversity and representation in film and even the current presidency, this year the snowy mountain town of Park City, Utah, is primed to be an epicenter of conversation around some of the most burning issues of the day.

MONTGOMERY, Ala. (AP) — A woman who has accused Republican Roy Moore of sexual assault reaffirmed that he inscribed her yearbook when she was a teenager and said she added a notation marking the date and place where the signing occurred.

The yearbook inscription has been presented as a key piece of evidence that the Republican Senate candidate knew Beverly Nelson. Nelson has accused Moore of assaulting her when she was 16 and he was 34.

BIRMINGHAM, Ala. (AP) — The Latest on the Alabama race for U.S. Senate. (all times local):

A woman who has accused Republican Roy Moore of sexual assault reaffirmed that he inscribed her yearbook when she was a teenager and said she added a notation marking the date and place where the signing occurred.

NEW YORK (AP) — The Latest on a defamation lawsuit filed against President Donald Trump by a former contestant on "The Apprentice" (all times local):

A former cast member of the reality TV show "The Apprentice" who has accused Donald Trump of unwanted sexual contact and has filed a New York defamation lawsuit against him has thanked her lawyers and says the case should go forward.

LOS ANGELES (AP) — Documentaries about Robin Williams, Gloria Allred and Ruth Bader Ginsberg, a Lizzie Borden film with Kristen Stewart and Debra Granik's long-awaited follow up to "Winter's Bone" are among the 110 features set to premiere at the 2018 Sundance Film Festival.

Senate candidate Roy Moore of Alabama says the latest accusation against him of sexual misconduct is "absolutely false."

Standing by his wife at a hastily called news conference, Moore says he did not know Beverly Young Nelson and "never did what she said I did."

Nelson said Monday that Moore assaulted her in the late 1970s when she was a 16-year-old waitress.

The actress added that "this will be the end of it if we decide that's what we want" before being honored at the Women's Media Center Awards in New York on Thursday.

In a press conference Tuesday in New York held by attorney Gloria Allred, Mimi Haleyi claimed Weinstein forcibly performed oral sex on her in 2006. Haleyi was in her 20s at the time, Allred said.

In graphic detail, Haleyi described Weinstein holding her down at his New York apartment in what she said appeared to be a child's bedroom.