Review: Guy Ritchie’s ‘The Gentlemen’ is stale pint of ale

Guy Ritchie’s honor-among-thieves meta-caper “The Gentlemen,” with Matthew McConaughey, has all the tailored tweed suits and smoky atmosphere of a handsome scotch commercial. “The Gentlemen” might...

LOS ANGELES (AP) — Moviegoers voted with their dollars and chose the familiar over the new this Memorial Day weekend. The Walt Disney Co.'s live-action remake of "Aladdin" crushed the competition...

Review: Smith’s fine in ‘Aladdin.’ Another guy’s the problem

It's pretty clear after watching the new live-action "Aladdin" that doubts about Will Smith's casting as the Genie are overblown. It's the guy behind the camera who should be doubted. And stuffed...

Recreating ‘Aladdin’s’ magic with Will Smith and fresh faces

LOS ANGELES (AP) — In 1992, Disney transported audiences to the mythical land of Agrabah, where they met a street rat with a heart of gold, a flying carpet, a headstrong princess and a magical... 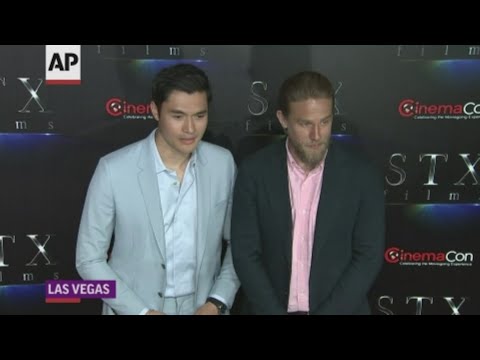 The star on Wednesday revealed the live-action musical's first poster. Looking similar to the 1992 Robin Williams film, the poster features an ornate lamp and blue smoke along with the words: "Choose wisely." The film's release date of May 2019 also is listed.

The studio said Monday that Robert Downey Jr. will reprise his role as Sir Arthur Conan Doyle's famed detective alongside Jude Law as his counterpart Watson.

Studio estimates on Sunday say director Guy Ritchie's "King Arthur: Legend of the Sword" opened to a bleak $14.7 million from more than 3,700 locations against a costly $175 million production budget.

The gritty reimaging of the Excalibur myth starring Charlie Hunnam as Arthur debuted in third place behind box office leader "Guardians of the Galaxy Vol. 2" and "Snatched" at No. 2.

How Charlie Hunnam talked his way into being King Arthur

NEW YORK (AP) — Charlie Hunnam says he convinced director Guy Ritchie to cast him as King Arthur after the two bonded over marijuana — talking about it, not indulging in it.

How Charlie Hunnam talked his way into being King Arthur

Deep into Guy Ritchie's "King Arthur: Legend of the Sword ," a bad guy who we've never met before informs Arthur (Charlie Hunnam) and his mates that they'd better be at the castle before dark if they want to see "the boy" and "the girl" again. It's one of those harmless, up the stakes clichés that's all too common in action movies, but, in the flawed yet amusing "King Arthur," it unwittingly left me baffled. "Which girl?" I wondered, sincerely doubting that this was the intended effect.

LOS ANGELES (AP) — Madonna says she is supporting son Rocco Ritchie after reports surfaced Wednesday that the 16-year-old was arrested for possession of marijuana in London.

Madonna released a statement to The Associated Press Wednesday calling the September arrest "a family matter."

She said: "I love my son very much. I will do whatever I can to give him the support that he needs, and I ask that you respect our privacy at this time."

NEW YORK (AP) — Madonna and Guy Ritchie have resolved a months-long custody dispute in New York over where their teenage son should live.