An explosion of homeless people on America’s West Coast is pushing cities and towns to the brink. The Associated Press deployed a team of journalists to chronicle the crisis, find explanations and identify potential solutions.

Amid booming economy, homelessness soars on US West Coast

SEATTLE (AP) — In a park in the middle of a leafy, bohemian neighborhood where homes list for close to $1 million, a tractor's massive claw scooped up the refuse of the homeless - mattresses, tents, wooden frames, a wicker chair, an outdoor propane heater. Workers in masks and steel-shanked boots plucked used needles and mounds of waste from the underbrush.

BEHIND THEIR EYES: AP PHOTO ESSAY BY JAE HONG
ADVERTISEMENT

SAN DIEGO (AP) — Christine Wade found a haven in the tent she shared with six children, pitched in an asphalt parking lot.

It was, at least, far better than their previous home in the city, a shelter where rats ate through the family's bags of clothes and chewed on 2-year-old Jaymason's stroller. Roughly 50 of the encampment's 200 residents were children, so Wade's kids had plenty of playmates.

EVERETT, Wash. (AP) — This is the lesson that the working-class city of Everett has learned: It takes a community to rescue the hardcore homeless.

It takes teams of outreach workers — building relationships with men and women struggling with addiction or untreated mental illness, prodding them to get help. It takes police and other agencies, working together to provide for their needs.

Path to photographing homeless began in shock then curiosity

LOS ANGELES (AP) — I was drawn to document life on Skid Row after being repulsed by it.

Initially, it wasn't to bring awareness to the plight of the people there or to give voice to the homeless. It was more of a visual curiosity.

Tents were dwarfed by skyscrapers. People were shooting heroin and smoking crack in broad daylight. A mentally ill woman was screaming and cursing as if seeing a ghost. 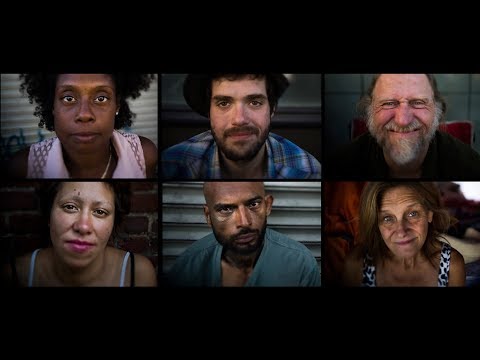 MOUNTAIN VIEW, Calif. (AP) — In the same affluent, suburban city where Google built its headquarters, Tes Saldana lives in a crowded but tidy camper she parks on the street.

She concedes it’s “not a very nice living situation,” but it also is not unusual. Until authorities told them to move, more than a dozen other RVs filled with people who can’t afford rent joined Saldana on a tree-lined street in Mountain View, parked between a Target and a luxury apartment complex.

NEW YORK (AP) — It's before dawn when two outreach workers find a homeless man known as Juice near a train station in Harlem. A nurse will be visiting to discuss his heart problems, they tell him.

A short time later, in Marcus Garvey Park, the sun has just begun to rise when the caseworkers approach a man zipped inside a sleeping bag. They have encountered him before; they know he's teasing when he gives a phony name.

ANAHEIM, Calif. (AP) — Mohammed Aly does not see any reason why he shouldn't try to ease the lives of Orange County's homeless. But the authorities — and many of his neighbors — disagree.

Aly, a 28-year-old lawyer and activist, has been arrested three times as he campaigned on behalf of street people. Recently, he was denied permission to install portable toilets on a dried-up riverbed, site of an encampment of roughly 400 homeless.

Solutions to homelessness come with their own challenges

Many experts say homelessness is not an intractable problem.

A national focus on housing veterans and people who have long been homeless has made a difference, for example. But methods to end it or significantly reduce the problem come with financial and political hurdles. A look at some of the key strategies and their challenges:

By The Associated PressDecember 28, 2017 GMT

The following links provide information about many homeless service providers in West Coast cities and regions with major homeless populations. The links are to government-affiliated services or policy coordinating agencies.

By The Associated PressDecember 7, 2017 GMT

Homelessness has reached unprecedented proportions on America's West Coast, causing the national homeless population to increase this year for the first time since 2010. Here's a look at coverage of the crisis from news organizations in the region: