Gulfport police were called to a home just before 2 a.m. after...

AUSTIN, Texas (AP) — A physician with a terminal cancer diagnosis killed a pediatrician and then himself after taking hostages at a doctor's office in Austin, police said Wednesday.

SALEM, Ore. (AP) — Three people are dead and one was seriously injured in a hostage incident in a Salem, Oregon, home, in which a deputy fired gunshots, police said.

SALEM, Ore. (AP) — A possible “hostage situation” led to a fatal shooting after police responded to a home in the west Oregon city of Salem, The Marion County Sheriff’s Office said....

CHICAGO (AP) — An armed man who allegedly fired three shots inside a Chicago apartment building during a reported hostage situation was arrested Thursday following a two-hour standoff with...

CEDAR PARK, Texas (AP) — A 16-hour hostage situation and exchange of gunfire that left three police officers injured ended calmly Monday morning when a man and his mother walked out of a home near...

JOHANNESBURG (AP) — Five people are dead and more than 40 have been arrested after an early-morning hostage situation at a long-troubled church near Johannesburg, police in South Africa said...

Arkansas boy, 11, dies after being shot in hostage situation

LITTLE ROCK, Arkansas (AP) — An 11-year-old boy who was shot after being taken hostage by his father in Arkansas has died, authorities said Saturday.

NEWPORT, Vt. (AP) — An apparent hostage situation in one of Vermont's prisons was resolved without injury, the Department of Corrections said Wednesday.

CLEVELAND (AP) — A teenager who planned to set off an explosive device at an Ohio high school and called police about a hoax hostage situation at a Kansas elementary school has been indicted on...

SPARKS, Nev. (AP) — A man who was a suspect in what was reported as a kidnapping and hostage situation was fatally shot by Sparks and Reno police officers, police said.

SAGINAW, Mich. (AP) — Police on Tuesday identified a man whom officers shot and killed after he stabbed a police dog in the head during a hostage situation.

SAGINAW, Mich. (AP) — Police officers fatally shot a man who stabbed a police dog in the head during a hostage situation at a home in a mid-Michigan city, law enforcement officials...

FULTON, Miss. (AP) — For 32 hours, 10-year-old Mikylah Blackburn was held hostage over a year ago by the man who authorities said killed her father. She has now been recognized for using her...

BRIGHTON, Colo. (AP) — An investigation is underway after a fatal officer-involved shooting that followed a hostage situation north of Denver.

CHICAGO (AP) — An appellate court has overturned a lower court and found a correctional officer who unshackled an inmate at a suburban Chicago hospital can't be sued by two patients who alleged an...

CHARLESTON, W.Va. (AP) — Authorities in West Virginia say a couple was hallucinating while smoking methamphetamine when they falsely reported a hostage situation.

SHARONVILLE, Ohio (AP) — Police say an armed man accused of holding his adult daughter against her will has been shot and injured by a police officer.

BEVERLY HILLS, Calif. (AP) — RZA (RIHZ'-uh) of the Wu-Tang Clan says he's concerned over what he calls a hostage situation for fellow rapper A$AP Rocky, who's charged with assault in...

JOLIET, Ill. (AP) — Authorities say a second person has died following a shootout when police responded to a hostage situation at a burning home in suburban Chicago.

JOLIET, Ill. (AP) — Authorities say a suburban Chicago officer fatally shot a person who fired at police during a hostage situation at a home that was on fire.

ATLANTA (AP) — A gunman suspected of shooting two Georgia police officers remain barricaded in a home Thursday with a teenager who was considered a hostage, police said.

AURORA, Colo. (AP) — Authorities say police in the Denver suburb of Aurora have shot and killed a machete-wielding man in what may have been a hostage situation.

The Latest: Man who took hostages at UPS facility is dead

New Jersey's attorney general says the armed man who burst into a UPS facility and took two female workers hostage was shot and killed by police after he exited the building with both women.

Gurbir S. Grewal's office says in a statement the man has been identified as 39-year-old William Owens, of Sicklerville, New Jersey.

BUCKEYE, Ariz. (AP) — The Arizona Department of Corrections says a hostage situation between an inmate and an employee in a prison library was resolved without injury.

Nurse held hostage by armed inmate will get $7.2M settlement

GENEVA, Ill. (AP) — A suburban Chicago nurse who was held hostage and raped by a hospitalized jail inmate will receive $7.2 million in a settlement.

Four nurses with Northwestern Medicine Delnor Hospital sued Kane County over the hostage situation that unfolded in May 2017 when 21-year-old Tywon Salters overpowered a deputy in the Geneva hospital and took his handgun.

NYPD has a new fleet of 14 drones 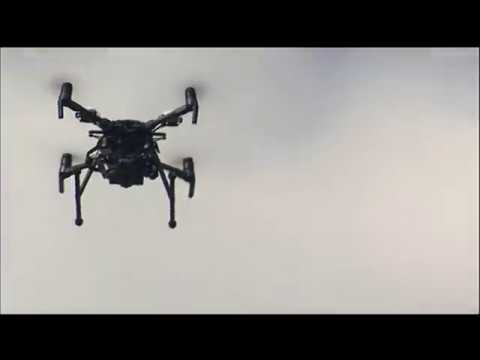 VANCOUVER, Wash. (AP) — Authorities say deputies arrested a man after they say he held people hostage in a vehicle in a Vancouver Walmart parking lot and then caused the store to go into lockdown when he fled.

KOMO-TV reports deputies responded to a report of a hostage situation at about 11:15 a.m. Friday.

Man wanted on a warrant arrested at Clovis apartment complex

CLOVIS, N.M. (AP) — Authorities say a man wanted on a warrant has been arrested in Clovis after authorities responded to reports that he was holding a woman hostage.

He's been booked into jail on an outstanding warrant for resisting, evading or obstructing an officer.

The Latest: Hostage-taker in Germany in critical condition

Cologne police say on Twitter that a hostage-taker has suffered life-threatening injuries when police stormed a pharmacy inside the city's train station.

FORT SMITH, Ark. (AP) — Authorities in western Arkansas say a police officer has fatally shot a 27-year-old man who allegedly threatened another person with a knife during a domestic disturbance.

The Fort Smith Police Department identified the man who died in Saturday's shooting as Samuel Morris.

Authorities say the shooting occurred at an apartment complex where officers responded to reports of a domestic disturbance in which someone was threatened at knife point.

NORFOLK, Va. (AP) — Norfolk police say a man who held a woman and three young children hostage has been charged with abduction after a standoff that ended peacefully.

Police said in a news release Sunday that officers responded to a 911 call Saturday night reporting the hostage situation at a home. The caller told police 33-year-old Johnathan D. Harris was refusing to let his three children and a 54-year-old woman leave and had made threatening comments toward them.

Suspect in custody after hostage situation near Tacoma

TACOMA, Wash. (AP) — Police say an armed man was shot and taken into custody in what may have been a robbery gone wrong near Tacoma.

The Pierce County Sheriff's Office said on Twitter at about 10 p.m. Thursday that the suspect was in custody after exchanging gunfire with deputies at Sky Motors Inc. in Parkland.

The sheriff's office says the man was wearing body armor and was hit in the vest by a round fired by deputies.

Police: Man who held toddler hostage had history of violence

SILVER SPRING, Md. (AP) — Authorities say a Maryland man who was fatally shot by police this week during a hostage situation had a history of domestic violence.

The robber entered a branch of the Banorte bank in Hermosillo in Sonora state Monday morning and took four women hostage with a knife.

Hermosillo police said in a statement that hours later a police tactical team convinced the suspect to open the door with the idea of releasing the hostages. But the suspect resisted releasing them and was shot.

JOHANNESBURG (AP) — Al-Qaida's North Africa branch has freed a South African man who was held hostage for six years in Mali and he is now home, South Africa's government announced Thursday, denying it had paid any ransom.