Mnuchin says he was unaware of IRS memo on tax returns

WASHINGTON (AP) — Treasury Secretary Steven Mnuchin said Wednesday he has no idea who wrote a confidential Internal Revenue Service legal memo that says that tax returns must be given to Congress...

LAS VEGAS (AP) — A federal jury in Las Vegas has found a former Internal Revenue Service employee guilty of evading taxes for more than 20 years and obstructing tax agents who tried to...

TUCSON, Ariz. (AP) — The Internal Revenue Service says an Arizona tax preparer has been charged with conspiracy and aiding and assisting in false statements included in tax returns.

Satanic Temple: IRS has designated it a tax-exempt church

SALEM, Mass. (AP) — The Satanic Temple says it's been designated a church by the Internal Revenue Service.

The Salem, Massachusetts-based organization provided The Associated Press with a...

HELENA, Mont. (AP) — Attorneys for Montana and New Jersey are asking a federal judge to rule on their dark-money lawsuit against the Internal Revenue Service and the Treasury Department without a...

EUREKA, Kan. (AP) — When Roger and Marcia Altis' family business didn't quite work out as planned — especially after Roger's first heart attack — they decided to file for bankruptcy.

WASHINGTON (AP) — The head of the IRS, who is overseeing the most sweeping overhaul of the U.S. tax code in three decades, says the $2,833 average refund in this year's tax-filing season worked...

MOUNT VERNON, Ind. (AP) — The construction of a $2.8 billion fertilizer plant in southwestern Indiana is still on track following the resolution of a dispute with the Internal Revenue Service, the...

CRAWFORD, Miss. (AP) — A Mississippi town has agreed to pay tax lien of more than $30,000 because it improperly managed employee retirement funds.

WASHINGTON (AP) — Disruptions from last month's partial government shutdown caused a "shocking" deterioration in the IRS' telephone help for taxpayers in the first week of the filing season, the agency's watchdog said in a report released Tuesday.

Even with IRS staffers returning, tax refunds may be delayed

WASHINGTON (AP) — The IRS' workforce will return to full strength under the short-term deal to reopen the government struck Friday by President Donald Trump and congressional leaders. But the disruption from the partial shutdown and the recent absence of a large contingent of recalled IRS employees mean the possibility of delayed tax refunds.

Ogden IRS offices calling more than 1,000 back to work

OGDEN, Utah (AP) — Officials say more than 1,000 Internal Revenue Service employees in Ogden are being called back to work to prepare for tax-filing season as the federal government shutdown continues.

The IRS is recalling 46,000 workers to handle tax returns

WASHINGTON (AP) — The Internal Revenue Service is recalling about 46,000 of its employees furloughed by the government shutdown — nearly 60 percent of its workforce — to handle tax returns and pay out refunds. The employees won't be paid during the shutdown. 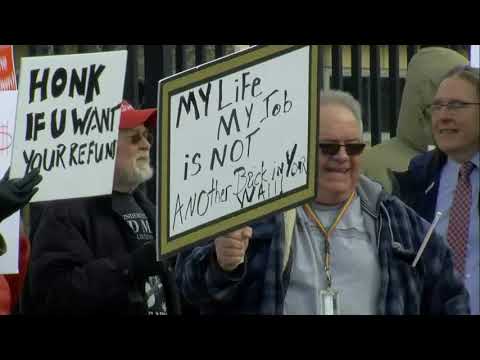 Furloughed IRS workers to rally calling for end to shutdown

OGDEN, Utah (AP) — Furloughed Internal Revenue Service workers in Ogden are planning a rally later this week to call for an end to the partial government shutdown.

The Standard-Examiner in Ogden reports that about 5,000 people who work at the IRS office in Ogden are struggling without pay checks during an impasse that is in its third week.

WASHINGTON (AP) — Taxpayers who are owed refunds will be paid on time, despite the government shutdown that has closed many federal agencies, a Trump administration official said Monday as concern mounted over the risk that the payments could be delayed.

But Nancy Pelosi, D-Calif., expected to lead the House when the new Congress starts in January, said she believes the White House will fight the request, "so the question is where do we go from there."

AUSTIN, Texas (AP) — Two people were hospitalized after a package containing a suspicious substance was delivered to the offices of the Internal Revenue Service in Texas' capital.

The Austin American Statesman reports that a package delivered to the mailroom of the IRS in south Austin and opened Friday contained a white powder.

ATLANTA (AP) — A former employee for the Internal Revenue Service in Atlanta has been sentenced to two years in prison after she pleaded guilty to aggravated identity theft.

The U.S. Justice Department said in a news release that Stephanie Parker worked as a contact representative between September 2012 and March 2013.

WASHINGTON (AP) — Getting President Donald Trump's tax returns is high on the list of Democratic priorities now that they have won the House.

By law, the leaders of tax-writing committees in the House and Senate can obtain tax returns and related information from the Internal Revenue Service. Democrats will control the House panel next year.

The IRS has increased the contribution limits for various retirement accounts for 2019.

The Internal Revenue Service said Thursday that the contribution limit for employees who participate in a 401(k), 403(b) and most 457 plans, as well as the federal government's Thrift Savings Plan, is increased from $18,500 to $19,000.

COLLEGE PARK, Md. (AP) — The Internal Revenue Service has reinstated the tax-exempt status of a nonprofit operated by white nationalist Richard Spencer, who has been banned from using mainstream online platforms to raise money.

Spencer's Alexandria, Virginia-based National Policy Institute Inc. automatically lost its tax-exempt status as a 501(c)(3) nonprofit more than a year ago after it failed to file tax returns for three consecutive years.

Hawley to speak at university chapel, despite IRS guideline

ST. LOUIS (AP) — Missouri's Republican Senate candidate Josh Hawley opposes a federal provision that bars religious organizations from political endorsements, and his upcoming appearance at a Baptist university may provide a test case for the future of the measure.

Hawley, the state's attorney general, is scheduled to speak Wednesday during chapel at Hannibal-LaGrange University, a 900-student college in Hannibal, 115 miles north of St. Louis.

WASHINGTON (AP) — Over the protests of many Democrats, the Senate on Wednesday evening approved President Donald Trump's choice to become the new head of the IRS. Democrats opposed the nomination because of a new Trump administration policy allowing some groups involved in politics to hide their donors' identities.

LOUISVILLE, Ky. (AP) — The Internal Revenue Service says it will audit the University of Louisville Foundation.

The Courier Journal reports the IRS notified the foundation on Aug. 24 it had been selected for an audit. Agents plan to visit the foundation Sept. 11-13 and have asked for documents related to mismanagement and employee pay.

MONTGOMERY, Ala. (AP) — Advocates of a state-supported private school scholarship program are concerned that donations could drop under proposed new Internal Revenue Service rules by reducing the tax break that donors get.

The program, known as the Alabama Accountability Act, gives donors an income tax break for donations to groups that provide private school scholarships for low-income students. The program provided more than 4,000 scholarships in 2016.

ALBANY, N.Y. (AP) — Gov. Andrew Cuomo says time is running out for New Yorkers who want to get around a federal cap on state and local tax deductions by donating to a charitable fund set up by the state.

The Democrat says Monday is the last day for residents to contribute to the Charitable Gifts Trust Fund before new Internal Revenue Service rules take effect.

PHOENIX (AP) — A businessman who sold nail salons and commercial leases in metropolitan Phoenix has been indicted for tax evasion authorities say was conducted more than a decade ago.

HELENA, Mont. (AP) — Montana's governor and the state Department of Revenue filed a lawsuit against the Internal Revenue Service and the U.S. Department of the Treasury Tuesday over a recent decision to end the requirement that some tax-exempt groups disclose the identities of their major donors.

The lawsuit seeks to block policy changes that benefit social welfare, unions and business associations that spend millions of dollars on political ads.

WASHINGTON (AP) — The Trump administration is lifting requirements that some tax-exempt groups disclose the identities of their donors to federal tax authorities.

The change benefits groups that spend millions of dollars on political ads, such as the U.S. Chamber of Commerce and an organization tied to the billionaire Koch brothers.

KINGSLAND, Ga. (AP) — The Internal Revenue Service has filed a lien against a Georgia county agency for more than $1 million.

The Brunswick News reported Monday that the lien against Camden County's Public Service Authority is for $1.5 million and an estimated $500,000 of sales tax money spent on unapproved projects.

PORTLAND, Ore. (AP) — A Nigerian man who masterminded a conspiracy to obtain millions in refunds from the Internal Revenue Service has been sentenced in Oregon to 15 years in federal prison.

Emmanuel Kazeem, 35, who also lived in Bowie, Maryland, was sentenced Wednesday in Eugene. A jury previously convicted him of fraud, conspiracy and aggravated identity theft.

FAYETTEVILLE, Ark. (AP) — A former Internal Revenue Service agent in Arkansas has been sentenced to more than four years in federal prison for identity theft.

Federal court records in Fayetteville indicate that 36-year-old Ryan Payne of Barling pleaded guilty in January to false representation of a Social Security number and aggravated identity theft. Payne was sentenced on Friday to a total of four years and four months in prison.

FAYETTEVILLE, Ark. (AP) — A former Internal Revenue Service agent in Arkansas has been sentenced to more than four years in prison for stealing the identity of a northwest Arkansas business owner.

Court records show 36-year-old Ryan Payne of Barling was sentenced to 52 months on Friday in federal court in Fayetteville.

Payne pleaded guilty in January to false presentation of a Social Security number and aggravated identity theft in exchange for two other charges being dismissed.

Pearce said Thursday the federal tax-collecting agency is operating under antiquated technologies and processes and that's why he was among those in the U.S. House to support legislation aimed at modernizing the agency.

As Prince heirs stew, bankers and lawyers cash in on estate

MINNEAPOLIS (AP) — As the second anniversary of Prince's death approaches, his heirs have yet to collect a dollar of his estimated $200 million estate. But bankers, lawyers and consultants have earned millions from it.

The long saga to settle the estate provides a cautionary tale about dying without a will, as Prince did when he died of an accidental opioid overdose at his suburban Minneapolis studio on April 21, 2016, and the heirs can't quit squabbling. Here's a look at where things stand:

Senate candidate criticizes group that complained about him

JACKSON, Miss. (AP) — A U.S. Senate candidate in Mississippi said Wednesday that he's filing an Internal Revenue Service complaint against a group that complained to the Federal Election Commission about him.

Republican Chris McDaniel said he believes the Campaign Legal Center is violating its IRS status as a nonprofit group by engaging in political activity.

WASHINGTON (AP) — The Supreme Court ruled Wednesday to make it harder for the federal government to use a section of tax law to convict someone of obstruction.