DETROIT (AP) — When Americans crack open a cold one during Sunday's Super Bowl, it might not be a traditional domestic beer.

Sales of classic beers like Bud Light have been dropping for...

LOS ANGELES (AP) — When John Cena was offered an audio series about a former college football star chasing an NFL dream, he felt a personal connection to it right away.

SAN DIEGO (AP) — Left-hander Logan Allen will have so many memories of his major league debut that he might not know where to start.

There was the moment in the bullpen warming up when a fan...

‘Bumblebee’ cast creat their own Transformers; John Cena’s converts into a toilet 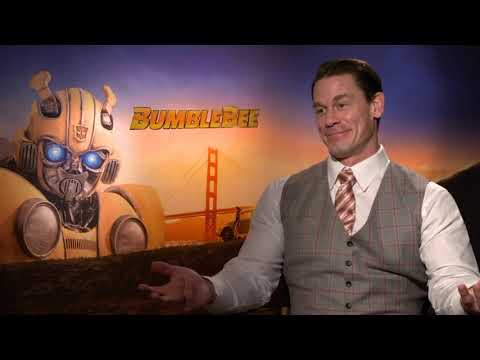 With ‘Bumblebee,’ John Cena finds his stride in Hollywood

LOS ANGELES (AP) — John Cena doesn't believe in ego. How could he when he's used to tens of thousands of WWE fans chanting "John Cena sucks" every time he walks out to the ring?

WWE superstar John Cena is the recipient of this year's Sports Illustrated Muhammad Ali Legacy Award. The award, which was announced Thursday, is given each year to an athlete or sports figure who embodies the ideals of sportsmanship, leadership and philanthropy while using sports as a platform.

Cena will receive the award at the Sportsperson of the Year Awards show on Dec. 11 in Los Angeles.

‘We don’t hold back’: Nikki and Brie Bella reveal all

JIDDAH, Saudi Arabia (AP) — Saudi sports officials are apologizing after images of scantily clad women appeared on big screens during a world wrestling event held in the kingdom, which hosted women and children for the first time.

Viewers said the broadcast of the World Wrestling Entertainment Inc.'s "Greatest Royal Rumble" was cut off for a few moments as the images played.

A previous WWE event held in the ultraconservative kingdom in 2014 was for men only. But Friday night's event in Jiddah included both women and children in attendance to watch the likes of WWE star John Cena and others.

It's all part of a series of social changes pushed by the kingdom's assertive 32-year-old Crown Prince Mohammed bin Salman.

A previous WWE event held in the ultraconservative kingdom in 2014 was for men only. But Friday night's event in Jiddah included both women and children in attendance to watch the likes of WWE star John Cena and others.

It's all part of a series of social changes pushed by the kingdom's assertive 32-year-old Crown Prince Mohammed bin Salman.

"I love Nicole with all my heart, and the split is very tough," the wrestler-turned-actor told The Associated Press on Wednesday. "But that's life. We all go through highs, we all go through lows. I'm going to get through it. I love her. I'll always love her. The fact that my heart hurts for her — I know I was in love. So I'll always have that."

The teen sex comedy, a dude-fest if there ever was one, gets a very overdue and very funny update in Kay Cannon's "Blockers," a gleeful, gross-out farce about the absurdities of gender bias.

Prom night with Mann and Cena

LOS ANGELES (AP) — The power of the youth rallies against gun violence that were held across the U.S. this weekend impressed many of the celebrities who turned out at the Kids' Choice Awards.

Stars including former couple Mariah Carey and Nick Cannon voiced their support for the hundreds of thousands of teenagers and their supporters who spent Saturday marching for gun control.

LOS ANGELES (AP) — John Cena has no children of his own, but the WWE superstar has practically dedicated his work to kids.

Cena has fulfilled nearly 600 wishes for the Make-A-Wish Foundation, more than any other celebrity. He's hosting the Kids' Choice Awards Saturday on Nickelodeon — one of three projects in the works with the children's network. He's also lending his voice to a new animated series and will be producing a new kids' competition show called "Keep it Spotless."

Wrestlemania returning to MetLife Stadium in 2019

The WWE, the Jets and Giants football team and state officials announced the 35th edition of the wrestling extravaganza will be held on Apr. 7, 2019 at the arena. The weeklong showcase will also feature four events at Barclays Center.

Peyton Manning to lead field to green flag at Daytona 500

The two-time Super Bowl-winning quarterback will serve as honorary pace car driver for the 60th running of the Daytona 500. Manning will be behind the wheel of the Toyota pace car and lead the 40-car field to the green flag to start "The Great American Race" on Sunday.

GRAFTON, Mass. (AP) — The pitching gods have naturally blessed Sammy Rosenfield. He's just 14 years old but already stands 6 feet 5 inches and has a wingspan that would rival that of Red Sox ace Chris Sale. He was an all-star for his local AAU baseball team before he tore a ligament in his elbow playing basketball.

"I just love pitching," says Rosenfield, a high honors freshman at Grafton High School. "I want to be a major league pitcher."

Engagements, then TV shows to promote for Fox star Cena

Review: Sniper flick ‘The Wall’ shoots itself in the foot

Not long into the film "The Wall," two U.S. soldiers find themselves pinned down by sniper fire in a remote part of Iraq. One gets on the radio and screams, "Requesting extraction!" You'll know the feeling.

This small and lazy film — featuring two actors, one evil voice and a crumbling stone wall — attempts to be deep and even existential but it can't hide its deep flaws in the constant swirling desert sands.