NEW YORK (AP) — Actor Anthony Rapp and another man filed a lawsuit on Wednesday against actor Kevin Spacey, accusing him of sexual assaults in the 1980s when they were teens.

Scandinavian writer Ari Behn — the ex-husband of Norwegian Princess Martha Louise and among the people who had accused actor Kevin Spacey of sexual misconduct — died this week, his manager said....

Top stories of 2019 played out in court in Massachusetts

BOSTON (AP) — 2019's biggest stories in Massachusetts played out in the courtroom.

Dozens of wealthy and privileged parents — some of them Hollywood stars — were ensnared in a nationwide...

LOS ANGELES (AP) — Los Angeles prosecutors have rejected a sexual battery case against Kevin Spacey because the accuser has died.

MILAN (AP) — Actor Kevin Spacey read a poem about a worn-out and dejected boxer during an unexpected performance at a Rome museum Friday night, weeks after a criminal sexual misconduct case...

Kevin Spacey’s legal woes persist even with groping case out

BOSTON (AP) — Kevin Spacey's legal woes are not over, despite the collapse of the only criminal case brought against the two-time Oscar winner since he became mired in sexual misconduct...

The Latest: Spacey case sank by accuser’s refusal to testify

BOSTON (AP) — The Latest on the decision to drop the charge accusing Kevin Spacey of groping a young man in 2016 (all times local):

BOSTON (AP) — Prosecutors dropped a case Wednesday accusing Kevin Spacey of groping a young man at a resort island bar in 2016 after the accuser refused to testify about a missing cellphone the...

Man who says Spacey groped him invokes right not to testify

BOSTON (AP) — The man who accused Kevin Spacey of groping him at a Massachusetts resort island bar in 2016 asserted his Fifth Amendment right against self-incrimination and refused to testify...

The Latest: Accuser’s mom: No settlement in Spacey lawsuit

NANTUCKET, Mass. (AP) — The Latest on the case accusing Kevin Spacey of groping a young man at a Nantucket bar in 2016 (all times local):

The Metropolitan Police is investigating six claims of sexual assault and...

BOSTON (AP) — A young man who says Kevin Spacey groped him in a Nantucket bar in 2016 has dropped his lawsuit against the Oscar-winning actor, his lawyer said Friday.

BOSTON (AP) — A young man who accused Kevin Spacey of groping him at a resort island bar in 2016 filed a lawsuit against the actor, who is also fighting a criminal charge stemming from the alleged...

BOSTON (AP) — A man who says Kevin Spacey groped him at a bar on a resort island cannot find the cellphone he has been ordered to turn over to the defense, the accuser's attorney said...

Judge: Spacey accuser’s phone must be turned over to defense

NANTUCKET, Mass. (AP) — A Massachusetts judge says a phone used by a young man who says Kevin Spacey groped him at a bar must be turned over to the defense.

Kevin Spacey shows up for hearing in groping case

NANTUCKET, Mass. (AP) — Kevin Spacey made an unusual appearance Monday at a Massachusetts courthouse where his attorney asked for a swift trial in the groping case against the actor, saying Spacey...

NANTUCKET, Mass. (AP) — The Latest on the case accusing actor Kevin Spacey of groping a young man in 2016 (all times local):

BOSTON (AP) — The man who accused Kevin Spacey of groping him at a bar in 2016 deleted text messages that would support Spacey's claims of innocence, the actor's lawyer said in court documents...

NANTUCKET, Mass. (AP) — A judge is ordering a Nantucket restaurant to hand over any surveillance footage taken the night prosecutors say actor Kevin Spacey groped a young man in...

NANTUCKET, Mass. (AP) — A judge is weighing motions filed by lawyers for Kevin Spacey, charged with groping an 18-year-old man on Nantucket in 2016.

NANTUCKET, Mass. (AP) — A judge has approved a request by attorneys for Kevin Spacey to preserve more phone records in the sexual assault case against the Oscar-winning actor. 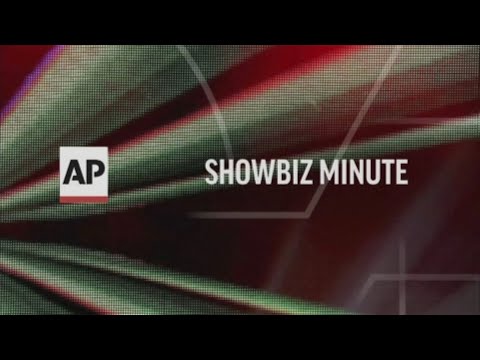 NANTUCKET, Mass. (AP) — Attorneys for Kevin Spacey are seeking surveillance footage, text messages and other records they say they need to defend the disgraced actor against accusations that he...

Lisa Borders steps down as head of Time’s Up organization

LOS ANGELES (AP) — Lisa Borders says she has resigned as president and CEO of Time's Up, the gender equality initiative formed last year in response to sexual misconduct allegations in Hollywood.

Borders says in statement Monday that she is stepping aside "with deep regret" due to family issues. She didn't elaborate.

Anthony Rapp hopes he did his part to ‘change the culture’

NEW YORK (AP) — Actor Anthony Rapp said he came forward with sexual misconduct allegations against Kevin Spacey because he feared assaults could "keep happening" if he said nothing.

The younger actor spoke about the incident on the red carpet for the second season of his streaming series, "Star Trek Discovery" on Thursday in New York. He said he hoped he did his part to "change the culture."

Rapp discusses why he came forward to accuse Spacey 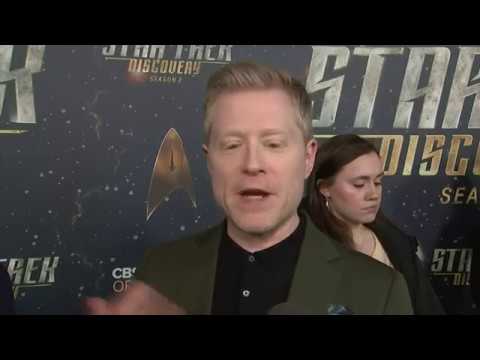 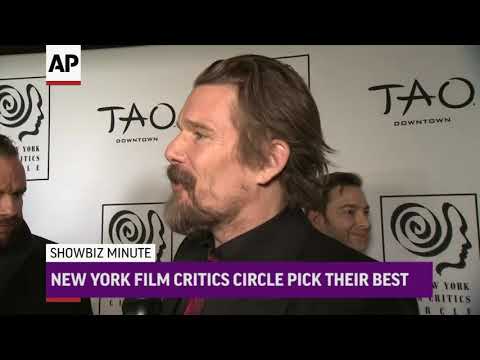 NANTUCKET, Mass. (AP) — Kevin Spacey pleaded not guilty Monday to groping an 18-year-old busboy in 2016 in the first criminal case brought against the disgraced actor following a string of sexual misconduct allegations that crippled his career.

Spacey's court appearance came more than a year after former Boston TV anchor Heather Unruh accused the former "House of Cards" star of sexually assaulting her son in a bar on the Massachusetts resort island of Nantucket. 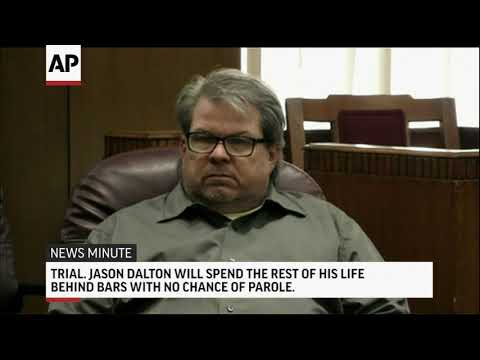 NANTUCKET, Mass. (AP) — The Latest on the arraignment of Kevin Spacey (all times local):

Kevin Spacey's legal team has entered a not guilty plea on his behalf to charges the actor groped an 18-year-old busboy in a Massachusetts bar in 2016.

Spacey was arraigned on a charge of felony indecent assault and battery during a hearing Monday at Nantucket District Court. The judge ordered the disgraced actor must stay away from the young man. 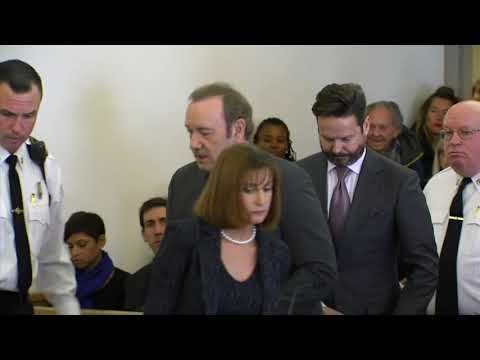 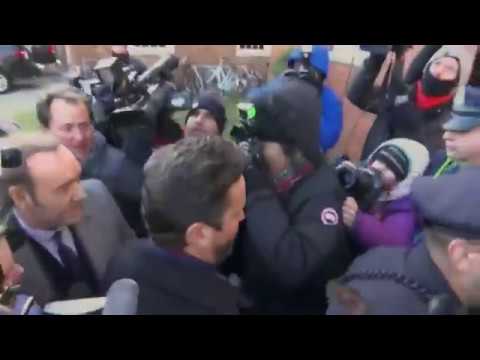 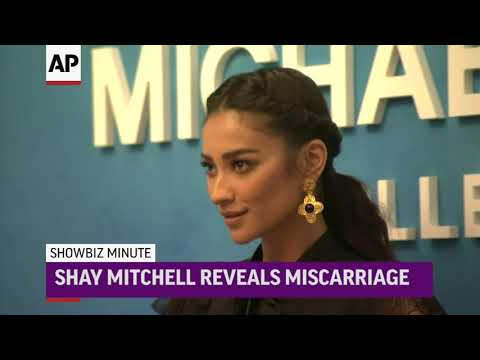 BOSTON (AP) — Former "House of Cards" star Kevin Spacey must appear in a Massachusetts court on accusations that he groped a young man in 2016, a judge ruled on Monday.

The 59-year-old Oscar-winning actor had argued he should be excused from attending his Jan. 7 arraignment at the Nantucket District Court because his presence would "amplify the negative publicity already generated in connection with this case." But Judge Thomas Barrett denied Spacey's request.

BOSTON (AP) — Lawyers for Kevin Spacey are asking a judge to allow the actor to skip his arraignment on sexual assault charges in a Massachusetts courthouse next month.

BOSTON (AP) — A Massachusetts man who says he was groped by Kevin Spacey at a Nantucket restaurant in 2016 caught part of his encounter with the actor on video, according to court records.

Kevin Spacey is charged with groping a young man

BOSTON (AP) — Kevin Spacey has been charged with groping the 18-year-old son of a Boston TV anchor in 2016 — the first criminal case brought against the Oscar-winning actor since his career collapsed amid a string of sexual misconduct allegations over a year ago.

US president in Netflix series laid to rest in SC cemetery

And Gaffney's Oakland Cemetery has the gravestone to prove it.

Underwood, the ruthless politician who rose from House Majority Whip to president of the United States through treachery, deception and murder in Netflix's hit series House of Cards, now calls Oakland Cemetery his eternal resting place.

LOS ANGELES (AP) — The spirit of Francis Underwood and misdeeds past haunt the sixth season of "House of Cards" and its new U.S. president, the widowed Claire Underwood.

Francis is very much dead when the Netflix series opens its final, eight-episode run Friday, as an image of Claire bending tenderly over his coffin makes clear.

Whirlwind year lets Michelle Williams realize her own worth

LOS ANGELES (AP) — Michelle Williams can't believe it's been less than a year since "the pay stuff." Time has seemingly accelerated since last October when, while shooting the comic book movie "Venom," the unimaginable began to happen: Titans of her industry started to fall under #MeToo. Then months later, after reshoots for "All the Money in the World," which were hurriedly completed to remove scenes featuring one of the accused, Kevin Spacey, Williams became the center of a very public controversy over a vast pay discrepancy between herself and her co-star Mark Wahlberg. She was paid less than $1,000. He got $1.5 million. 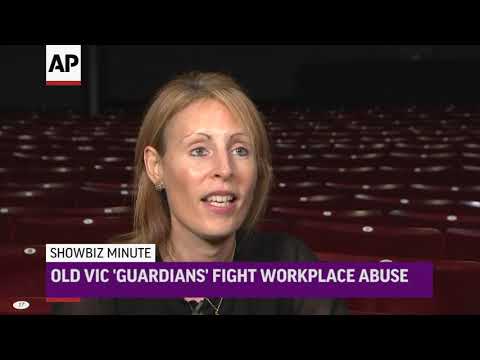 ‘House of Cards’ trailer has Robin Wright at center stage

NEW YORK (AP) — The trailer for the next season of "House of Cards" is missing Kevin Spacey and declares: "The reign of the middle-aged white man is over."

The trailer released Thursday depicts Robin Wright's Claire Underwood taking over as president after her husband's death in the Netflix series.

Spacey, who played the late President Frank Underwood, was fired from the show after several employees accused him of inappropriate behavior.

The celebrated British actress says "I can't approve in any way the fact that, whatever he has done, that you then start to cut him out of films."

Spacey was erased from "All the Money in the World" last year and replaced with Christopher Plummer after allegations of sexual harassment against him.

The Los Angeles County District Attorney's Office made no comments Tuesday on the merits of the accusations.