14 businesses cited for not complying with health orders

NASHVILLE, Tenn. (AP) — Health officials in Tennessee have cited 14 Nashville businesses including a restaurant owned by singer Kid Rock for not complying with coronavirus public health...

Anderson and Peters married Monday in a private ceremony in Malibu, California, a representative for Anderson...

A Kid Rock-owned restaurant in Detroit's Little Caesars Arena will close once its licensing agreement expires this spring, the singer and arena operator announced separately...

Owen will take the stage ahead of the 61st running of the "Great American Race" at Daytona International Speedway on Feb. 17.

NASHVILLE, Tenn. (AP) — Singer Kid Rock has hit another sour note with some in Nashville, this time over a large sign planned for his recently opened bar.

News outlets report the 20-foot-tall (6-meter-tall) neon sign will feature a giant guitar in which the base of the instrument is intentionally shaped like a woman's buttocks. 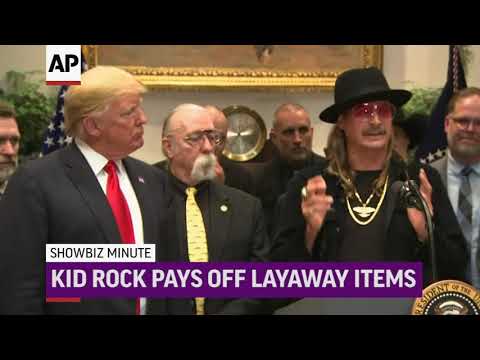 NASHVILLE, Tenn. (AP) — Singer Kid Rock says he followed the lead of actor Tyler Perry by paying off the layaway items of hundreds of Walmart customers in Tennessee.

Store manager Tom Meyer tells The Tennessean Kid Rock spent $81,000 to pay the balances of 350 customer accounts at a Walmart in Nashville.

In Monday's statement, Tootsies Orchid Lounge owner Steve Smith said he's happy the money is benefiting a great cause in the Vanderbilt Children's Hospital and hopes to keep supporting the hospital and parade.

His attorney previously said the lawsuit was under consideration.

NASHVILLE, Tenn. (AP) — A man who helped stop a Waffle House shooter stepped into the role as grand marshal for the Nashville Christmas Parade as a last-minute replacement Saturday for Kid Rock, who got the boot for his profane comments on live TV.

Instead, parade organizers have invited James Shaw Jr., the man hailed as a community hero for wrestling a gun away from the shooter during a Nashville Waffle House shooting in April that killed four people and injured four others.

The Latest: Kid Rock out of Christmas parade after comments

Instead, the parade has invited the man hailed as a community hero for wrangling a gun away from the shooter during a deadly Nashville Waffle House shooting in April.

Trump signed the Orrin B. Hatch Music Modernization Act on Thursday. The bill won wide bipartisan support in the House and Senate and is backed by the music industry. It's named after the retiring Utah senator, who is also a musician.

LANSING, Mich. (AP) — Republican John James of Michigan said Wednesday he raised $3.6 million in the last quarter, doubling what Democratic Sen. Debbie Stabenow took in as he seeks to gain ground in a race that she polls suggest she has led by double- igits.

Stabenow still has a financial edge, with $3 million cash on hand to James' $2.7 million. The third-term senator also has already spent $3.2 million on TV aids to air in the final four weeks of the campaign.

NASHVILLE, Tenn. (AP) — Southern rockers Lynyrd Skynyrd will kick off their final tour May 4 in West Palm Beach, Florida, more than 40 years after the band's debut album was released.

DETROIT (AP) — Kid Rock has donated about $122,000 from sales of merchandise promoting his potential U.S. Senate campaign to a voter-registration organization.

The Detroit-area rocker, whose real name is Robert Ritchie, teased the public for months. At a September concert, he was introduced as Michigan's "next senator." In October, he confirmed he wasn't running.

By The Associated PressNovember 10, 2017 GMT

Getting your new album noticed these days seems to involve elaborate publicity stunts and social media gimmicks, but Kid Rock upped the ante this fall — he flirted with a run for U.S. Senate. Even Taylor Swift hasn't gone that far.

‘Are you kidding me?’: Kid Rock says no to US Senate run

Kid Rock told SiriusXM host Howard Stern, "Are you kidding me?" during an expletive-laden interview Tuesday.

The Detroit-area rocker has been teasing the public for months. At a Sept. 12 concert, Kid Rock was introduced as Michigan's "next senator" and talked about running for president.

Courtney Love, Talib Kweli, Kid Rock, Cyndi Lauper, Paul Stanley and Lin-Manuel Miranda were among scores of fans posting remembrances on Twitter, where Petty was the top worldwide trending topic Monday afternoon. A memorial was scheduled for his star on the Hollywood Walk of Fame.

Epstein likely to leave Senate race, run for House instead

LANSING, Mich. (AP) — Republican U.S. Senate candidate Lena Epstein said Thursday she is leaning toward instead running for a suburban Detroit House seat opening due to a retirement, a move that is to be finalized in the next few days.

DETROIT (AP) — In the end, the political aspirations of musician Kid Rock were not laid bare Tuesday night before thousands of screaming fans when the rocker performed the first of six concerts at a new sports arena in Detroit.

For much of the summer, the Detroit-area native has teased a Republican run for the U.S. Senate. He continued doing so at the concert but did not say if he would enter the race.

DETROIT (AP) — The Latest on Kid Rock and his flirtation with a political bid (all times local):

Kid Rock continues to tease a Republican run for U.S. Senate in Michigan without making an announcement.

The musician opened Detroit's new Little Caesars Arena Tuesday night. His publicist had said he would give fans exclusive insight on his political views, but his speech at the beginning of the concert largely mirrored what he said at a Grand Rapids concert last week.

Kid Rock responds on Facebook to calls to cancel concerts

The Detroit-area native whose real name is Robert Ritchie posted an obscenity-laced response Monday on Facebook to a planned protest by the National Action Network's Detroit chapter.

Kid Rock keeps up criticism of Kaepernick, others at concert

The entertainer spoke between songs Wednesday at a concert in Grand Rapids, Michigan. He used a podium with a faux-federal seal that read "United States of 'Merica." In his profanity-laden speech, Kid Rock dismissed those calling him "racist."

DETROIT (AP) — The choice of Kid Rock as the opening act for a new sports arena in mostly black Detroit has injected the musician into the national debate over race and culture because of his embrace of the Confederate flag, an expletive-laced criticism of NFL quarterback Colin Kaepernick and unabashed support for President Donald Trump.

DETROIT (AP) — A Republican business executive who flew helicopters in the Iraq War may run for U.S. Senate in Michigan.

Kid Rock hints at potential US Senate run in Michigan

The musician from suburban Detroit is teasing his potential 2018 candidacy, though it is news to Michigan Republicans.

Kid Rock, who was born Robert Ritchie, said Wednesday that a website hinting at his campaign — www.kidrockforsenate.com — is legit.

"I have had a ton of emails and texts asking me if this website is real," he said on Facebook and Twitter. "The answer is an absolute YES. Stay tuned, I will have a major announcement in the near future."

DETROIT (AP) — Musician Kid Rock will kick off the opening of the new home arena for the Detroit Red Wings and Detroit Pistons with four concerts.

Kid Rock was born Robert Ritchie and lives in suburban Detroit. He announced the concerts Thursday from the arena which still is under construction.

NASHVILLE, Tenn. (AP) — Country star Jason Aldean rarely has time to be a tourist when he's touring, but during a recent trip to New York, he and his wife, Brittany, found some downtime to walk around the city. The crowds afford the Georgia-born singer a little anonymity that he doesn't always get back home.