Grandin is an animal science professor at Colorado State University and...

WARSAW, Poland (AP) — A Polish appeals court upheld a lower court's verdict in a slander case and ruled Monday that pro-democracy fighter and former president Lech Walesa must apologize to the...

Slain mayor lies in state at Solidarity museum in Poland

WARSAW, Poland (AP) — The slain mayor of Gdansk lay in state Thursday at a museum devoted to Poland's pro-democracy Solidarity movement, which started in a local shipyard and the late city leader was active in as a student.

Residents lined up to file past the coffin of Mayor Pawel Adamowicz, which was surrounded by white-and-green flowers and draped in the flag of the city that re-elected him to a sixth term in the fall.

WARSAW, Poland (AP) — Poland's port city of Gdansk, where the longtime mayor died Monday after being stabbed at a fundraiser, served as the setting for key events in 20th century European history, from the early shots of World War II to the Cold War's final days.

The movement that played a pivotal role in the collapse of communism across Eastern Europe was born in the local shipyard, an event Mayor Pawel Adamowicz and others recalled when they called Gdansk a city of "freedom and Solidarity." 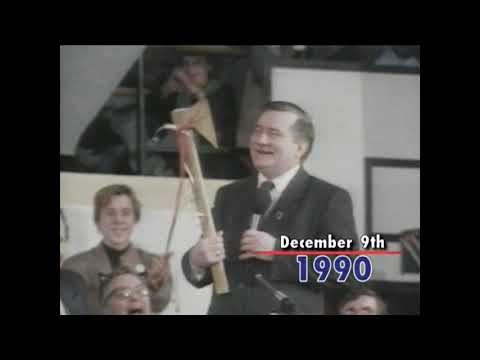 The founder of Poland's anti-communist Solidarity movement attended President George H.W. Bush's state funeral in Washington wearing a T-shirt bearing the word "Konstytucja" (Constitution), a symbol of a political struggle in his homeland against the populist government.

Poland’s Walesa must apologize to rival in slander case

WARSAW, Poland (AP) — A Polish court ruled Thursday that Lech Walesa, the anti-communist dissident and former president of Poland, must apologize to the head of Poland's ruling party in a slander case.

Jaroslaw Kaczynski, the head of the ruling Law and Justice party, sued Walesa for blaming him in social media posts for the 2010 plane crash in Smolensk, Russia, that killed Kaczynski's twin brother, President Lech Kaczynski, and 95 others, including top Polish political and military leaders.

WARSAW, Poland (AP) — An opposition lawmaker in Poland is demanding that a monument to a prominent priest of the Solidarity pro-democracy movement be removed following allegations that he sexually abused minors.

The monument to the late Mgr. Henryk Jankowski stands in Gdansk in front of St.Brygida's church, where he was the rector.

Jankowski rose to prominence in the 1980s through his support for Solidarity and its leader Lech Walesa in their struggle against Poland's communist authorities.

Wednesday's funeral service is at the Washington National Cathedral.

Bush died on Friday at age 94 and is lying in state in the rotunda of the U.S. Capitol on Tuesday.

Polish leader suing Walesa for blaming him for plane crash

Kaczynski, the powerful head of the ruling Law and Justice party, is suing Walesa for blaming him in social media posts for the 2010 plane crash in Smolensk, Russia, that killed Kaczynski's twin, then-President Lech Kaczynski, along with 95 others including top Polish political and military leaders.

Tusk, seen as a likely contender in Poland's 2020 presidential election, spoke in the city of Lodz on the eve of the 100th anniversary of the country regaining its statehood at the end of World War I after 123 years of foreign rule.

Poland’s Walesa wants to reconcile with foes before death

He expressed that sentiment in a tweet late Wednesday addressed to his longtime political foe, Jaroslaw Kaczynski, who is Poland's ruling party leader.

The 74-year-old Walesa, who has a heart pacemaker, said they should both expect to move soon "into eternity" and that he wanted to leave his affairs in order.

WARSAW, Poland (AP) — Mick Jagger made a reference to Poland's controversial judicial system overhaul during a Rolling Stones concert Sunday, according to news portals in Poland.

Gazeta.pl said Jagger spoke in Polish to fans at the concert in Warsaw's National Stadium, saying: "I am too old to be a judge but not too old to sing." One of the judicial changes is setting a maximum age of 65 for judges, forcing many of them to retire.

WARSAW, Poland (AP) — Poland's international isolation and political uncertainty at home deepened on Wednesday as a purge of the Supreme Court's justices took effect, with the chief justice defiantly refusing to step down.

First President Malgorzata Gersdorf arrived for work as usual at the court in Warsaw, vowing to continue her constitutionally mandated term, which runs through 2020. The court's judges support this view.

WARSAW, Poland (AP) — Anti-government protests broke out late Tuesday in Warsaw and several other Polish cities in defense of the country's constitution, judicial independence and the rule of law.

The protests came as a lower retirement age was taking effect for Poland's Supreme Court justices. The law introduced by the ruling right-wing party is forcing the chief justice and as many as one-third of the court's sitting judges to step down.

Poland’s Walesa urges opposition to unite ahead of elections

The 74-year-old Walesa spoke at a meeting of opposition parties and activists in the Baltic city of Gdansk, at the center dedicated to the Solidarity movement he led in the 1980s that brought democracy to Poland.

WARSAW, Poland (AP) — Ex-Polish President Lech Walesa and several other former leaders appealed Wednesday to the European Union to help defend the rule of law in their country under a populist government that is overhauling the judiciary.

In a statement published in the daily Gazeta Wyborcza, the former leaders said they fear that a new law regulating the Supreme Court that takes effect on July 3 will destroy the democratic system of checks and balances in Poland.

WARSAW, Poland (AP) — Former Polish president and anti-communist leader Lech Walesa met Monday with disabled people and their parents who have been staging a sit-in in the parliament for over a month, offering them his solidarity and strongly denouncing the country's populist government.

WARSAW, Poland (AP) — Non-government organizations in Poland have distanced themselves from the right-wing government's policies that have strained Polish-Jewish relations and some say have led to a wave of anti-Semitism.

In a letter to "international public opinion" they said they didn't share the government's views but supported Polish-Jewish dialogue, including the painful truth about the Holocaust.

Lech Walesa: My family paid for my pro-democracy struggle

WARSAW, Poland (AP) — Lech Walesa, the icon of Poland's struggle for democracy, has said his role as a national hero was paid for with his family life.

Walesa spearheaded Poland's Solidarity movement in the 1980s and then served as president under democracy from 1990-95. During the presidency he lived in Warsaw, while his wife, Danuta, and their eight children remained home, in Gdansk.

WARSAW, Poland (AP) — Polish media are reporting that Lech Walesa, the former democracy activist and Nobel Peace Prize winner, was in a minor car accident but is unhurt.

The accident happened Thursday in Gdansk, the northern Polish city where Walesa lives.

Critics of the investigation say it's a new step by Poland's ruling party to diminish Walesa's status as leader and hero of the country's victorious pro-democracy movement of the 1980s.

WARSAW, Poland (AP) — Poland's president unexpectedly announced Monday that he will veto two bills that would have sharply curtailed the independence of the judiciary, a victory for peaceful protesters who had gathered by candlelight every night for more than a week.

The European Union criticized the bills as assaults on the democratic system of checks and balances and threatened to begin proceedings soon to strip Poland of its voting rights in the 28-member bloc.

Protests across Poland over law to control judiciary

WARSAW, Poland (AP) — Outrage over plans by Poland's governing party to put the judicial system under its political control sparked another day of nationwide protests Saturday, with some people gathering outside the home of ruling party leader Jaroslaw Kaczynski and accusing him of being a dictator.

WARSAW, Poland (AP) — Hundreds of government critics held a peaceful protest of the monthly observances Poland's ruling party holds in memory of President Lech Kaczynski and 95 others killed in a 2010 plane crash.

The critics say the observances are being used for political purposes by Kaczynski's twin brother, Jaroslaw, who is the ruling Law and Justice party's leader. They say that Kaczynski uses his mourning to rally supporters for his policies that threaten democracy.

Jaroslaw Walesa told The Associated Press via text message that his father was feeling "unfortunately weak." It was not immediately known when he could be discharged from the heart diseases ward of the Gdansk University Clinic.

No one hurt when plane makes emergency landing in Poland

WARSAW, Poland (AP) — A spokesman for Polish firefighters says a plane with 94 people aboard flying from Gdansk to Copenhagen returned to the airport and made an emergency landing after smoke appeared on board. No injuries were reported.

WARSAW, Poland (AP) — It's been seven years since Poland lost its president in a plane crash in Russia. His twin brother, who effectively runs the Polish government today, remains in mourning, only wearing black suits and black ties in public — and determined to punish those he blames for the crash.

WARSAW, Poland (AP) — Lech Walesa, Poland's former president and leader of its peaceful pro-democracy struggle, on Tuesday rejected evidence recently presented by state experts who claim it proves that he was a communist-era paid informer.

The allegations against Walesa are not new and he has been denying them ever since they surfaced in the early 1990s, tarnishing his image of a national hero and an icon of struggle against communism.

Evidence mounts against Walesa, but he is still hero to many

WARSAW, Poland (AP) — A Polish state historical institute presented new evidence Tuesday that Lech Walesa, the leader of a peaceful pro-democracy struggle that challenged the communist regime in the 1980s, acted as a paid informant to the communist secret police in the 1970s.

WARSAW, Poland (AP) — Former Polish President Lech Walesa attended the funeral Friday of a son who died at the age of 43 after struggling with alcoholism.

The Walesa family held a private funeral for Przemyslaw Walesa in their home city of Gdansk. He was third-born of Lech Walesa and wife Danuta's eight children — four sons and four daughters.

PAP said Przemyslaw Walesa, 43, was found dead in his apartment in the northern city of Gdansk by a family member.

Gdansk police spokeswoman Aleksandra Siewert told The Associated Press only that a body of a 43-year-old man was found by a relative in an apartment. She declined to identify the man at this early stage of proceedings.

WARSAW, Poland (AP) — Former Polish president and Solidarity founder Lech Walesa said Thursday that he doesn't believe corruption allegations that prosecutors have made against another key activist of the 1980s freedom movement.

A metal urn with Wajda's ashes, surrounded by white flowers, and his black-and-white portrait were placed by the altar at the 13th century Holy Trinity church of the Dominican friars in Krakow, southern Poland.

WARSAW, Poland (AP) — Lech Walesa, the former Polish president and a longtime adversary of Poland's current leadership, has been stripped of state protection when he travels abroad, and says he believes the motivation is political.