Click to copy
Who are the Little Rock Nine?

Segregation lingers in US schools 60 years after Little Rock

LITTLE ROCK, Ark. (AP) — Among the most lasting and indelible images of the civil rights movement were the nine black teenagers who had to be escorted by federal troops past an angry white mob and through the doors of Central High School in Little Rock, Arkansas, on Sept. 25, 1957.

Ernest Green, the first African American to graduate from Central, spoke to the AP about his experience.

LITTLE ROCK, Ark. (AP) — When she saw images unfold from a deadly white supremacist rally this summer in Virginia, Minnijean Brown Trickey immediately thought about the angry mob she and eight other black students faced when they integrated an all-white high school in Little Rock 60 years ago.

Little Rock teachers to go on strike over district’s control

LITTLE ROCK, Ark. (AP) — Little Rock teachers will go on strike for one day this week over an Arkansas panel's decision to strip their collective bargaining power and complaints about state...

AP Was There: Paratroops with bayonets escort Little Rock 9

LITTLE ROCK, Ark. (AP) — EDITOR'S NOTE: Sixty years ago, the Little Rock Nine became a symbol of heroism in the throes of racial progress, but their bravery made many whites dig their heels in further to maintain segregated schools.

AP Was There: Lawyers argue over separate but equal doctrine

The court ordered all public schools to act swiftly, integrating with deliberate speed. But it was an unpopular decision that was met with great resistance.

On May 17, 1954, the U.S. Supreme Court issued its landmark Brown v. Board of Education of Topeka ruling, which declared that racially segregated public schools were inherently unequal.

Here is the transcript of Brown v. Board of Education:

SUPREME COURT OF THE UNITED STATES 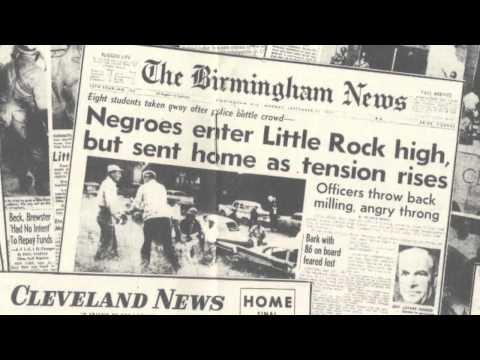 The civil rights movement finally pressured the politicians to act—and the press served as its witnesses. With a presence in the South stretching back 90 years, The Associated Press was uniquely prepared to report it.