1926 — The major league rules committee mandates that pitchers must have access to a rosin bag.

WASHINGTON (AP) — The Orlando Magic beat Washington 130-120 on Saturday night, overcoming another triple-double by Russell Westbrook in his home debut for the Wizards.

BLOOMINGTON, Ind. (AP) — Chase Audige scored all of his 17 points in the second half to lead four Northwestern players in double figures and the Wildcats beat Indiana 74-67 on Wednesday night....

Northwestern knocks off No. 4 Michigan State, 79-65

By The Associated PressDecember 21, 2020 GMT

EVANSTON, Ill. (AP) — Boo Buie scored a career-high 30 points and Northwestern beat Michigan State for the first time in almost a decade, topping the No. 4 Spartans 79-65 on Sunday...

COLUMBIA, S.C. (AP) — The vice chair of the county council that governs South Carolina's capital city area has been indicted on public corruption charges that include allegations she used a...

By The Associated PressNovember 12, 2020 GMT

1949 — Chicago’s Bob Nussbaumer intercepts four passes as the Cardinals set an NFL record for points in a regular-season game with a 65-20 victory over the New York...

By The Associated PressNovember 6, 2020 GMT

1943 — The Detroit Lions and New York Giants play the last scoreless tie in the NFL.

1968 — Red Berenson scores six goals, including four in the second period, to lead the St....

EDITORS — With the Tokyo Olympics postponed for a year because of the coronavirus pandemic, The Associated Press is looking back at the history of Summer Games. Here are some of the highlights of...

NEW YORK (AP) — Sneakers worn by Michael Jordan, Magic Johnson and Scottie Pippen while they played for the Dream Team are being auctioned.

By The Associated PressApril 9, 2020 GMT

LOS ANGELES (AP) — The hottest party in town Saturday night was on DJ D-Nice’s Instagram, where over 100,000 accounts tuned in during his epic 10-hour set including the likes of Michelle Obama,...

SAO PAULO (AP) — For little Kobe Bryant growing up in Italy, the player that amazed him as a child was a skinny and half bald Brazilian guard who often beat his father's teams with long distance...

BOSTON (AP) — The basketball Hall of Fame is auctioning off the actual plaques used to mark the enshrinement of some of the sport's biggest stars, including Michael Jordan, Magic Johnson and...

NEW YORK (AP) — Former NBA commissioner David Stern has been remembered at a memorial service in New York today as a mentor and a leader, a Little League parent and a loyal friend. Magic Johnson...

NEW YORK (AP) — David Stern was remembered Tuesday as a mentor and a leader, a Little League parent and a loyal friend.

DALLAS (AP) — Luka Doncic's pursuit of Jason Kidd's triple-double record in Dallas will have to wait. This night was about the 20-year-old sensation's 3-point shooting.

LOS ANGELES (AP) — Rob Pelinka was given the title of vice president of basketball operations by the Los Angeles Lakers on Friday, almost three years after the former agent was hired as general...

DALLAS (AP) — Luka Doncic barely missed a step and added a little Magic on his return to the Dallas lineup on Thursday night.

He had missed the previous four games because of a sprained...

The historically black university says it's one of its...

Doncic had his second straight triple-double and third of the season, finishing with 29...

HOUSTON (AP) — Russell Westbrook said he'll take some time to reflect on the significance of his latest performance.

After posting his second straight triple-double since joining the Houston...

The NBA season starts Tuesday night, and here are 10 storylines to follow for the 2019-20 campaign:

Magic Johnson might actually miss the Los Angeles Lakers if he wasn't always checking up on them.

Johnson quit as the team's president of basketball operations at the end of the last season,...

LAGUNA NIGUEL, Calif. (AP) — Magic Johnson's game-worn jersey from the 1992 Barcelona Olympics is up for bid in an auction that ends this weekend.

A person with knowledge of the situation says the...

Giannis Antetokounmpo of the Milwaukee Bucks has won Most...

Larry Bird's place in NBA history stretches from the record book to the rule book.

A Hall of Fame player later became a successful coach and team executive. Along the way, he watched free...

MIAMI (AP) — Dwyane Wade of the Miami Heat has been selected as this season's winner of the Magic Johnson Award, presented by the Pro Basketball Writers Association.

NEW YORK (AP) — Magic Johnson and Larry Bird, whose coast-to-coast rivalry in the 1980s propelled the NBA to a new level of popularity, will be honored with the Lifetime Achievement...

Big man on court: Nikola Jokic showing off all his skills

DENVER (AP) — Earlier in the playoffs, he was drawing comparisons to Wilt Chamberlain. This week, it's Magic Johnson.

As the casual basketball fan — everyone, really — is finding out, Denver...

DETROIT (AP) — Plans are moving forward by a company with ties to former NBA star Magic Johnson to redevelop property at the old Michigan Fairgrounds in Detroit.

Luke Walton out as Lakers coach after 3 losing seasons

LOS ANGELES (AP) — Luke Walton is out as coach of the Los Angeles Lakers after three losing seasons.

EL SEGUNDO, Calif. (AP) — The Los Angeles Lakers already had plenty of problems to fix during the summer after their sixth straight losing season.

Final day of NBA regular season arrives with much to decide

The final day of the regular season has arrived, with one playoff spot to decide, seven of the eight first-round matchups still unknown and nine different seeds still not clinched.

LOS ANGELES (AP) — Magic Johnson abruptly quit as the Los Angeles Lakers' president of basketball operations Tuesday night, citing his desire to return to the simpler life he enjoyed as a wealthy...

LOS ANGELES (AP) — After Magic Johnson shockingly quit his job as the Lakers' president of basketball operations right before the game, the Lakers certainly didn't play like a franchise in... 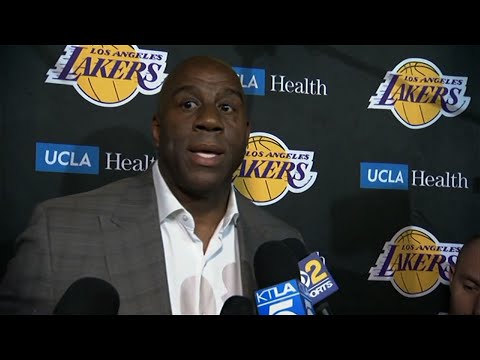 1st-timers Texas Tech and Virginia face off for NCAA title

MINNEAPOLIS (AP) — For Virginia and Texas Tech, doing something that had never been done before took hard work, dedication, determination — and vision.

Michigan State’s Winston has chance to join Magic and Mateen

The crafty point guard is among a handful of Michigan State players to win Big Ten player of the year honors and earn...

WASHINGTON (AP) — Cassius Winston missed an open jump shot but was right there for the rebound. Without hesitating, he stepped back and swished a 3-pointer.

LeBron James to sit out last 6 games of Lakers’ season

James will sit out the final six games of the Lakers' sixth consecutive losing season, the team announced...

But he's focused on a different shiny trophy than the one his former rival snagged Sunday night.

Holding his Oscar, Bryant later said, "I feel better than winning a championship, to be honest with you. I swear I do."