Shelley Morrison, Rosario on ‘Will & Grace,’ dies at 83

LOS ANGELES (AP) — Shelley Morrison, an actress with a 50-year career who was best known for playing a memorable maid on “Will & Grace,” died Sunday, her publicist said.

NBC said Thursday that the rebooted sitcom will wrap after its upcoming 2020 season, with the air date to be...

Minutes before signing a massive agriculture bill, he tweeted a video of himself at the 2006 Emmy awards dressed like a farmer and belting out the tune to "Green Acres" with "Will and Grace" star Megan Mullally.

"Green Acres is the place to be. Farm living is the life for me," sang Trump, holding a pitchfork and wearing a white T-shirt, denim overalls and a straw hat.

Review: Things get quirky in ‘Greatest Love Story Ever Told’

"The Greatest Love Story Ever Told" (Dutton), by Megan Mullally and Nick Offerman

In their new book, actors and humorists Megan Mullally and Nick Offerman leave nothing off the table. "The Greatest Love Story Ever Told" describes their passionate marriage, acknowledges their non-traditional views of life and celebrates their ability to make it all work in Hollywood. 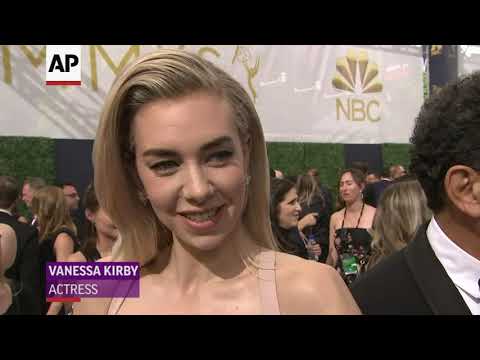 Television academy: thumbs down on the latest reboots

NEW YORK (AP) — Television executives and many viewers love the idea of reviving series and ideas from the past. Emmy voters? Not so much.

"Roseanne" quickly became television's top-rated comedy upon its return, until ABC pulled the plug following star Roseanne Barr's racist tweet. The series was not among the eight comedies nominated for an Emmy on Thursday, however. Laurie Metcalf earned a supporting actress nod, but Barr and Conner family patriarch John Goodman were ignored.

LOS ANGELES (AP) — As soon as Eric McCormack stepped into the old "Will & Grace" kitchen, he was Will Truman again. Debra Messing says she still feels like Grace Adler, but these days, she has to physically warm up before stepping into that persona. Megan Mullally said finding Karen again was "like riding a bike." For Sean Hayes, rediscovering Jack McFarland was "like waking up out of a coma, maybe — a Jack coma."

BEVERLY HILLS, Calif. (AP) — The revival of "Will & Grace" has yet to air, but NBC says it's getting at least a second season.

NBC Entertainment Chairman Robert Greenblatt told a TV critics' meeting Thursday that the deal had just been worked out.

Greenblatt cited an "outpouring of love" from fans of the original series in announcing the second season. He said he was glad to have the show on for a minimum of two years, opening the door to more.

NEW YORK (AP) — NBC is bringing back its "must-see TV" Thursday franchise this fall with the revival of "Will & Grace," and by moving its heartwarming hit "This is Us" to the same night.

The network announced its schedule Sunday, kicking off the annual week where broadcasters outline next season's plans to advertisers. NBC is the second most popular network behind CBS, first among the younger viewers it covets, and is bullish on next year since it will show the Winter Olympics and Super Bowl.

By The Associated PressMarch 7, 2017 GMT

The cast of "Will & Grace" has given fans a behind-the-scenes glimpse at production of the series' revival.

Debra Messing, Eric McCormack, Sean Hayes and Megan Mullally shared images on social media over the weekend from the set of the NBC sitcom.

Messing shared a selfie of the group with the caption, "Yeah, this weekend was a little fun." Hayes described returning to his role as "just like riding a bike."

Series creators Max Mutchnick and David Kohan are aboard as executive producers, and series director James Burrows also will be back, NBC said.

By The Associated PressDecember 9, 2016 GMT

A one-off election edition episode of "Will & Grace" may have sparked interest in a revival of the NBC series.

The original cast reunited for a 10-minute episode released online in September that urged voters to back Hillary Clinton in the presidential election. The episode has been viewed more than 6.5 million times since.

LOS ANGELES (AP) — The stars of "Will & Grace" are back together in a video that delivers punchlines and a political message: Vote for Hillary Clinton.