Ahead of the election, a landslide of documentaries

NEW YORK (AP) — The election has unleashed an avalanche of documentaries like no season before it.

Dozens of films, exploring issues from gerrymandering to white supremacists, have sought...

LOS ANGELES (AP) — What if alternative energy isn't all it's cracked up to be? That's the provocative question explored in the documentary "Planet of the Humans," which is backed and promoted by...

Michael Moore: Singleton was a pioneer 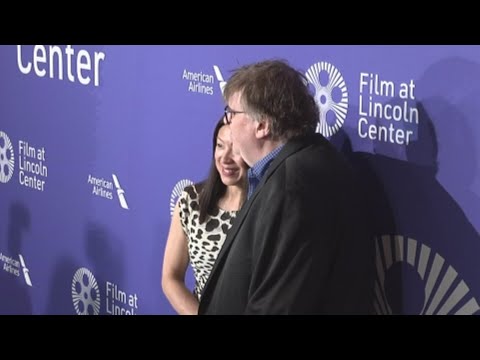 Kenan Thompson on Smollett: ‘I wish I knew what the truth was.’ 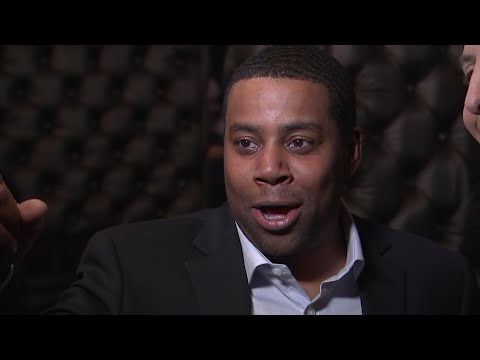 ‘Black Panther,’ ‘A Star Is Born’ get Writers Guild noms

LOS ANGELES (AP) — The scripts for "Black Panther" and "A Star Is Born" are among the five films that have been selected to compete for best adapted screenplay at the Writers Guild of America Awards. The two blockbusters will compete against "BlacKkKlansman," ''Can You Ever Forgive Me?" and "If Beale Street Could Talk."

LIBERTY, Mo. (AP) — A Kansas City man has been sentenced to 30 years in prison for the shotgun killing of another man.

Kevin Michael Moore was sentenced earlier this month for the January shooting death of Jacob Wood in Gladstone.

The Kansas City Star reports prosecutors said Moore drove to a Gladstone house after he called a woman and overheard Wood yelling at her. He was armed with a shotgun when he confronted Wood.

FORT LAUDERDALE, Fla. (AP) — Thirteen years ago, mail bomb suspect Cesar Sayoc traveled the country leading a mixed-race troupe of male exotic dancers — he ran scams and had a temper, but a fellow dancer who is African-American said he never expressed racism or homophobia.

CHARLOTTE, N.C. (AP) — A historian says the Carolina Panthers home stadium is the site of an early 20th Century lynching.

The Charlotte Observer reported Friday that the lynching occurred in 1913 where the Bank of America Stadium now stands in Charlotte, North Carolina.

NEW YORK (AP) — A trio of wide-releases sputtered while the gothic family fantasy "The House With a Clock in Its Walls," starring Jack Black and Cate Blanchett, ticked its way to a weekend-best $26.6 million in ticket sales, according to final box-office figures Monday.

The Universal Pictures release, produced by Steven Spielberg's Amblin Entertainment, exceeded industry expectations on a weekend that was otherwise littered with disappointments.

‘House With a Clock in Its Walls’ ticks to No. 1 in theaters

NEW YORK (AP) — The gothic family fantasy "The House With a Clock in Its Walls" exceeded expectations to debut with an estimated $26.9 million in ticket sales at the weekend box office, while audiences showed considerably less interest in Michael Moore's Donald Trump-themed documentary, "Fahrenheit 11/9," than his George W. Bush-era one.

Moore: ‘Trump voters are welcome back’ 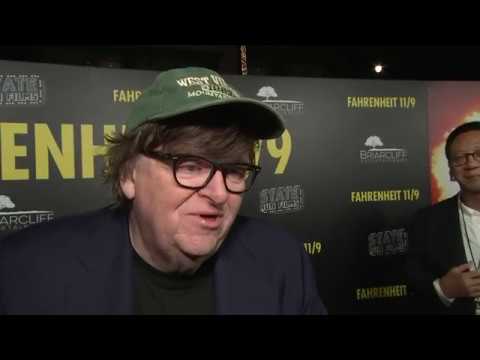 "I hope he never does one on me," Donald Trump once said of Michael Moore.

It was in 1998, on Roseanne Barr's syndicated talk show. Trump complimented Moore's "Roger & Me," a takedown of General Motors and its then-CEO, Roger Smith. "It's terrific," he said, then added he hoped never to be a similar target. Everybody laughed.

Jane Fonda to be honored at Traverse City Film Festival

Moore announced Thursday that the actress, author and political activist will be honored during the 14th annual Traverse City Film Festival, which runs from July 31 to Aug. 5.

Details of her appearance and this year's film and event schedule will be announced June 29.

CHARLESTON, W.Va. (AP) — A Twitter spat has broken out between the West Virginia Republican Party chairwoman and a Democratic candidate for Congress that ended up with her questioning him for collecting a military pension.

Trump tweets: "While not at all presidential I must point out that the Sloppy Michael Moore Show on Broadway was a TOTAL BOMB and was forced to close. Sad!"

Trump criticized the liberal activist on Saturday, several days after Moore's one-man show, "The Terms of My Surrender," concluded its limited Broadway run on Oct. 22.

Michael Moore: we need to ‘create a world without Harveys’

MONTGOMERY, Ala. (AP) — The U.S. Department of Justice announced Thursday that it will not pursue charges against an Alabama police officer who shot and killed a 19-year-old during a traffic stop.

NEW YORK (AP) — Things may look bleak for Democrats these days, but Michael Moore thinks he knows how they can get back on top.

"Humor is the non-violent weapon by which we're going to help turn this around," said the Academy Award-winning director of "Bowling for Columbine" who is currently starring in his one-man Broadway show.

"If you use your sense of humor and your wit to go against what's going on, it can be devastating and it can reach a lot of people."

Michael Moore leads patriotic procession through New York after making Broadway debut in his one-man show, ‘The Terms of My Surrender’

TRAVERSE CITY, Mich. (AP) — The University of Michigan College of Literature, Science and the Arts is serving as an educational sponsor at the 13th annual Traverse City Film Festival.

The festival founded by Oscar-winning documentary director Michael Moore gets underway Tuesday and continues through Sunday. More than 100 movies will be shown in venues around the northern Michigan town.

It will feature the debut of two short films written, produced and directed by University of Michigan students.

Michael Moore donates $10,000 to Shakespeare in the Park

NEW YORK (AP) — Filmmaker Michael Moore, who is making his Broadway debut this summer in a solo show, says he will donate $10,000 to New York City's Shakespeare in the Park after it lost funding from sponsors due to its controversial "Julius Caesar" production.

Moore says he's donating the money — his advance pay for the show "The Terms of My Surrender" — to the Public Theater program after corporate sponsors Bank of America and Delta pulled their sponsorship of "Julius Caesar."

TRAVERSE CITY, Mich. (AP) — Oscar-winning filmmaker Michael Moore won't be around for a Michigan film festival that he founded but the show will go on.

Moore has announced the lineup for the 13th annual Traverse City Film Festival, which runs from July 25-30. It will include 117 feature films and other events.

Moore usually makes personal appearances at the festival. But this year, he'll be in New York for his one-man Broadway show called "The Terms of My Surrender."

CANNES, France (AP) — Michael Moore is making a documentary about Republican President Donald Trump and says the president should be worried.

Producers Harvey and Bob Weinstein announced Tuesday that they have secured worldwide rights to the film, which Moore had dubbed "Fahrenheit 11/9." The name is taken from the day after the Nov. 8 election when Trump was declared the president-elect and is a reference to Moore's 2004 President George W. Bush documentary "Fahrenheit 9/11."

Michael Moore to take on Trump on Broadway this summer

The Academy Award-winning director of "Bowling for Columbine" will perform the one-man show "The Terms of My Surrender" at the Belasco Theatre starting July 28 for 12 weeks.

By The Associated PressMarch 8, 2017 GMT

NEW YORK (AP) — The 16th Tribeca Film Festival will close with a "Godfather" cast reunion and a back-to-back screening of parts one and two of Francis Ford Coppola's classic saga.

Tribeca announced Wednesday that the 45th anniversary screenings will be followed by a conversation with Coppola, Al Pacino, Diane Keaton, Robert Duvall, James Caan and Talia Shire. Robert De Niro, co-founder of the festival, naturally, will also join the April 29 event, to be held at Radio City Music Hall.

The Grand Rapids Press reports (http://bit.ly/2lkc67n ) the Flint native says he's looking for a spirited film-lover who believes in the importance of experiencing movies in a theater atmosphere.

NEW YORK (AP) — The Latest on the pre-inauguration demonstration by actors and others in New York (all times local):

City mayors, actors and hundreds of New Yorkers have gathered outside a Donald Trump building for a pre-inauguration demonstration.

Review: Loach film is a searing call for humanity, decency

Just like a Michael Moore documentary, there's nothing subtle about a Ken Loach drama.

The 80-year-old British director and social critic has long been an ardent, insistent, eloquent champion of the more vulnerable members of society — particularly working-class folks who are trying to do the right thing but just can't catch a break. Whether he's exploring homelessness, poverty or other social ills, Loach's arguments, and emotions, are always crystal clear.

NEW YORK (AP) — Tens of thousands of people marched in streets across the United States on Saturday, staging the fourth day of protests of Donald Trump's surprise victory as president.

The protests — held in big cities such as Los Angeles, New York and Chicago as well as smaller ones, such as Worcester, Massachusetts, and Iowa City, Iowa — were largely peaceful Saturday, although two police officers were slightly injured during protests in Indianapolis.

Trump may revisit Trump Country during a victory tour

NEW YORK (AP) — Donald Trump may take a victory tour to states that elected him president, an aide said Saturday, as boisterous protests unfolded outside the tower where he holed up with members of his transition team and fielded calls congratulating him.

Moore debuted "Michael Moore in TrumpLand" in New York on Tuesday night in front of an audience of his fans.

According to The Hollywood Reporter, the film features Moore speaking about both Republican nominee Donald Trump and Democratic candidate Hillary Clinton on stage earlier this month in Wilmington, Ohio, a hotbed of Trump support.

COLUMBUS, Ohio (AP) — Documentary filmmaker Michael Moore says he's not allowed to perform a one-man show about the presidential race at a central Ohio theater because officials there consider him too controversial.

Moore says in a Facebook post that Newark's Midland Theatre "banned" him from presenting and filming the show there next month. He says the community board overseeing the theater recently voted not to allow the show.

LOS ANGELES (AP) — Filmmaker Michael Moore is causing a stir with his comments about Donald Trump. The famously liberal Moore says he's sorry to say it, but he thinks the Republican could win the presidency.

In a Wednesday night appearance on an online edition of HBO's "Real Time with Bill Maher," Moore said he thought the verbal attacks on Democratic presidential candidate Hillary Clinton at this week's Republican National Convention play to "a lot of people" Trump has...

MOBILE, Ala. (AP) — Supporters of the family of a 19-year-old man shot and killed by a Mobile police officer are calling for criminal charges against the officer and for Mayor Sandy Stimpson to remove himself from a police citizens advisory council selection process.

AL.com (http://bit.ly/29SlVs8) reports that in her first public comments since her son Michael Moore's shooting, Shunta Daugherty continued to question Tuesday the whereabouts of the weapon police say her...