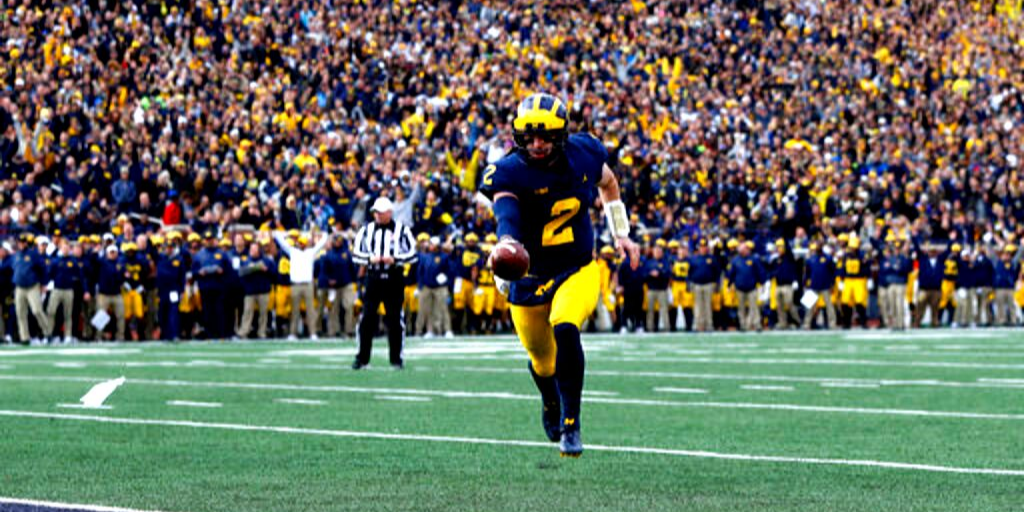 ANN ARBOR, Mich. (AP) — Michigan Stadium’s lone tunnel — the site of altercations between players as they enter and exit the field — will be a little wider next season.

The school confirmed Monday that it will remove a portable section of seats from the front of the tunnel to give players, coaches and staff members more room to enter and exit the football field.

Brown reached 20-plus points for the third straight game — and Michigan scored 80-plus in each of those Big Ten contests.

Air Force became the first team to win the national rushing title three straight seasons since Navy did it four years in a row from 2005-08, Tennessee had the lowest total offense average for a national leader in 20 years, and Texas A&M gave up the most yards ever by a pass defense leader.

ANN ARBOR, Mich. (AP) — Michigan All-America running back Blake Corum is staying in school for his senior season and putting his professional football dreams on hold.

No. 1 Georgia faces No. 3 TCU for CFP national championship

TCU’s Demercado gets to wrap up collegiate career at home

The son of one of the NFL’s most prolific running backs made quite a name for himself this bowl season.

Southern Mississippi’s Frank Gore Jr. rushed for 329 yards – the most in any bowl game ever – to lead the Golden Eagles to a 38-24 LendingTree Bowl victory over Rice.

Expanded CFP will mean even longer seasons for title teams

By The Associated PressJanuary 4, 2023 GMT

With the 12-team playoff expansion approved for 2024, teams that make it to the national championship game will be facing even longer seasons.

FORT WORTH, Texas (AP) — Big right guard Wes Harris and his TCU teammates are hearing again just how big and physical their next opponent is and how much of an underdog they are against Georgia in the national championship game.

The most competitive pair of semifinals in the nine-year history of the College Football Playoff drew the largest non-New Year's Day viewership for those games on ESPN, the network said Monday.

GLENDALE, Ariz. (AP) — TCU thought so much of Max Duggan at the beginning of the season that he lost his job. Georgia seemed like it spent years trying to give its starting quarterback job to anyone not named Stetson Bennett.

PASADENA, Calif. (AP) — The sun usually sets behind Arroyo Seco late in the third quarter of the Rose Bowl. The moment is often spectacular, with clouds turning pink and orange while the San Gabriel Mountains light up in dazzling reds and yellows amid the dying rays.

TCU’s defense holds on in Fiesta Bowl win over Michigan

When the Fiesta Bowl turned into a touchdown party, the Horned Frogs kept the lights on just long enough to earn a chance to play for their first national championship since 1938.

The Horned Frogs are headed to Sofi Stadium in Inglewood, California, about 10 miles from Hollywood, just about the perfect place to end a storybook season for the most improbable College Football Playoff team.

Before the shootout, Michigan rues missed 1st half chances

GLENDALE, Ariz. (AP) — J.J. McCarthy had the corner stall, right next to the exit of Michigan's locker room. So as his teammates slowly got dressed and left — one after the other — the quarterback embraced each with tears in his eyes.

By The Associated PressJanuary 1, 2023 GMT

TCU brings ‘fight for credibility’ to CFP against Michigan

SCOTTSDALE, Ariz. (AP) — A day before facing off in the College Football Playoff, TCU's Sonny Dykes and Michigan's Jim Harbaugh talked fondly about the fathers they followed into coaching and a time when they might have shared more than a stage for one final pregame press conference.

The CFP semifinalists and the NIL collectives that back them

Two days before Christmas, University of Michigan President Santa Ono tweeted out a statement from athletic director Warde Manuel, informing Wolverines fans how they can help athletes they cheer for cash in on their fame while playing college sports.

ANN ARBOR, Mich. (AP) — Mimi Bolden-Morris had a trailblazing season at Michigan, becoming what is believed to be the first female graduate assistant football coach at a power conference school since the late 1980s.

SCOTTSDALE, Ariz. (AP) — TCU's Garrett Riley seemed destined to follow his big brother into coaching when he walked on to the Texas Tech football team as a player.

Michigan's Sherrone Moore's path to the profession was not quite so straight forward, but by the time he was done playing he was confident coaching was his calling.

The first-year TCU coach later said he was actually trying to pay the SEC a compliment.

Confident Edwards a key cog for Michigan at Fiesta Bowl

SCOTTSDALE, Ariz. (AP) — Donovan Edwards speaks of his abilities on a football field with the confidence of someone claiming water is wet.

The other Michigan running backs, seated at a table next him, don't even glance in his direction when he says it.

It has been a wild, four-year ride at TCU for quarterback Max Duggan.

He needed unexpected heart surgery before his sophomore year and played most of last season with a broken bone in his foot.

ATLANTA (AP) — Stetson Bennett wouldn't allow himself to bask so long in the celebration following last season's national championship that it would be more difficult to make a run at a repeat title this year.

ATLANTA (AP) — More than one month later, Ohio State players still can't seem to shake their one loss of the season.

Even though they're playing for a shot at the national championship in the Peach Bowl's College Football Playoff semifinal against No.

SCOTTSDALE, Ariz. (AP) — Michigan defensive tackle Mazi Smith said Wednesday he was in the process of applying for a concealed-weapon permit when a traffic stop earlier in the year led to him being charged with felony gun possession.

“We see that they have a pretty huge O-line,” Horned Frogs linebacker Dee Winters said Tuesday.

SCOTTSDALE, Ariz. (AP) — Tre'Vius Hodges-Tomlinson knows a good cornerback when he sees one — no matter if the school's three letters are ULM or TCU.

So when he heard that the Horned Frogs were looking to add Louisiana-Monroe transfer Josh Newton, the first-team AP All-America cornerback immediately wanted to see if the new guy could make the jump from the Sun Belt Conference to the Big 12.

FORT WORTH, Texas (AP) — Sonny Dykes was nearing the end of a season as an off-field offensive analyst, and pondering his next move.

Fired from his previous head coaching job and with three young kids at home, the son of longtime college coach Spike Dykes even considered a career change after more than two decades in football.

COLUMBUS, Ohio (AP) — During C.J. Stroud’s second trip to New York in as many years as a Heisman Trophy finalist, he noticed his picture on some of the billboards in Times Square and took a moment to reflect.

ANN ARBOR, Mich. (AP) — Standout Michigan center Olu Oluwatimi had a season that was even better than his dreams.

FORT WORTH, Texas (AP) — TCU quarterback and Heisman Trophy runner-up Max Duggan will skip his available extra season with the third-ranked Horned Frogs and make himself eligible for the NFL draft after the College Football Playoff.

TCU's Sonny Dykes was named The Associated Press Coach of the Year on Monday after leading the No. 3 Horned Frogs to the College Football Playoff in his first season with the school.

Dykes received 37 of 46 first-place votes and 120 points from AP Top 25 voters to become the second TCU to win the award, which is presented by Regions Bank.

Don’t look now but it’s bowl season! 42 picks for them all

The bowl season is now three years removed from the last time every postseason game was played.

The pandemic whittled the 2020 bowl season down to a shell.

NEW YORK (AP) — After Caleb Williams won the Heisman Trophy, becoming the eighth player to do so for Southern California, he talked about how cool it will be to have his jersey retired at the school one day and to be able to take his place with other USC greats.

By The Associated PressDecember 9, 2022 GMT

Brady Drogosh went out in style.

And this time, he'll be more than an adviser.

By The Associated PressDecember 8, 2022 GMT

He ended his high school career as a two-time champion.

After leading King to a Division 3 state title over DeWitt last season, he led a rout of Muskegon his senior season to repeat.

ANN ARBOR, Mich. (AP) — Michigan defensive lineman Mazi Smith pleaded guilty to a misdemeanor Thursday, a week after he was charged with a felony for possessing a gun in his pickup truck without a concealed-weapon permit.

LOUISVILLE, Ky. (AP) — Louisville is finalizing a deal to hire Purdue’s Jeff Brohm as its head coach, a person with knowledge of the situation told The Associated Press on Wednesday.

The person spoke on condition of anonymity because the agreement and an announcement from the schools had not been finalized.

Tim Kloska’s performance in Grand Rapids West Catholic’s five-game playoff run alone — rushing for 1,145 yards and 19 touchdowns — might have been enough for him to garner all-state consideration.

The racial gap in graduation rates for this year’s bowl teams in college football has declined again, this time to the smallest difference in the history of a study examining the data.

The Institute for Diversity and Ethics in Sport (TIDES) at Central Florida reported Wednesday that the overall Graduation Success Rate (GSR) for bowl-bound teams in 2022 has reached an all-time high of 83%.

SCOTTSDALE, Ariz. (AP) — TCU had done nearly all it could to complete a massive turnaround under first-year coach Sonny Dykes, putting itself in position to secure a spot in the College Football Playoff.

Utah, Penn State will meet for first time in the Rose Bowl

LOS ANGELES (AP) — It's rare in college football that teams can reach a first milestone and possibly a last one as well in the same game. Yet, that's the situation Utah and Penn State will find themselves in for the Rose Bowl.

CFP: Georgia vs Ohio St in Peach; Michigan vs TCU in Fiesta

For this college football season, the BCS probably would have been fine.

Two days after the College Football Playoff announced it is expanding to 12 teams, the field of four to determine this season’s national champion included two schools that did not even win their conferences.

No. 2 Michigan faces No. 3 TCU in College Football Playoff

By The Associated PressDecember 4, 2022 GMT

Georgia, Michigan, TCU and Ohio State were the top four in the final Associated Press college football poll of the regular season.