ATLANTA (AP) — The shadow of two nuclear reactors that Georgia Power Co. is building near Waynesboro hangs over two statewide elections for the Georgia Public Service Commission. Although the...

ATLANTA (AP) — A pair of new high-profile endorsements are adding fuel to an already contentious special election for a U.S. Senate seat in Georgia.

ATLANTA (AP) — Georgians will get to vote on whether to make it easier to sue the state and local governments under a proposed constitutional amendment given final passage Tuesday by the state...

ATLANTA (AP) — Gov. Brian Kemp is appointing a district attorney to the bench in a two-county judicial circuit east of Atlanta.

Kemp announced Thursday that he was naming Layla H. Zon to a...

Justice Keith Blackwell, 44, said in a letter to Gov. Brian...

Georgians could vote on making it easier to sue governments

ATLANTA (AP) — Georgians could get a chance to vote on making it easier to sue state government under a constitutional amendment moving forward in the General Assembly.

ATLANTA (AP) — As part of his anti-gang push, Georgia Gov. Brian Kemp on Thursday said he wants prosecutors to be able to charge crimes across multiple counties and to be able to seek the death...

ATLANTA (AP) — U.S. Supreme Court Justice Clarence Thomas is scheduled to be the keynote speaker at the dedication of Georgia's new judicial center.

ATLANTA (AP) — Georgia’s governor has appointed a Gwinnett County woman to the state Board of Regents, which oversees Georgia’s public colleges and universities.

DECATUR, Ga. (AP) — A Georgia sheriff who publicly exposed himself to a police officer at an Atlanta park has announced that he’s leaving office.

Deal to serve as distinguished professor at Mercer

News outlets report that Deal will serve as the Distinguished University Professor of Government at Mercer...

ALBANY, Ga. (AP) — An appeals judge in Georgia was found Saturday shot dead behind his Albany home, but officials do not believe it was a homicide.

Burchett beat out Franklin Patten on Tuesday in the...

ATLANTA (AP) — A 'religious liberties' bill that aims to add greater protections for personal beliefs has renewed a recurring debate in Georgia about discrimination and religious...

ATLANTA (AP) — Two Republicans are headed to a March 12 runoff in a special election to fill a south Georgia House seat.

The seat became available in November when Rep. Jason Shaw was appointed to the Georgia Public Service Commission by former Gov. Nathan Deal.

ATLANTA (AP) — The coming days in the Georgia legislature are all about one, all-encompassing proposal: the state budget.

While the state House and Senate will not hold floor sessions, many lawmakers will return to the Capitol on Tuesday — after a the long holiday weekend in honor of the Rev. Martin Luther King Jr. — for joint budget hearings. That's where they'll hash out the amended budget for fiscal year 2019 and general budget for fiscal year 2020, which begins July 1.

Health care IT company plans to relocate HQ to Georgia

MARIETTA, Ga. (AP) — A California health care IT company plans to relocate its headquarters to Georgia in a move that may create or move 500 jobs to the metro Atlanta area.

Gov. Nathan Deal's office said Thursday that BioIQ will invest $5 million as part of its expansion in Cobb County. The Atlanta Journal-Constitution reports the new jobs will include positions in operations, sales and technology.

Outgoing governor to teach at UGA, other schools

ATLANTA (AP) — The outgoing governor of Georgia will soon have another title: Professor.

The Atlanta Journal-Constitution reports the state's Board of Regents voted Wednesday to appoint Georgia Gov. Nathan Deal as a Regents Professor. Deal will hold occasional lectures at the University of Georgia and other schools in the University System of Georgia, effective March 1 for at least three years.

PEACHTREE CORNERS, Ga. (AP) — Officials say a shipping company will expand its operations near Atlanta with $5.5 million and more than 350 new jobs.

News outlets report Hapag-Lloyd is consolidating at its offices in Peachtree Corners, and plans to invest the money over the next two years and create 363 positions.

The company plans to build a new headquarters campus with 750,000 square feet (69,600 square meters) of office space in the city's Midtown area, according to records from Atlanta's economic development authority.

ATLANTA (AP) — Schools, government offices and some businesses are delaying their openings Tuesday because of potential slippery conditions.

Georgia Gov. Nathan Deal on Monday announced that state government wouldn't open until 10 a.m. Tuesday. He said the delay was based on a National Weather Service update that warned that overnight temperatures below freezing could leave black ice on the roads in several dozen Georgia counties.

CRAWFORDVILLE, Ga. (AP) — A Georgia-based poultry producer is expanding with a new facility planned for the state's smallest county.

Kemps' transition office announced his legislative floor leaders in a news release. Republican state Reps. Jodi Lott of Evans, Terry Rogers of Clarkesville, Bert Reeves of Marietta and Dominic LaRiccia of Douglas will sponsor bills to carry out the new GOP governor's agenda in the House.

SAVANNAH, Ga. (AP) — An online retailer of furniture and home decor says it plans to bring 1,000 jobs to coastal Georgia.

Gov. Nathan Deal's office said Wayfair Inc. plans to build a new facility exceeding 1 million square feet (90,000 sq. meters) in Savannah. About $45 million is expected to be invested in the project within the next five years.

The Boston-based company said new jobs will include supervisory, administrative and warehouse positions.

JEFFERSON, Ga. (AP) — A South Korean company plans to create more than 2,000 jobs as it builds a battery plant in Georgia.

Gov. Nathan Deal said in a news release Tuesday that SK Innovation plans to spend up to $1.7 billion on a plant to make lithium-ion batteries for hybrid electric vehicles at the plant in Jackson County. The governor's statement said it's the largest single investment and job creation project in Georgia's history.

Georgia lawmakers' five-day special session has ended with the Senate giving final approval to a tax break that will save airlines $40 million before the perk expires next summer.

ATLANTA (AP) — Georgia lawmakers have given final approval to $470 million in emergency aid and tax credits for communities devastated by Hurricane Michael.

The state Senate voted unanimously Saturday on bills that cleared the House earlier this week. The spending measures now go to Gov. Nathan Deal to sign into law.

ATLANTA (AP) — Georgia lawmakers are preparing to finalize $470 million in emergency aid and tax credits for victims of Hurricane Michael as well as a $40 million tax break for airlines in a final round of votes Saturday.

The Georgia legislature is poised to finalize $470 million in emergency aid and tax credits for victims of Hurricane Michael as well as a $40 million tax exemption on jet fuel in a final round of votes Saturday.

The state Senate will meet Saturday morning for floor votes on the proposals, which have already passed the House.

ATLANTA (AP) — The Georgia House voted Thursday to give a second chance to a $40 million tax exemption on jet fuel that lawmakers defeated months earlier in a spat over gun rights with Delta Air Lines.

The tax break for airlines passed the House 141-18 on the third day of a special legislative otherwise focused on aid to the large swath of southern Georgia devastated by Hurricane Michael.

ATLANTA (AP) — The Georgia House overwhelmingly approved $470 million in emergency aid and tax credits Thursday to help communities devastated by Hurricane Michael, citing a dire need for help with ruined cotton fields and shattered timberland across a broad swath of the state.

ATLANTA (AP) — The Latest on the Georgia legislature (all times local):

A $40 million tax break on jet fuel is getting a second chance in the Georgia legislature, having easily passed the state House.

$470M in hurricane relief heading to vote in Georgia House

ATLANTA (AP) — The Georgia House is expected to vote Thursday on proposals for $470 million in relief for damage from Hurricane Michael as lawmakers work rapidly to resolve a special session called by Gov. Nathan Deal.

ATLANTA (AP) — The Georgia House speaker questioned the need for renewing a $38 million tax break for Delta Air Lines and other carriers as state lawmakers reconvened Tuesday for a special legislative session called by the governor.

The speaker of the Georgia House is predicting a "tough climb" ahead for a proposed tax break on jet fuel that's once again before lawmakers.

ATLANTA (AP) — In a frantic search by phone and on foot, volunteers have been trying to find ballots that could help Democrat Stacey Abrams close the gap against Republican Brian Kemp in Georgia's unresolved race for governor.

Volunteers track down Georgia voters by phone and on foot

ATLANTA (AP) — Volunteers spread out Friday trying to find any ballots that could help Democrat Stacey Abrams close the gap against Republican Brian Kemp in their unsettled, too-close-to-call race for Georgia governor.

Kemp made his announcement in the governor's office of the Georgia Capitol, standing beside the man he plans to replace in January. Republican Gov. Nathan Deal called Kemp "the governor-elect" and both said they would begin transition work together.

SAVANNAH, Ga. (AP) — Ted Metz may not get many votes in the Georgia governor's race, but the Libertarian candidate is on the ballot, raising the possibility that no one else will get to declare victory on Election Day either.

Republican Brian Kemp and Democrat Stacey Abrams are in the home stretch of a closely watched race to succeed term-limited GOP Gov. Nathan Deal, and polls have consistently shown the rivals running neck and neck.

ATLANTA (AP) — Georgia Gov. Nathan Deal has called a special session of the state legislature to grapple with the recovery costs from Hurricane Michael.

The Atlanta Journal-Constitution reports that the governor's office expects the state's portion of cleanup costs to be approximately $100 million.

Deal announced on Monday that the deadline for registering to participate in the Nov. 6 midterm election would be extended to Oct. 16 for residents of Clay, Grady, Randolph, and Turner counties. 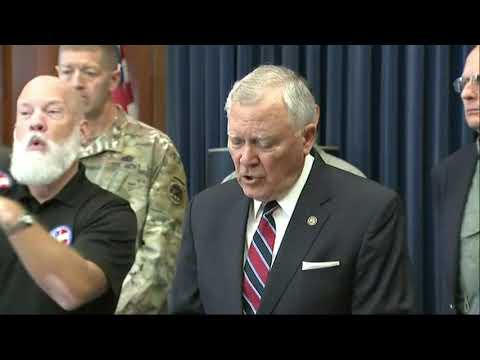 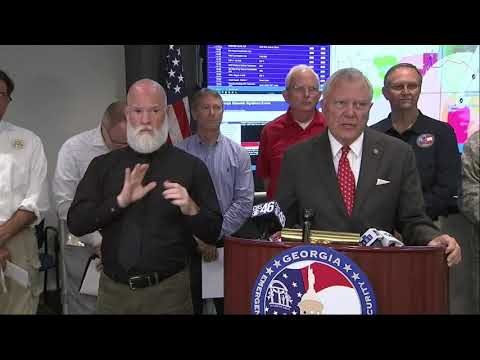 ATLANTA (AP) — Emergency officials in Georgia are monitoring Hurricane Michael, expected to come ashore on the Florida Panhandle before moving into southern Georgia.

Gov. Nathan Deal has issued a state of emergency for 92 of the state's 159 counties.

A hurricane warning is effect in southwestern Georgia. A tropical storm warning is in effect for the entire Georgia coast, as well as much of the inland areas.

ATLANTA (AP) — Georgia Gov. Nathan Deal has issued an emergency declaration for much of the state as Hurricane Michael barrels closer to a likely landfall in Florida.

The National Weather Service said Tuesday that wind gusts as high as 60 mph (97 kph) will be possible across parts of central Georgia, with the strongest winds south of Columbus and Macon.

By The Associated PressOctober 5, 2018 GMT

ATLANTA (AP) — A new justice has been sworn in to sit on the Georgia Supreme Court.

A news release from the high court says Charlie Bethel was sworn in Tuesday morning by Gov. Nathan Deal in the House chamber of the state Capitol. Bethel was elevated to the high court from a seat on the Georgia Court of Appeals, the state's intermediate appellate court.

Army contract for cyber training to bring 50 jobs to Georgia

AUGUSTA, Ga. (AP) — A cyber consulting company is expected to bring 50 jobs to Georgia as part of a contract to provide training to the Army.

Gov. Nathan Deal's office said in a news release that BurningCastle LLC has been awarded an Army contract to provide information technology and logistics training at Fort Gordon in Augusta. The Army post was recently designated the new home of the Army's Cyber Command.