LONDON (AP) — Simon Haydon, who shaped The Associated Press’ coverage of World Cups and Olympics as international sports editor and reported on landmark news events while traveling the world as a...

Romanian midwife championed in Britain as homeland in crisis

Anghel, an experienced Romanian midwife, has joined the star-studded ranks of people whose portraits have...

BUCHAREST, Romania (AP) — Former Romanian President Ion Iliescu is to be tried for crimes against humanity for his role in the country's bloody 1989 anti-communist uprising, Romania's top...

BUCHAREST, Romania (AP) — Eugeniu Iordachescu, a Romanian civil engineer who devised an ingenious way to save 12 churches and many other historic buildings from being destroyed by the country's former Communist strongman, has died. He was 89.

He died Friday from a heart attack and his funeral was being held Sunday, his daughter-in-law, Ligia Iordachescu, told The Associated Press. 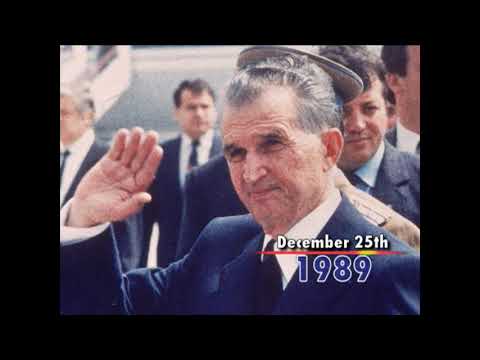 BUCHAREST, Romania (AP) — Romanians are demanding more democracy at an anti-government march to commemorate the victims of the country's 1989 anti-communist revolt.

Protesters gathered Saturday outside government offices in Bucharest carrying candles and Romanian flags before marching to Revolution Square, where late Communist leader Nicolae Ceausescu fled in a helicopter as crowds demanded his ouster.

The sale came about after the vehicle was confiscated from businessman Ovidiu Tender, currently serving a 12-year sentence for fraud and money laundering.

BUCHAREST, Romania (AP) — Claims by the leader of Romania's ruling party that he was the target of a failed assassination attempt have sparked wide debate in the country.

Liviu Dragnea told Antena 3 late Tuesday that four foreigners had come to Bucharest for the April 2017 assignment, but had been thwarted. He suggested that billionaire philanthropist George Soros was behind the attempt.

My Life as a Spy _ under surveillance in communist Romania

BUCHAREST, Romania (AP) — Romanian secret police agents eavesdropped on her, persuaded friends to snoop on her and filmed her when she was in her underwear.

Some 70 informants and spies kept tabs on Katherine Verdery, now an anthropology professor at The Graduate Center of the City University of New York, when she visited communist Romania in the '70s and '80s as a postgraduate doing research on an anthropology thesis on Romanian village life.

BUCHAREST, Romania (AP) — Former Romanian President Ion Iliescu has appeared at court to face charges of crimes against humanity for his role in the country's bloody anti-communist revolution.

The charges refer to a five-day period when Iliescu seized power after former Communist leader Nicolae Ceausescu fled Bucharest on Dec. 22, 1989. Ceausescu and his wife were summarily tried and executed on Dec. 25. Some 1,100 people died during the revolt, the vast majority after Ceausescu's ouster.

BUCHAREST, Romania (AP) — Doina Cornea, a Romanian anti-communist dissident who was beaten and arrested after criticizing the destruction of Romanian villages and churches during the regime of Nicolae Ceausescu, has died. She was 88.

Her son, Leontin Juhasz, said Cornea died overnight Thursday at her home in the northwestern city of Cluj after a long illness.

BUCHAREST, Romania (AP) — Romanian prosecutors on Tuesday formally indicted former President Ion Iliescu for crimes against humanity over his role in deaths that occurred during the anti-communist revolution.

Iliescu, 88, appeared at the general prosecutor's office to hear the charges against him. He didn't comment.

Iliescu came to power during the 1989 revolt in which Communist leader Nicolae Ceausescu was toppled and executed.

Under communism, Stanescu made fun of Ceausescu's policy of exporting Romanian produce to pay off its foreign debt. In 1982, he won a prize in Japan that protected him from possible persecution at home.

Leader: Romanian ex-president can be charged for 1989 deaths

BUCHAREST, Romania (AP) — Romania's president on Friday approved a request to prosecute a former president and prime minister on charges of crimes against humanity for their roles in the country's bloody anti-communist revolution.

BUCHAREST, Romania (AP) — Romania's general prosecutor has requested that a former president and prime minister be charged with crimes against humanity for their roles in the country's bloody anti-communist revolution.

BUCHAREST, Romania (AP) — Romanian police say they are investigating the "suspicious" death of a well-known journalist who was found dead in his home near the Romanian capital.

His body was found in the bathroom of his home in Voluntari, a suburb just north of Bucharest.

BUCHAREST, Romania (AP) — A Romanian auction house on Wednesday sold memorabilia belonging to former Communist dictator Nicolae Ceausescu to mark what would have been his 100th birthday.

The "Golden Era" online auction included some 250 items, like a fur-lined hunting cap worn by Ceausescu, an avid hunter, which sold for 400 euros ($500).

Petru Neghiu, a general in reserve, told Antena 3 TV, that Vlad died Saturday, following an illness. Neghiu says Vlad made confession to a priest shortly before his death.

BUCHAREST, Romania (AP) — Tudor Postelnicu, a Romanian politician who headed the country's secret police and suppressed dissent as a top aide of former leader Nicolae Ceausescu, has died, his wife said Sunday. He was 86.

Maria Postelnicu told Digi24 her husband died Saturday, weeks after he was admitted to a military hospital in the Romanian capital with breathing problems.

After the monarchy was abolished at the end of WWII, the communists confiscated the royal rifle. Decades later it came into Ceausescu's possession, and his name was engraved on it.

In the predominantly Christian Orthodox country of 19 million, age-old crafts such as intricate egg decorating and painted religious icons are a major feature of the Holy Week run-up to Easter Sunday. But a more commercial flavor has slowly crept into the celebrations.

BUCHAREST, Romania (AP) — Several thousand people including Orthodox priests have marched through the Romanian capital and other cities to express their opposition to abortion and their support for family life.

Members of anti-abortion groups gathered in a park in southern Bucharest on Saturday and marched, shouting slogans such as "Life!" They handed out colored balloons carrying messages such as "Every child is an angel coming into the world," and "Women deserve more than abortion."

BUCHAREST, Romania (AP) — A spontaneous display of "people power" in the capital Bucharest and cities throughout Romania has for the moment slowed a government push to decriminalize some forms of corruption committed by public officials. The confrontation has seen the largest protests since the 1989 revolution that ended the regime of communist dictator Nicolae Ceausescu. Here is a look at the situation and the issues:

BUCHAREST, Romania (AP) — After mass protests that have rocked the country for days, Romania's government announced Saturday that it will repeal a highly controversial emergency decree that decriminalizes official misconduct.

Prime Minister Sorin Grindeanu said the government would hold an emergency meeting Sunday to withdraw the decree, which has sparked the biggest protests in Romania since the end of communism in 1989.

Romanian PM tries the tieless look ahead of a national vote

BUCHAREST, Romania (AP) — The Romanian prime minister's tieless look has become a talking point before the parliamentary election, applauded by some, but also a reason for disapproval in the conservative Eastern European country.

Dacian Ciolos, is the first prime minister, after Petre Roman, a university professor who played a key role in Romania's 1989 revolution, to provoke public debate for not wearing a tie in formal public appearances.

Tyson, 50, was surrounded by dozens of journalists on Wednesday as he toured the palace, which houses the parliament. Despite being flanked by U.S. and Romanian security personnel, Tyson struggled to move at times because of the swarm.

Romania: 4 to stand trial for 1985 death of dissident

BUCHAREST, Romania (AP) — Four former communist officials, including the former chief of the feared Securitate secret police, will stand trial for the death of a dissident in prison under the regime of former leader Nicolae Ceausescu, Romanian military prosecutors said Monday.

Gheorghe Ursu died two months after being arrested in 1985, after allegedly being beaten repeatedly by interrogators and inmates on the orders of the Securitate secret police. They claimed he had...

BUCHAREST, Romania (AP) — Bucharest was once known as "Little Paris of the East." But English, not French, is the preferred foreign language in Romania's capital city, and 96 percent of its inhabitants are native Romanians.

Bucharest buzzes with an energetic, round-the-clock vibe. The city also features an eclectic mix of architecture — from Oriental Byzantine to French neoclassical to communist-era apartment buildings — reflecting a variety of cultural influences...