US Embassy in Moscow: No info on Paul Whelan’s whereabouts

MOSCOW (AP) — The US Embassy in Moscow said Tuesday it had no information on the whereabouts of an American convicted in June of espionage, despite reports that he is being transferred to a prison...

American convicted of spying in Russia, gets 16 years

MOSCOW (AP) — A Russian court convicted an American corporate security executive Monday of espionage and sentenced him to 16 years in prison after a closed trial that the U.S. denounced as a...

MOSCOW (AP) — A U.S. diplomat on Monday visited an American jailed in Moscow for nearly a year on spying charges and said he is in good condition mentally.

US man jailed in Russia on spying charges loses job

AUBURN HILLS, Mich. (AP) — A Michigan man who has been imprisoned in Russia on spying charges for nearly a year has lost his job with an automotive parts supplier in a corporate restructuring, a...

US: American jailed in Russia should be freed, not swapped

MOSCOW (AP) — The U.S. Embassy in Moscow says it won’t be looking for a prisoner swap with Russia for an American jailed on spying charges.

Instead, it said Wednesday that Paul Whelan should...

WASHINGTON (AP) — A Michigan security executive who has been detained in Russia on espionage charges since December is being held without cause as his health deteriorates under tough conditions,...

MOSCOW (AP) — A Moscow court has ruled to keep an American man suspected of spying in prison for two more months.

The court ruled on Friday to keep Paul Whelan behind bars at least until...

US Embassy worried about condition of jailed American

MOSCOW (AP) — The U.S. Embassy in Moscow says the condition of an American man held on spying charges in Russia has worsened.

The Embassy said on Twitter Monday that Russian authorities had...

MOSCOW (AP) — The U.S. Embassy in Moscow says that it has officially protested the reported mistreatment of a U.S. national who is kept in jail on spying charges.

American charged with spying in Russia appeals to Trump

MOSCOW (AP) — An American man kept behind bars in Russia on spying charges on Thursday appealed to U.S. President Donald Trump for help.

Paul Whelan was arrested in a hotel room in Moscow at...

WASHINGTON (AP) — The arrest of a Michigan corporate security executive on espionage allegations in Russia seemed to his family like a horrible mistake, a misunderstanding that could be quickly...

MOSCOW (AP) — A Russian court on Friday extended the arrest for a former U.S. Marine charged with espionage, who complained in court about abuse in custody.

MOSCOW (AP) — A Russian court has upheld an earlier ruling to keep a former U.S. Marine in a Moscow jail for three more months as he faces espionage charges. 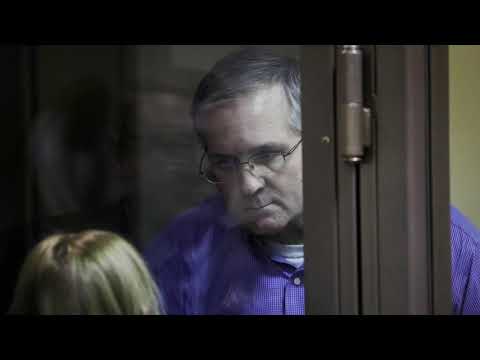 Lawyer: Suspected US spy had classified docs on him

MOSCOW (AP) — The lawyer for an American man being held in Moscow on suspicion of spying said on Tuesday that his client was given a flash drive containing Russian "state secrets" before he was arrested, but did not know he had them and had not looked at them.

His family insisted that he was entrapped and denied that he is guilty of espionage.

MOSCOW (AP) — The brother of an American being held in Moscow for alleged spying says a prison visit by U.S. Embassy staff has been postponed.

David Whelan expressed disappointment that Russian authorities didn't allow the visit scheduled for Thursday, but said he hoped it could be rescheduled soon and British diplomats also would be given access to his twin brother, Paul.

MOSCOW (AP) — The brother of a former U.S. Marine with multiple citizenships says Irish government representatives have visited Paul Whelan at the Russian prison where he is being held on spying charges.

David Whelan said in a Wednesday statement that diplomatic staff members from Ireland reported that conditions were good in the Moscow prison where his brother is detained. The statement says U.S. officials are expected to visit Thursday.