Saudi Arabia says its oil pipeline was hit by drones

DUBAI, United Arab Emirates (AP) — An oil pipeline that runs across Saudi Arabia was hit Tuesday by drones, the Saudi energy minister said, as regional tensions flared just days after what the...

The Latest: Some allies skeptical about US claims on Iran

WASHINGTON (AP) — The Latest on the United States and Iran (all times local):

Some U.S. allies are expressing skepticism about the Trump administration's claims that Iran...

Global worries flare over whether US sliding toward Iran war

WASHINGTON (AP) — International worries that the Trump administration is sliding toward war with Iran flared into the open Tuesday amid skepticism about its claims that the Islamic Republic poses...

The Latest: Khamenei says Iran won’t negotiate with US

DUBAI, United Arab Emirates (AP) — The Latest on developments in the Persian Gulf, elsewhere in Mideast, amid heightened tensions between the U.S. and Iran (all times local):

MADRID (AP) — Spain's decision to remove a frigate on training exercises from a U.S. combat fleet that is approaching the Persian Gulf was taken purely for "technical reasons," the country's...

EU calls for calm, warns US-Iran of conflict ‘by accident’

BRUSSELS (AP) — European foreign ministers urged the United States and Iran to show restraint Monday amid fears of tensions tipping them easily into armed conflict, while Secretary of State Mike...

Reports that commercial ships have become targets of alleged sabotage near the Strait of Hormuz have focused new attention on the region as tensions have risen. A look at the key...

UAE says 4 ships targeted by ‘sabotage’ off its east coast

AP EXPLAINS: Why send a US aircraft carrier to the Gulf?

DUBAI, United Arab Emirates (AP) — The USS Abraham Lincoln aircraft carrier strike group is being deployed to the Persian Gulf to counter an alleged but still-unspecified threat from Iran, the...

US deployments across Mideast factor in Iran tensions

BAGHDAD (AP) — The prime minister of Iraq says he has instructed his country's Oil Ministry to finalize an agreement with global energy giants ExxonMobil and PetroChina to lead a $53 billion...

FIFA assured human rights groups on Saturday it will talk to them about risks associated with expanding the 2022 World Cup in the Persian Gulf beyond host Qatar before taking a final...

MIAMI (AP) — Concerned by political and logistical impediments, FIFA will face resistance in Qatar to attempts to expand the 2022 World Cup to 48 teams and spread games across the Persian Gulf,...

LONDON (AP) — Persian Gulf countries would have to lift boycotts of Qatar before being eligible to join hosting of the World Cup, FIFA determined in a feasibility study recommending its ruling...

Iran announces another navy drill in key Strait of Hormuz

TEHRAN, Iran (AP) — Iran's navy says it will hold an annual drill in the strategic Strait of Hormuz as pressure mounts on the country months after the United States re-imposed sanctions on Iran,...

Iranian president: US sanctions are ‘economic war’ on Iran

TEHRAN, Iran (AP) — Iran's president on Monday described U.S. sanctions imposed on Iran as an economic war being waged on his country and stressed that "economic war is more difficult than military war." 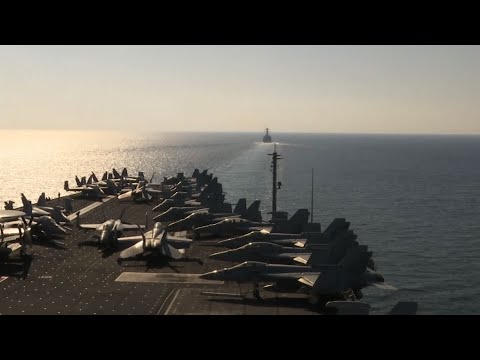 ABOARD THE USS JOHN C. STENNIS IN THE PERSIAN GULF (AP) — — A U.S. aircraft carrier sailed into the Persian Gulf on Friday, becoming the first since America's withdrawal from the Iran nuclear deal in May and breaking the longest carrier absence in the volatile region since at least the Sept. 11 terror attacks.

TEHRAN, Iran (AP) — Iranian President Hassan Rouhani on Tuesday repeated his threat to close the Strait of Hormuz, the passageway for nearly a third of all oil traded by sea, if the U.S. shuts off Iran's oil exports.

State TV quoted Rouhani as saying that "if someday, the United States decides to block Iran's oil (exports), no oil will be exported from the Persian Gulf."

The strait at the mouth of the Persian Gulf is crucial to global energy supplies.

AL-JAHRA, Kuwait (AP) — On the outskirts of Kuwait City, the love Kuwaitis have for former U.S. President George H.W. Bush could be seen in 2016 on a billboard one Bedouin family put up to announce their son's wedding.

That son being Bush al-Widhan, born in the aftermath of the 1991 Gulf War that saw U.S.-led forces expel the occupying Iraqi troops of dictator Saddam Hussein.

The report said one of the mini submarines — also known as midget submarines — was dubbed Ghadir-955 and was built in 18 months. The other, a previously built Ghadir-942, took 10 months to overhaul.

DOHA, Qatar (AP) — Adding 16 teams to the 2022 World Cup is about far more than sports. The head of world soccer thinks the proposal can help solve the bitter diplomatic fight between host Qatar and a Saudi Arabian-led coalition trying to isolate the tiny nation.

ABOARD THE USS ESSEX, Persian Gulf (AP) — Soon after the top U.S. commander in the Middle East boarded the USS Essex in the Persian Gulf, he could see one Iranian fast boat race across in front of the ship, while another shadowed it from the side.

ABOARD THE USS JASON DUNHAM, Persian Gulf (AP) — The huge pile of rusting AK-47 assault rifles is tucked into a corner below the deck of the USS Jason Dunham, serving as a grim reminder of how hard it is to catch weapons smugglers believed to be trafficking arms into Yemen.

On Thursday U.N. inspectors boarded the American guided-missile destroyer, to examine the more than 2,500 guns the crew seized in late August and determine if suspicions are true that the weapons originated in Iran.

PressTV's website says the encounter occurred March 21 in the strategic Strait of Hormuz in the Persian Gulf, the passageway for nearly a third of all oil traded by sea. The TV agency says the video was aired Saturday as part of a documentary.

TEHRAN, Iran (AP) — Iran's president on Sunday accused an unnamed U.S.-allied country in the Persian Gulf of being behind a terror attack on a military parade that killed 25 people and wounded 60, further raising regional tensions.

TEHRAN, Iran (AP) — Iran's air force is carrying out a drill near the strategic Strait of Hormuz in the Persian Gulf, the passageway for nearly a third of all oil traded by sea, the country's official IRNA news agency said Friday.

US Navy says over 2,500 assault rifles found in Gulf seizure

The Navy's Bahrain-based 5th Fleet gave the updated total in a statement Wednesday. It boarded the skiff and the dhow, a traditional ship in the Persian Gulf, during a routine check in the Gulf of Aden on Aug. 28.

The Navy added: "The origin and intended destination of the skiff have not yet been determined."

DUBAI, United Arab Emirates (AP) — The U.S. military said early Friday it seized over 1,000 Kalashnikov assault rifles being smuggled by small ships in the Gulf of Aden amid the ongoing war in nearby Yemen.

The seizure by the guided-missile destroyer USS Jason Dunham may mark the first such interdiction of weapons at sea bound for Yemen in years for American forces patrolling the region.

However, the military did not say whom they suspected of smuggling the weapons.

US to keep Persian Gulf waterway open despite Iran threats

DUBAI, United Arab Emirates (AP) — The U.S. military is reiterating a promise to keep Persian Gulf waterways open to oil tankers as Iran renewed threats to close off the region.

Capt. Bill Urban, a spokesman for the U.S. military's Central Command, told The Associated Press on Wednesday that American sailors and its regional allies "stand ready to ensure the freedom of navigation and the free flow of commerce wherever international law allows."

DUBAI, United Arab Emirates (AP) — Mourners tossed flowers from a helicopter and a ferry into the Persian Gulf off the coast of Iran on Tuesday to mark the 30th anniversary of the U.S. Navy shooting down an Iranian commercial airline, which killed 290 people.

DUBAI, United Arab Emirates (AP) — It's been a year since three of Qatar's neighbors plus Egypt severed ties with the Gulf state, cut off exports, expelled their citizens and banned Qatari flights from using their airports and airspace.