NEW YORK (AP) — The first time Pete Davidson performed stand-up, he was 16. It was in front of a handful of people at a place called the Looney Bin Comedy Club in Staten Island. He describes it as...

Review: Davidson steps up in ‘The King of Staten Island’

The protagonists in Judd Apatow movies don’t generally have their stuff together. They are emotionally stunted, occasionally underachieving, unmotivated to change and often even border on...

NEW YORK (AP) — Judd Apatow's “The King of Staten Island," starring Pete Davidson of “Saturday Night Live," will make its premiere as the opening night film at this year's South by Southwest Film... 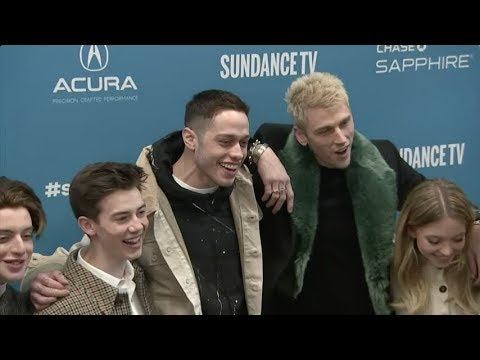 Grande was originally scheduled to perform at The Chelsea at The Cosmopolitan of Las Vegas on Saturday. The hotel said Friday in a statement to The Associated Press that the pop star will not perform.

The hotel said guests can receive refunds at their point of purchase.

NEW YORK (AP) — New York City police were concerned about Pete Davidson after he wrote "I don't want to be on this earth anymore" on Instagram. And they visited the "Saturday Night Live" star to make sure he was OK.

A police spokesman declined to say where officers met with Ariana Grande's ex-fiance on Saturday. But his Instagram posting was deleted and NBC did not cancel its live show.

After a year full of tears, Ariana Grande comes out on top

NEW YORK (AP) — Ariana Grande capped off a successful year as a pop star — but a trying one as a maturing young woman — at the 13th annual Billboard Women in Music event, where she was named Woman of the Year.

NEW YORK (AP) — "Saturday Night Live" cast member Pete Davidson has apologized for mocking the appearance of a veteran who lost an eye in Afghanistan.

He says Lt. Com. Dan Crenshaw, now a congressman-elect from Texas, "deserves all the respect in the world."

On SNL's "Weekend Update" segment , Davidson was joined by Crenshaw, a Navy SEAL.

HOUSTON (AP) — A Texas Republican congressional candidate has chided "Saturday Night Live" comic Pete Davidson for poking fun at the eyepatch he wears because he was badly wounded during his third tour in Afghanistan as a Navy SEAL.

By The Associated PressNovember 4, 2018 GMT

Ariana Grande tears up as she recalls Manchester tragedy

The singer cried during an interview Friday with Ebro for Beats 1 on Apple Music as she shared thoughts on the 2017 concert in England, when a suicide bomber killed 22 people.

She said that terrorists "want you to be afraid," adding that those who just heard about it in the news had moved on. But for her and others, the challenge became just to "live in the moment" and not be overwhelmed by fear.

Pete Davidson talks to GQ about love and Ariana Grande

In September's GQ magazine, Davidson says he told Grande on the day he met her, "Hey, I'll marry you tomorrow." He says she was calling his bluff and he sent her a picture of engagement rings. He says Grande told him those were her favorites and he replied "Sick."

Fallon put Davidson on the spot Wednesday, telling him he didn't have to get engaged to the pop star to come on the talk show.

Replied Davidson: "But I did, though."

When Fallon congratulated him and shook his hand, Davidson said he felt like he'd won a contest.