Princess Eugenie and husband pick a name for their baby son

Eugenie, a granddaughter of Queen Elizabeth II, and her husband, Jack...

Queen Elizabeth II attends yet another wedding at Windsor

LONDON (AP) — Queen Elizabeth II and other royal family members have gathered at St George's chapel in Windsor for the wedding of the daughter of the monarch's first cousin.

New baby alters line of succession for the British throne

The birth of a royal baby boy to Prince Harry and his wife Meghan, the Duchess of Sussex, has changed the line of succession. The baby's name has not been released yet but here are the first 10...

With two blockbuster British royal weddings this year and an enduring fascination with the Brits, American brides craving a regal look with personal twists can find plenty of inspiration.

While royal wedding fashion will have an influence on bridal trends in the United States, American brides are continually looking for ways to personalize their wedding to reflect their own style. The royal brides, the former Meghan Markle and Princess Eugenie, did just that.

LONDON (AP) — The royal wedding of Princess Eugenie and Jack Brooksbank was a big hit in terms of British TV viewership.

ITV was the only U.K. broadcaster that showed the entire service live from St. George's Chapel.

It was the second wedding extravaganza of the year for the royal family, which seems to be riding a wave of popularity as the younger generation comes to the fore and the widely-respected Queen Elizabeth II cuts back slightly on her public appearances. 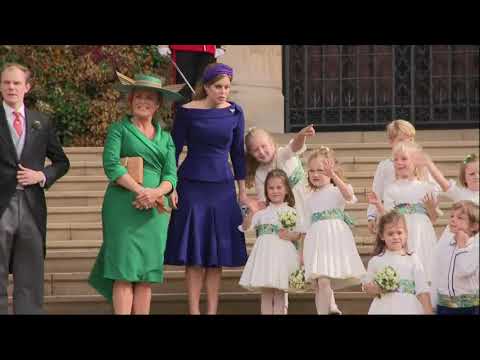 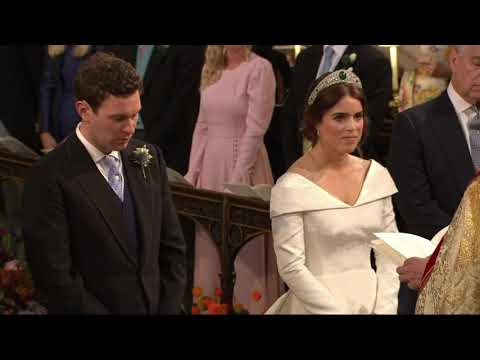 LONDON (AP) — The Latest on the wedding of Princess Eugenie and Jack Brooksbank (all times local):

Princess Eugenie is wearing a gown designed by Peter Pilotto and Christopher De Vos for her wedding to Jack Brooksbank.

The dress features a neckline that folds around the shoulders to a low back that drapes into a full-length train.

The bride is also wearing the Greville Emerald Kokoshnik Tiara, which was loaned to her by her grandmother, Queen Elizabeth II.

WINDSOR, England (AP) — It's time for another royal wedding at Windsor Castle — but this time it's less of a global TV spectacle and more of a family affair.

LONDON (AP) — Prince George and Princess Charlotte will be among the pageboys and bridesmaids at the wedding of Princess Eugenie and Jack Brooksbank.

LONDON (AP) — There will be military fanfare and red velvet cake when Princess Eugenie weds this week — Britain's second royal wedding of the year.

The 28-year-old granddaughter of Queen Elizabeth II is due to marry liquor company executive Jack Brooksbank on Friday in St. George's Chapel at Windsor Castle.

Prince Harry, her cousin, and American actress Meghan Markle married at the same venue in May.

Eugenie, the 27-year-old daughter of Andrew and his ex-wife Sarah Ferguson, will marry Jack Brooksbank at St. George's Chapel in Windsor.

LONDON (AP) — It will be a busy year for royal weddings: Princess Eugenie is engaged to be married later this year, several months after her cousin Prince Harry's nuptials.

Eugenie, the daughter of Prince Andrew and his ex-wife Sarah Ferguson, will marry Jack Brooksbank in the fall, Buckingham Palace said Monday.

The palace said that the wedding will take place at St. George's Chapel in Windsor. Prince Harry and his American fiancee Meghan Markle will marry at the same chapel in May.

There were spring weddings all across England on Saturday, but only Pippa Middleton's nuptials featured two likely future British kings on the guest list.

That would be her brother-in-law, Prince William, and her nephew, Prince George.

The prince issued a strongly worded personal statement on Friday calling for an end to "speculation and innuendo" about his daughters, and denying reports of a feud with big brother Prince Charles.

Andrew, the third of Queen Elizabeth II's four children, slammed recent newspaper stories that he said "have no basis in fact."